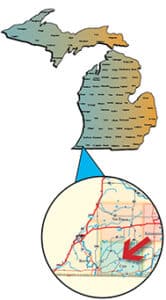 Located in Ontwa, Mason, Jefferson, and Calvin townships in southern Cass County, the three lakes of Christiana, Juno, and Painter are connected and managed as one water body since water, boats, and fish can freely move between the lakes.

“DNR Fisheries will continue to manage Christiana, Juno, and Painter lakes as a warmwater fishery,”wrote fisheries biologist Matt Diana in a summary of a 2017 survey of the fishery in the lakes. “Bluegill, black crappie, yellow perch, pumpkinseed, and largemouth bass continue to be the primary game fish, and natural reproduction is supporting these populations. The fisheries are of acceptable quality, and there is no need for special regulations.”

The lakes have a long history of fishery management, most of which consisted of surveys of the fisheries.

Yellow perch, largemouth bass, and bluegill were stocked into Christiana Lake between 1933 and 1941. Stocking was discontinued in 1941, and no DNR stocking has occurred since.

In the most recent survey of the lakes, the DNR collected a total of 2,863 fish representing 37 species.

Bluegill was the most abundant species found in the survey and featured fish up to 9 inches. A large portion of the ’gills, however, were stunted, and the average length was just 4.4 inches.

“Length frequency of bluegill captured also show lower abundance of larger bluegill (6-9 inches) compared to smaller size classes,” Diana wrote. “This results in size structure scoring ranging from poor to satisfactory. Growth rates for young bluegill were average. This pattern indicates that there is not a resource limitation issue that is causing competition for food and reduced growth resulting in a stunted bluegill population.

“The low density of large bluegill is most likely allowing for increased growth… It is unclear what is causing the low density of larger fish… Despite the low density, larger bluegill are available for harvest and good growth rates should allow smaller fish to recruit to larger sizes when they are not harvested. The current population should be able to support harvest as mortality rates were not excessive at younger life stages.”

“Pumpkinseed, black crappie, and yellow perch populations provide acceptable fisheries on Christiana, Juno, and Painter lakes,” Diana wrote. “An abundance of snails and zebra mussels throughout the lakes serves as a valuable food source for pumpkinseeds, and growth is rapid. Two master angler pumpkinseed (10 and 9.75 inches) were submitted for Juno Lake in 2018.

“Yellow perch were available in average numbers, but few large fish were present. Black crappie growth was good, and catch rates were similar to other regional lakes. There were good numbers of fish from 8 to 10 inches available that are large enough to harvest and support a fishery,” Diana wrote.

The DNR nets also produced decent numbers of hybrid sunfish and warmouth, both ranging up to 9 inches.

The survey summary stated that largemouth bass was the most abundant sportfish predator captured during the 2017 survey. They averaged 10 inches, but ranged up to 18.

“There was an abundance of fish in the 13.0-14.9 inch size range,“ Diana wrote. “Growth rates dropped once fish reached age 5 and 14 inches in length. A decrease in length-at-age for older fish could be a result of competition for resources and limited prey, or size selective harvest of older fish. Largemouth bass up to age 9 were captured, but average length did not reach legal size (14 inches) until age 6. Despite reduced length-at-age for fish age 6 and older, there are decent numbers of fish above the 14-inch minimum size limit. This would suggest harvest is likely not causing poor survival to older age classes.“

The survey also found light numbers of northern pike to 38 inches, three walleyes between 21 and 23 inches, and one 13-inch smallmouth bass.

“Northern pike and walleye were captured in low numbers but were growing well. Coolwater habitat is limited; however, these fish persist and are creating a low-density fishery,” Diana wrote.

There is a DNR boat access site on a channel on the southern shore of Juno Lake with 16 parking spaces allowing the public to access all three lakes. The channels of Juno Lake and the channel connecting Juno to Painter Lake have “no wake” restrictions. Painter Lake also has prohibitions on operating a vessel at high speeds and having a person in tow from 6:30 p.m. to 10 a.m. the following day.