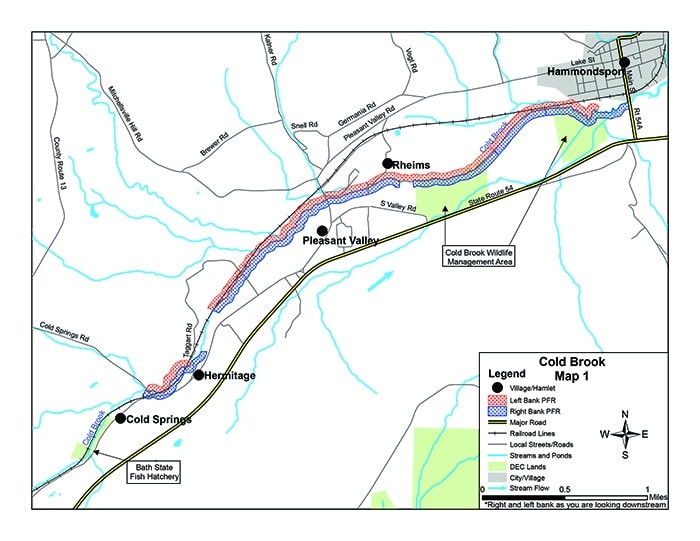 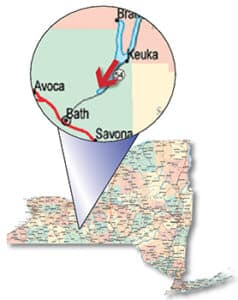 Is it Cold Brook, or is it Keuka Lake Inlet? That likely depends on who you ask and what map you’re looking at.

Either way, the two names refer to one stream: a trout water managed primarily for rainbow trout. And, the closer you get to Keuka Lake itself, where small boats can navigate a short distance upstream, the chance for lake trout and trophy rainbows also rises.

The Keuka Lake Inlet (Cold Brook) Public Fishing Rights are permanent easements purchased by the New York State Department of Environmental Conservation from landowners allowing anglers the right to fish and walk along the stream-bank for the purpose of fishing only.

From Hammondsport, at the mouth of the streams, southwest to just north of the Bath State Fish Hatchery, there are roughly 3.5 miles of PFR available to anglers. This includes a section in the two parcels of the Cold Brook Wildlife Management Area, which, however, includes some wetlands to navigate through.

DEC says April is a busy month on the banks of Cold Brook. A 2017 angler survey estimated 2,200 angler hours during April.

The spring runs of rainbow trout and sometimes the fall runs of brown trout offer some of the best seasonal trout fishing in New York state, DEC says.

As for stocking, DEC has backed off numbers in recent years in anticipation of a more reliable natural reproduction rainbow trout fishery.

DEC says that rainbow trout were first introduced into Cold Brook in 1897, and subsequent stocking throughout the early 1900s led to the establishment of a naturalized, self-sustaining population supporting a fishery both in the lake as well as Cold Brook.

The agency said the need to supplement the existing rainbow trout population with stocked fish is the result of several factors including abundant lake trout populations from Keuka Lake, stream blockages and subsequent channel diversions inhibiting upstream spawning migrations, and potential competition with resident stream trout. DEC is working to address lake forage declines through an experimental reintroduction of ciscos in Keuka Lake, a native forage fish that had recently reached undetectable levels in the lake. Additionally, more restrictive harvest regulations (i.e. one rainbow trout creel limit) in the lake and tributary were enacted in 2012.

As for brown trout, and their relation to rainbows, DEC said wild brown trout populations exist in Cold Brook. However, while providing an additional angling opportunity, they may also be hampering rainbow trout.

The Cold Brook Wildlife Management Area covers 116 acres and is located at the southern end of Keuka Lake. There are two separate parcels located north of Route 54 and south of the Keuka Lake Inlet/Cold Brook in the village of Hammondsport. Both border the stream and PFR.

Cold Brook trout habitat was heavily impacted by flood events that occurred in January and November of 1996. This in-stream habitat is presently being restored under the Cold Brook Aquatic Habitat Restoration Project.

Finger Lakes tributary regulations apply. These include for trout (lake trout, brown trout, rainbow trout) and, landlocked salmon. The daily catch rate is three, in combination, with no more than one rainbow trout. The size limit is 15 inches. These regulations apply to the first impassible barrier. For further regulations visit .dec.ny.gov/outdoor/31417.html

Keuka Lake Inlet is located in Steuben County be- tween the towns of Bath and Hammondsport. A good portion of the stream is accessible through Public Fishing Rights easements, of which there are approximately 3.5 miles.

The 116-acre Cold Brook Wildlife Management Area is also nearby and allows hunting and trapping and is part of the Keuka Lowlands.