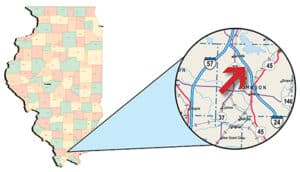 Overall, the 2019 sampling of Dutchman Lake by DNR resulted in discouraging population numbers for bluegills, channel cats and crappies.

But those fish appear headed for a comeback and the largemouth bass population has shown signs of breaking out.

Only one bass tournament was recorded during 2019 – that event produced two bass weighed in at the 5-pound mark.

In its 2019 sampling, DNR collected and released one bass that topped the magical 7-pound level.

Dutchman Lake, located north of Vienna, has 116 acres of quiet angling. Some might even call it serene.

But there are plenty of fish, thanks to some solid habitat. There is a good mix of weeds here, including milfoil and some coontail. Another good place to target is along the rocky wall on the southwest side of the lake. There is a marginal boat ramp at the other end, with a 10-horsepower limit in effect.

Fishing enthusiasts, from the worm-and-bobber crowd to those on the tournament circuit, have a field day when the waters warm and the fish begin to feed actively. The fun for many continues throughout the warm months and into mild southern Illinois winters.

The lake is surrounded by forest and has a gravel access road and boat ramp.

DNR’s most recent survey of the lake produced the following notes from fisheries biologists:

Ten of the bass sampled measured more than 18 inches and the largest was over 7 pounds. Bass body condition increased in 2019 and met the management plan goal.

Bluegill were less abundant in Dutchman Lake during the 2019 survey. The bluegill catch rate was 24 per hour, a severe decrease compared to the previous year.

Only 13% of these fish were larger than 6 inches, and no fish exceeded 7 inches in length. Bluegill body condition decreased as well.

“These severe decreases are not likely related to changes in population, but the vegetation control activities that occurred only two weeks before sampling was conducted,” DNR explained in its report on Dutchman Lake.

Redear were collected at a rate of 10 per hour in 2019 and quality decreased. Fifty percent of these fish were larger than 7 inches in length, and no fish were longer than 8 inches.

Redear body condition continued to drop below the management goal range. As with bluegill, it’s believed the poor sample is correlated to vegetation treatment activities.

Three white crappie were sampled (4-7 inches in length) that had substandard body condition.

The channel catfish population is maintained by annual or biennial stockings depending on fish availability.

Nearby, Ferne Clyffe is surrounded by many other public lands offering outdoor recreation opportunities.

The Shawnee National Forest has several public use areas close to Ferne Clyffe including a boat ramp and campground on the south side of Lake of Egypt and Dutchman Lake also open to fishing.

Looking for a challenge? Take your bass or crappie rig and motor the nearby mighty Ohio River and its famous Smithland Pool.

“It gets a lot of recreational boat traffic,” said Brian Kinter, a fisheries biologist for the ODNR Division of Wildlife