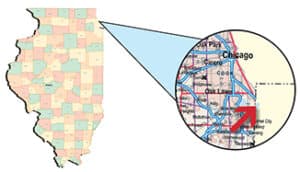 Good-sized northern pike have long been the jewel of Wolf Lake, an odd configuration of pools that straddle the Illinois-Indiana border.

It’s a shallow 800-acre lake that is well vegetated and has clear water, which is perfect for pike. In the past, anglers have reported pike larger than 12 pounds. DNR typically collects fish up to 28 inches. Also, some hybrid muskies are hooked, but they usually come from the Indiana side, as Illinois has not stocked them since the 1990s.

To understand the fishing at Wolf Lake, you must understand the lake’s history. Prior to 1947, Wolf Lake was a small, shallow glacial lake situated in a wetland area between the confluence of the Grand Calumet and Calumet rivers.

Since then, the lake and its fishery have developed into a haven for fishermen to enjoy some quiet time away from the hustle and bustle of Chicago.

The Illinois portion of Wolf Lake consists of 390 acres of water and is managed by DNR. That portion of the lake is abutted by William Powers State Recreation Area, a 600-acre mixed-use nature and recreation site.

As for the lake, which takes up much of the total site’s acreage, the maximum depth is 15 feet and the average depth is five feet. There are three developed boat ramps at the site, but no concession or fish cleaning facilities available.

In recent samplings, largemouth bass measured 7 to 19 inches and weighed up to 3.6 pounds; 68 percent were greater than 12 inches long and 30 percent were over 14 inches. This size structure creates high reproductive potential to maintain the population and manages for larger panfish, DNR reported.

Channel catfish collected as part of a special survey weighed up to 4.6 pounds.

In its survey, DNR found 15 percent of the bluegills captured exceeded 6 inches. They ranged from 2 to 8 inches, the largest weighing 0.48 pounds. Abundant aquatic vegetation provides hiding cover for bluegills and reduces predator efficiency, but since the lake includes some pondweed species, it’s a balancing act between managing vegetation and protecting listed species.

A closer look at the site: Despite years of environmental damage caused by heavy industries, transportation infrastructure, urban runoff, and filling of wetlands, Wolf Lake continues to be one of the most important biological sites in the Chicago region.

The lake was once connected by an open channel to Lake Michigan on the Indiana side of the lake, but this channel was cut off for development on its northern side. The Illinois portion of the lake is broken into five smaller impoundments separated by dikes.

The dikes were constructed in the late 1950s so that separate portions of the lake could be drained for the purpose of dredging for fill to use in the construction of the Chicago Skyway.

The western impoundments are now part of the William W. Powers State Recreation Area and are drained by Indian Creek to the Calumet River.

A significant portion of the property around the lake is now parkland or nature preserve, including the Eggers Woods parcel of the Forest Preserve District of Cook County.