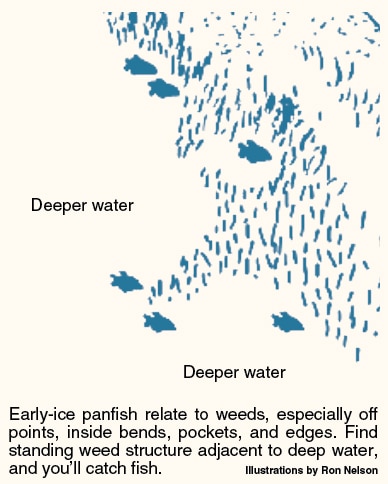 Like most fish species, bluegills and crappies are super-active during the early-ice period. Their fall feeding binge extends into those first few weeks of hard water, so you can encounter a good bite, if you know where to look.

With light still penetrating through the first sheet of walkable ice, those green weeds are usually standing tall. In the best scenario, they’re adjacent to deeper structure, which they’ll migrate to once the vegetation dies off.

Before that happens, they’ll relate not just to green weeds, but also to subtle turns, points, or pockets within them. Look for anything that might act as a holding area, especially if you’re investigating a highly weeded stretch of water.

Many times, these will be shallow weeds, less than 10 feet deep, which typically come alive with activity early and late each day. If water clarity allows, this is a sight-fishing opportunity.

Mid-depth weeds, somewhere in the 10- to 15-foot range, are the next best option if you can’t find shallow vegetation. More times than not, these slightly deeper areas provide thinner weeds. Bluegills and crappies may relate here if it’s the only cover and food source they can find.

If weeds are limited, or in some lakes where quality vegetation isn’t available, locate other early-season locations. Again, consider those that held panfish in the fall.

Mud flats, sand grass, rocks, and sunken wood also provide some cover and ambush points for pods of crappies and bluegills at first ice. These areas tend to be productive longer into the ice-fishing season.

Consider hardstem bulrushes, channels between lakes, and even boat harbors. If any of them have some depth, there’s a good chance they held panfish in the fall and will continue to at first ice.

Many times, these areas are productive on big, deep lakes that hold quality panfish but typically aren’t noted for producing them. Think large, basin-type lakes with more of a reputation for walleyes, but contain panfish. They’ll use these shallower areas for food and cover as well.

There’s always a chance that panfish will suspend over deep water at first ice, especially in a lake that contains relatively little structure.

But rarely do you need to chase these roaming schools of fish early in the season. They might not even be accessible thanks to the thinner ice you’ll have over shallow water areas.

Small, shallow lakes and bays off big water lock up earliest and provide not just the safest first-ice option, but also often the only option.

Wind-protected lakes or those tucked in the woods also tend to lock up with walkable ice early. Many of these hard-to-reach lakes see minimal fishing pressure and hold lots of quality bluegills and crappies. Keep these secret spots in your back pocket.

If your end game is to catch magnum bluegills and hubcap-sized crappies at first ice, research plays a role as well.

While it’s relatively easy to catch panfish on most lakes, many don’t have the ability to produce large bluegills and crappies. Those that do are worth finding, so dig a little and find them first, before the masses hit the ice.