Twins, indeed, but identical? Not when it comes to fishing 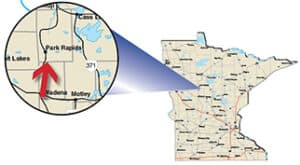 Sitting tight to the Wadena-Hubbard county line, Upper and Lower Twin lakes are connected by a small stretch of the Shell River, which runs through the lakes.

These are small lakes, combining for just 463 acres of fishable water. They’re different in physical characteristics, but not in the fish they produce.

Upper Twin is shallow, with a maximum depth of 12 feet, while Lower Twin offers much deeper water. Fish have the opportunity to move between the lakes through the Shell River channel, which provides decent fish-catching opportunities on both.

Anglers frequent Upper and Lower Twins quite regularly for panfish, although walleyes garner some attention during certain times of the year as well. There are some quality northern pike to be had, along with the chance to catch largemouth and smallmouth bass.

“Habitat-wise, both are great for panfish, so they’re a popular choice for local anglers year-round,” said Calub Shavlik, acting DNR Fisheries supervisor in Park Rapids. “People have the opportunity to catch good numbers of keeping-size bluegills, pumpkinseeds, and crappies.”

Generally, the majority of bluegills and pumpkinseeds are going to be right around 7 inches in length, with some 8-inch fish tossed in. Crappies tend to be less numerous, cyclical by nature, with 9- to 10-inch fish at the top end of the measuring tape.

According to Brad Snyder, owner of the Shell Sport and Bait in Menahga, the lack of super-sized panfish doesn’t seem to limit the interest among local anglers on these lakes.

The upside for most is that you can almost always put a mess of decent panfish together, and it doesn’t seem to matter what time of year it is.

“They’re keepers – not huge panfish – but there are good numbers of them,” Snyder said. “The Twin lakes are two of the main lakes in this area known for good, year-round (panfish) fishing.”

Lower Twin Lake is stocked with walleyes, while Upper Twin is not. But there is some limited natural reproduction that occurs, and – via the river connection – fish have the ability to move between the lakes, so both contain walleyes.

Lower Twin is the more highly regarded walleye lake because it tends to produce more fish throughout the year. Upper Twin has its moments of walleye production, mainly in the spring at its inlet and outlet areas.

During a 2018 DNR survey, gill nets averaged almost four walleyes per lift on Lower Twin. That’s remained pretty consistent compared with past surveys. And considering the lake is only 251 acres in size, that’s a respectable number.

“People catch more walleyes on Lower Twin in the spring, late fall, and early ice,” Snyder said. “It has more windows, while Upper Twin is better in the spring.”

Both lakes have healthy northern pike populations, which tend to be maintained by exceptional spawning habitat and a strong forage base in the way of yellow perch and river species such as suckers and redhorse, as well as some tullibees in Lower Twin.

Pike sampled during the 2018 survey of Upper Twin averaged nearly 3 pounds, with fish up to 37 inches measured. On Lower Twin, pike over 38 inches were sampled, and they also had an average weight of just more than 3 pounds.

“The (northern pike) population is moderate to slightly above average,” Shavlik said. “Both lakes can produce nice, average-size pike.”

Largemouth and smallmouth bass are present in both lakes, although their numbers are limited. Largemouths tend to be more widespread, and there tend to be a few more smallmouths in Lower Twin.

Most smallies are caught at the inlet and outlet areas, according to Shavlik.