Hargus Creek in central Ohio is a diverse fishery 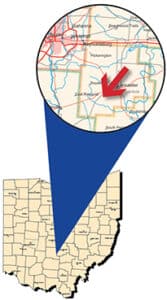 Circleville, Ohio — While it has the distinction of being one of the first inland lakes in Ohio to be plagued by zebra mussels, Hargus Creek Lake in central Ohio does have many other redeeming merits.

For one, the water is fairly clear for the most part, thanks to the filtering function of said mussels. While clear isn’t the preferrable shade for good fishing most of the time, it might make for a more pleasant boat ride.

However, in recent years some weeds have begun to appear in Hargus, making the water a little less clear and more green. Better for fishing.

There are fish in Hargus Creek Lake such as largemouth bass, channel catfish, crappies, and bluegills. And, it’s deep at about 50 feet in the depths of the main channel. The average depth is about 20 feet in this small, 152-acre impoundment.

There is a restriction on boats with electric motors only on this scenic, central Ohio lake.

Crappies at Hargus were previously on a list of Ohio lakes with a 9-inch keeper requirement, but that regulation has since been pulled. There is a good population of crappies, primarily of the black variety.

“It was on a list of lakes where we either thought (the regulation) was hurting or not making a difference at all,” said Nick Radabaugh, a fisheries biologist for the Division of Wildlife in Columbus. “But, we’ll continue to keep an eye on that.”

Being right in Circleville with U.S. 23 passing through, Hargus Creek consistently gets a lot of fishing pressure, said Radabaugh.

“It’s got a pretty good diversity of fish to fish for,” he said. “It’s a very popular bass lake. A lot of times you’ll see big bass boats down there even though they can only use their trolling motor.”

As far as other panfish go, there are good numbers of bluegills and redear sunfish, according to Radabaugh.

Hargus Creek might be a good place to try your luck on the ice this winter with good numbers of those tasty panfish under the hardwater. Good spots to try would be in the many backwater areas and coves that meander around the lake.

The only species fisheries personnel stock at Hargus is channel catfish, but it gets plenty of them. Channel cats have been stocked since at least 1995 and there is a good population although reproductive success has been absent, according to the division. Most fish range from 12 to 22 inches. There is a regulation on Hargus Creek that limits daily keepers to six catfish, only one of which may be 28 inches or larger. That is the statewide limitation for channel catfish on lakes less than 700 acres.

The lake does also have some flathead catfish, said Radabaugh.

Division of Wildlife surveys indicate most largemouth bass are in the 10- to 13-inch range, but there are good numbers of bigger bass also, according to author Tom Cross’ book Fishing Ohio.

There is a special regulation for largemouth bass at Hargus Creek that was implemented in 2013. It is a four-fish split limit: You can keep two bass over 15 inches and two bass under 15 inches daily.

“The goal of that regulation was to get people to harvest some fish,” Radabaugh said. “That’s really a hard thing to do. (Catch and release) has kind of been ingrained.”

“Most bass fishing consists of fishing shoreline structures, rocky banks, deep-weed edges, and rip-rap,” Cross writes in his book. “Plastics and spinnerbaits work well in the weeds. You will find bass anywhere on this lake. There are plenty of steep banks, deep cover, and rocky points.”

Bass are certainly the most popular species at Hargus Creek, but there is a diversity of anglers who also seek crappies, bluegills, and catfish.

“For the bass population, there are really good numbers,” Radabaugh said. “There are a lot of fish in that 10- to 13-inch range. But, what’s interesting is that if fish can get through that bottleneck you can actually find some really big (bass) out there. I know fish are consistently caught in the 6- to 7-pound range.”

Hargus Creek was formed in 1956 for recreational purposes. It was drained and renovated in 1985, including a restocking of channel catfish, largemouth bass, and bluegills. The lake is within A.W. Marion State Park and many of the locals refer to the lake as A.W. Marion Lake. The park’s namesake was the first director of the DNR, but it wasn’t named for him until 1962. Prior to that, it was known as Hargus Creek Lake State Park, according to the Division of Wildlife.

Two modern launch ramps serve boaters on the west side of the lake off State Route 188. A woodland campground on state park property offers primitive campsites and there is another, private, campground near the boat ramps.

Recreational pressure isn’t a problem here because of the electric motor prohibition and the lack of a beach. A walking path does wind around the 4.6-mile lakeshore, which is utilized by hikers and anglers alike. The trail passes through woodlands, creeks, and ravines as it makes its way from the campground to the boat docks.

The northern end of the lake has good stretches of flooded timber, which might not be a bad bet for early season wood duck shooting in the fall. The park allows hunting in some parts for squirrel, deer, rabbit, pheasant, and waterfowl.

A grant from BHE GT&S, a Berkshire Hathaway Energy Company, supports a key aspect of Chestnut Ridge Chapter of Trout