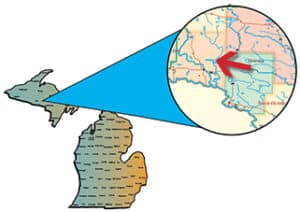 At 6,400 acres, the Michigamme Reservoir is the largest of 59 lakes in the Upper Peninsula’s Iron County. From a fishery perspective, anglers catch a little bit of a lot of species with a spotlight on walleyes and northern pike. Panfish, muskies and smallmouth bass also attract a good amount of angling attention.

An impoundment on the Michigamme River, the reservoir rests in east-central Iron County, about four miles northwest of the town of Channing (Dickinson County).

The surface area of Michigamme Reservoir fluctuates depending on the amount of water allowed to drain over the Way Dam. In the summer it covers about 6,400 acres, but during winter drawdown it is reduced to about 3,700 acres.

The Deer, Fence, and Michigamme rivers, along with Margeson and Clark’s creeks all feed the reservoir, which features about 125 miles of shoreline including several islands, points, bays and coves.

Michigan’s Master Angler  records indicate that six fish caught in Michigamme since 2016 qualified for recognition including two bluegills over 10 inches each, two pumpkinseed sunfish (11.75 and 9.75), a 14.13-inch crappie and a 12.75-inch rock bass.

The most recent DNR survey of the fishery in the reservoir turned up 15 species including  2,471 walleyes averaging 15.3 inches, and 1,861 northern pike averaging 19.4 inches.

“Walleyes in Michigamme Reservoir were represented by 16 year classes in our samples,” DNR fisheries biologist Patrick Hanchin wrote in a summary of the survey.  “…Thus, we conclude that natural reproduction of walleyes is sufficient to maintain the current population, although the current population density is below average to average compared to other lakes.”

Although the survey didn’t produce any muskies, local anglers do report catching good numbers of them.

Crawler harnesses and crankbaits produce good walleye action. Try trolling around the island in the northeast corner of the lake or along the steep breaks near the Deer River inlet at the west end.

Most fishing occurs during the warm-weather seasons, but there is also good ice fishing on Michigamme Reservoir.

There are several access sites on the reservoir including one off Channing Road and  one off Way Dam Road.