Open water is great, but fishing bloom is off Rose in winter 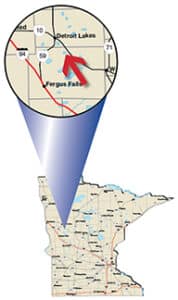 Otter Tail County anglers are quick to point this out about Rose Lake near Vergas: It can be a challenge to fish.

A big chunk of this 1,200-acre lake features extremely deep water, maxing out at 137 feet deep at its center. Rose also is a very clear lake, annually featuring 8- to 14-foot water clarity. These attributes tip the odds in favor of the fish that inhabit it.

It’s also likely why the lake doesn’t receive a whole lot of fishing pressure. There’s some seasonal action, mainly during the open-water season for panfish, bass, and walleyes, but virtually no winter pressure because its depth and wind-swept nature rarely allow good ice to form.

“It’s one of those lakes in the Vergas area that people know about but they don’t really talk about,” said Howard Fullhart, DNR assistant fisheries supervisor in Fergus Falls. “Rose is a panfish/bass lake with deep, clear water that’s not overly fished.”

There are some decent bulrush and cattail stands in shallow water that provide good spawning habitat for Rose Lake’s bluegills, crappies, and bass.

This helps maintain stable populations of each, with 7- to 8-inch bluegills most common. Crappies are less numerous and most are between 9 and 11 inches, although fish up to 14 inches were sampled by the DNR in 2019. The lake’s bass are somewhat abundant with a respectable average size.

According to Zach Rogers, of Little Chief Outpost in Fergus Falls, catching any great numbers of panfish and bass from Rose is most likely in the spring or early summer when these fish utilize the shallow cattails and bulrush areas to feed and then spawn.

“It’s definitely a seasonal bite, mainly in the spring when they’re up shallow,” Rogers said. “After that, in the middle of summer, they head deep and roam and it’s like chasing a ghost.”

The lake’s largemouth bass population is stable, and bass reproduction is consistently good. During the 2019 survey, bass approaching 18 inches were sampled. They averaged just more than 13 inches.

Catching numbers of them, especially the bigger bass, will likely happen early in the open-water season. By the time midsummer rolls around, they get difficult to find.

“Bass are a weird program out there. They tend to hang deep most of the year,” Rogers said. “Rose has good weeds out to 20 feet or more, so it fishes different than most lakes for bass.”

From a timing standpoint, catching walleyes tends to be the exact opposite on Rose. Because it’s so deep, the lake warms later in the season and therefore tends to produce better walleye action in the summer rather than the first few weeks of the season.

Rose’s walleye population is maintained through stocking, which is limited to carry-over fish (those in rearing ponds that dodged winterkill) stocked during even-numbered years. It usually includes fingerlings, yearlings, or adult walleyes – bigger fish that have a better chance of surviving than do walleye fry. Rose has a robust northern pike population that would pretty much eat up stocked walleye fry.

Putting limits of walleyes in the boat is tough, but the walleyes you do catch tend to run nice, usually in the 20-inch-or-larger class.

“Rose is a good example of a lake that it’s OK to keep bigger walleyes on,” Fullhart said. “There is little to no natural reproduction, so if you catch a 22-inch walleye, you won’t hurt the population by keeping it.”

Rogers added that Rose is an underrated walleye fishery. He works it deep for walleyes – 25 to 40 feet during the summer – and he’s caught some really nice walleyes from Rose.

“It is tough to fish because they’re usually deep, but if you catch it on the right day, you can do OK,” he said.