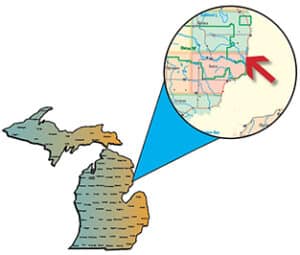 Natural reproduction supplemented by an aggressive stocking program has resulted in a self-sustaining walleye population in Iosco County’s Van Etten Lake. But it’s not just walleyes that lure anglers to this 1,320-acre body of water. Van Etten also has a robust panfish population with some good-sized crappies and a lot of yellow perch, although many are undersized. The lake also offers good northern pike and channel catfish fishing and fair action for smallmouth and largemouth bass.

Van Etten Lake is located in northeast Iosco County between Lake Huron and Wurtsmith Air Force Base, two miles north of Oscoda. The Pine River flows into the lake at the northwest end and Van Etten Creek flows out to the south and dumps into the Au Sable River about two miles upstream of Lake Huron. Dry Lake Creek and Phelan Creek also flow into Van Etten.

Van Etten is a long, relatively narrow lake with several points and bays, and two islands at the north end including the largest of the two, Loud Island. The shoreline is mostly developed with private homes, except for a state forest campground and boat launch on the west shore. The ramp is gravel and parking is limited to six vehicles.

Sadly, the Michigan Department of Community Health, lists several fish consumption advisories for catfish, suckers, and walleyes in Van Etten Lake related to PCB’s, PFOS, and mercury. Some of these chemicals have entered Van Etten Lake through groundwater leaching from the nearby military base and airfield. Details can be found in the MDCH Fish Consumption Guide.

In the most recent survey of the fishery in Van Etten Lake the DNR collected 1,573 fish covering 20 species.

Yellow perch was the most abundant species. They ranged up to 13 inches but most were 6 inches or less. The survey also produced good numbers of pumpkinseed sunfish to 8 inches, and rock bass to 10.

Fair numbers of black crappies were captured. They ranged between 7.7 and 12.6 and were growing 1.5 inches above the state average. Only 14 bluegills were found in the survey, but they ranged up to 8.6 inches.

The main predators in Van Etten Lake are northern pike, walleyes, channel catfish and light numbers of largemouth and smallmouth bass. The northerns ranged up to 39 inches and more than half were legal size of 24 inches or better. Walleyes ranged between 10.6 and 25.8 with the majority of them 19 inches or larger. Cats ranged up to 30 inches, largemouths up to 17, and smallies to 20.

When officials open the dam on Van Etten Creek, especially in preparation for winter draw-down, fish come up into the lake from Lake Huron including brown trout, steelhead, and salmon.

“Walleye stocking was discontinued at Van Etten Lake following the 2018 stocking event,” Cwalinski wrote. “Wild walleye are abundant enough in the lake as evidenced by the number of adult fish caught over the years from non-stocking years. In addition, fall juvenile assessments from the past have documented wild production in both stocked and non-stocked years.”

Walleye anglers do well drifting nightcrawlers and leeches through the trough between Loud Island and the east shoreline, the area locals refer to as “Walleye Alley.”

Another option is to troll crank baits and stick baits around the south end of the lake near the dam, along the breaks north of Phelan Creek, and straight across from the boat ramp along the west shore.

For crappies, look for suspended fish along the drop-offs at the end of the points. Pinkie jigs tipped with a minnow will usually produce, but you’ll have to sort through the fish for the bigger ones.

Bass are scattered throughout the lake, but aren’t targeted much by anglers. Tube jigs and spinnerbaits fished around the drops off Pierce Point can produce good smallmouth action.