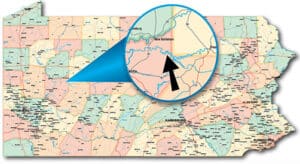 Remember how cool it was as a kid – or heck, even now – to eat a Blow Pop?

You had a hard candy lollipop, yes. But inside was a second, almost hidden treat, of bubble gum. It was a sweet tooth twofer.

It’s a U.S. Army Corps of Engineers lake in Armstrong County. Located just southeast of Distance, it covers about 279 acres at its normal summer pool.

It doesn’t always get lots of pressure.

Mahoning Creek Lake is long, narrow and winding. It flows between steep hillsides, all of which are heavily wooded. That limits shore access.

Boats, meanwhile, can get on at either of two access points, but are limited to no more than 10 horsepower. That, too, keeps some anglers away, namely those who can or like to roar around and fish lots of water.

But it offers pretty good fishing for two species in particular. One you might expect to be thriving there. The presence of the other is, if not shocking, at least a bit remarkable.

The Pennsylvania Fish & Boat Commission began stocking Mahoning Creek Lake with channel catfish fingerlings way back in the 1970s. The idea was to create a “targeted fishery,” or a place where the channel catfishing would be good enough that anglers would go specifically to fish for them.

That effort continues. The commission puts at least 3,500 catfish in the lake each year, and often in recent years – thanks to hatchery success – has exceeded that by a considerable margin.

And the results are good.

Commission biologists surveyed the lake in 2018, for example, to assess how all those catfish stocked are doing. What they found was twice as many catfish as needed to rank the lake as having a “high-quality fishery.”

“Good numbers of both younger and especially larger size adults were documented with multiple year classes represented,” wrote fisheries biologist Brian Ensign in a report on the survey.

Those “larger” sized fish included some real trophies. Fifty-nine percent of all the channel cats measured exceeded 20 inches in length, “with the largest fish measuring 30 inches and weighing 13 pounds,” he added.

The best news, perhaps, is that stocking is not alone responsible for that fishery. It appears there’s been some natural reproduction occurring over the years as well.

The lake’s channel cats seem to be taking advantage of them, too.

“In fact, we found multiple age classes of channel catfish that were produced in years where no stocking occurred,” Ensign said.

That doesn’t mean the commission plans to stop stocking channel cats. It continues to release fish and will until further study – surveys targeting young-of-the-year fish — reveals the need not to, Ensign said.

In the meantime, anglers can expect some pretty good channel cat action at Mahoning Creek Lake.

Now, as for the unexpected.

There’s another species of fish that’s doing pretty well at Mahoning Creek Lake. It, too, may have gotten its start there via stocking.

But like the channel catfish, it might be thriving these days at least partly on its own.

The commission stocked tiger muskies for years in the lake, trying to build another targeted fishery. Carried out from the 1970s through 2017, that never worked. Tigers never took hold and remain all but absent from the lake today.

But, Ensign said, the commission twice – in 2005 and 2008 – also planted purebred muskies in Mahoning Creek Lake. And that comparatively small planting is producing fish.

A 2010 survey of the lake turned up four purebred muskies that were about 4 to 5 years old. The 2018 survey found eight more.

Some of those purebreds likely originated as stocked fish, he said. But another possibility – admittedly unproven though still possible – is that the muskies are now naturally reproducing on their own, he added.

Regardless, the commission is doing what it can to support those fish. It’s stocking purebred muskie fingerlings, fish 12 to 14 inches long, in the lake on alternate years.

Biologists plan to keep an eye on the lake and capture young-of-the-year muskies to tell whether those that show up in nets are stocked fish or ones bred there.

But either way, the fishing is pretty good and figures to get better as the fish age. Back in 2018, the largest biologists saw was 39 inches. But surely there are some now over the 40-inch mark.

As for other fish in Mahoning Creek Lake, it’s pretty well known for its northern pike. Catching one is not necessarily an everyday occurrence, but those anglers do get into tend to be nice. Ensign said 60 percent or so of the pike handled in the commission’s last survey were longer than 24 inches, the legal minimum for harvest.

Largemouth bass and, to a lesser extent, smallmouth bass also inhabit the lake, with some trophy fish available.

The lake also traditionally holds lots of black and white crappies. Sometimes catching those fish is more of a numbers game than anything else, as fish longer than 10 inches seem to get cropped from the population pretty quickly.

But they are abundant.

Mahoning Creek Lake is also home to lots of bullhead catfish, yellow and most especially brown. They do reach nice sizes.

Ensign said in his most recent report that more than seven out of every 10 brown bullheads, for example, was 12 inches or longer, a good size for taking home for the table.

If there’s one last reason to visit Mahoning Creek Lake, it’s to introduce a newcomer to fishing. The Army Corps maintains a fishing access at what’s known as the Outflow Area. People new to fishing can try casting a line there using loaner tackle available for free from the corps office near the dam.

What you should know: The Army Corps maintains a fishing access at what’s known as the Outflow Area.

The Fish & Boat Commission puts at least 3,500 catfish in the lake each year.

The agency stocks purebred muskie fingerlings, 12 to 14 inches long, in the lake on alternate years.

Boats are limited to no more than 10 horsepower; no swimming is allowed in the lake.