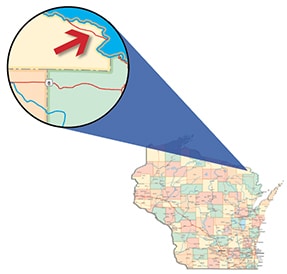 As legend goes, the Spread Eagle Chain of Lakes originally received its name because some believed the connected waters resembled an eagle with its wings spread. The name appears to go as far back as 1857 when surveyor Artimus Curtis set the township lines.

Others say the name could be connected to Hiram Fisher’s iron ore discovery at Florence that he named the Spread Eagle Mine.

In any event, local anglers know the Spread Eagle Chain as a good spot for catching a variety of panfish and game fish species in at least eight lakes, although some literature reference nine lakes. The most commonly known lakes are North, West, Middle, Bass, Long, East, South, and Railroad.

The local DNR fish team ran a mark-recapture survey to estimate adult walleye abundance in the spring of 2018. The crew handled 116 different walleyes (79 adults) during fyke net and electrofishing surveys. The estimate of adult walleyes came in at about 0.29 fish per acre, which isn’t too far off the 2011 estimate of 0.36 adults per acre.

“While the adult population has decreased slightly since 2011, it has actually made significant progress toward becoming a much more sustainable population,” wrote Greg Matzke, Florence County DNR fish biologist, in a report from that survey.

“The population in 2011 consisted of old and large adults. The majority of those fish have aged out of the population and the current population consists of younger, smaller fish, suggesting that recent changes to the walleye stocking program have been effective. While the adult density is still at a very low level there are many juvenile fish in the population. As those fish mature and future stocking provides more year classes, the population should continue to rise,” wrote Matzke.

It takes two years to run a muskie population estimate because the big esox is notoriously net-shy and will avoid fyke nets after their intial capture of that year. So, crews return the following year to capture fish that have “forgotten” they were in a net the previous spring.

The 2018 effort was the first year of that two-year process on Spread Eagle. The crew captured 34 different muskies (31 adults), each marked with a fin clip and internal tag. Of those adult fish, 45.2% were longer than 40 inches; 9.7% were longer than 45 inches. The largest went 46.5 inches.

“Muskies were introduced to the chain in 2002, so the population has not reached its potential for size structure yet. With that considered, the size structure is pretty good, with a high percentage of fish (longer than) 40 inches,” said Matzke.

Bass don’t “capture” well during surveys aimed at walleyes because the water temperatures are still too cold to draw bass to the shoreline where fyke nets await. However, the crews often catch bass during the evening electro-fishing runs. The crew actually did well on largemouths, catching 1,013 adults longer than 8 inches that were then fin-clipped. During a later recapture survey, 476 adult largemouths were captured, with 136 bearing the fin clip.

With that information, the crew estimated the adult largemouth population to be about 3,688 fish, or 6.7 adults per acre. That’s considered overabundant, but is down from the 2011 estimate of 7.4 adults per acre. Only 19.5% of the bass captured were longer than 14 inches and only 0.8% were longer than 18 inches. Because of that poorer size structure, since 2016 the chain has had no largemouth minimum size limit and a bag limit is five fish per person. Fish between 14 and 18 inches may not be kept and only one fish longer than 18 inches may be kept per day.

The chain has smallmouths, but the population estimate came in at 0.6 adults per acre. Only 5.3% of those fish were 17 inches or longer. The biggest fish went 19 inches.

Perch and crappies show decent abundance, with crappies showing better numbers than in the 2011 survey. The perch size structure was very good with 55.6% and 18.5% of the fish being longer than 8 and 10 inches, respectively. Crappie size was slightly below the area average.

Bluegills are the most abundant panfish, with a relative abundance of 46.3 fish per net-lift, while pumpkinseed were the third most abundant species behind rock bass.