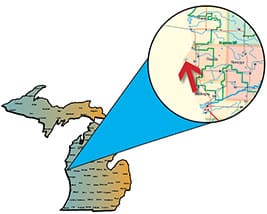 “The fish community of Au Sable Lake is typical for a northern Michigan natural lake,” wrote DNR senior fisheries biologist Tim Cwalinski in a report following the most recent survey of the lake.

The DNR has been stocking walleyes in Au Sable Lake for 30 years, but returns have been dismal and biologists who manage the lake want to discontinue that practice.

Located in northeastern Ogemaw County, Au Sable Lake covers 271 acres and rests about 5 miles east of Lupton. The shoreline is mostly developed with year-around homes and summer cottages. Boating traffic gets fairly heavy on warm, sunny weekends, but during the middle of the week anglers have the lake pretty much to themselves.

Au Sable Lake has an irregular shoreline with several points and bays. It features two primary basins separated by a shallow marl shoal.

The main structure in the lake is its steep and varied drop-offs. Some drop down as far as 20 feet right off the shore, while a mid-lake drop dip down to 52 feet.  The lake also has abundant vegetation in the form of chara, water milfoil, curly leaf potamogeton, reeds and lily pads.

The bottom of Au Sable Lake  is comprised of marl and sand.

Anglers with smaller boats can make the trek up to Little Au Sable Lake, but might have a slight portage on the channel.

The stocking history on Au Sable Lake is as deep as its waters. The Department of Conservation began stocking game fish in the lake in the 1930s. Over the years, bluegill, sunfish, yellow perch, smallmouth and largemouth bass, northern pike, and walleye have all been stocked.

Pike plants were the focus in the 1980s and early ‘90s when fisheries managers dumped over 60,000 northern into the lake, which now supports a thriving northern pike fishery.

Since 1992, only walleyes have been stocked in the lake including more than 150,000 spring fingerlings over the past eight years. However, because of poor recruitment, biologists who manage the lake are asking for that practice to end.

“Walleye stocking should be discontinued at Au Sable Lake,” Cwalinski wrote. “Reports of walleye catches from anglers are non-existent, while survey catches infrequently catch acceptable numbers of fish. It is likely that fingerling walleye, when stocked, are preyed on by all species, even panfish. Thus, adult numbers never attain levels that: a) produce a consistent fishery, and b) are sufficient in reducing panfish abundance and increasing panfish growth rates. This has been a 30-year stocking program that has had little tangible results.”

Although there are a lot of undersized panfish in the lake, Au Sable does produce a few fish or trophy proportions. Since 2016, five Master Angler panfish have been caught in Au Sable Lake including a 14.25-inch crappie, an 11.3 inch rock bass, two pumpkinseed sunfish over 9 inches each, and a 10.5 inch bluegill.

Bluegill was the most abundant game fish collected in the survey. They ranged up to 10.5 inches, but most were in the 5- to 6-inch range.

“Bluegill were considered prolific but few fish larger than 8-inches were present,” Cwalinski wrote. “Bluegill lived up to age-9 in Au Sable Lake, but few fish were reaching these older ages and bluegill continued to demonstrate slow growth. Pumpkinseed were collected in lesser numbers but exhibited good growth with most fish 7-inches or larger.”

There also were good numbers of largemouth bass to 19 inches and rock bass to 11.

“Largemouth bass were the most prolific predator, with most fish 10 to 14 inches,” Cwalinski wrote. “Bass demonstrated good growth and were represented by a minimum of eight age-classes.”

The survey also found fair numbers of rock bass to 11 inches, northern pike to 29, yellow perch to 5.8, pumpkinseed sunfish to 9.1 and black crappies to 14.1.

“The black crappie population is relatively new to the fish community and offers up the potential for quality catches,” Cwalinski wrote.

The lone public access site is located on the southeast shore of the lake off Sumac Trail. It features a hard-surfaced ramp and parking for about six vehicles.

Time for a tuneup? Tip-ups need attention, too

The youngster slowly pulled on the line to feel for any tension or resistance. Then he shook his head in