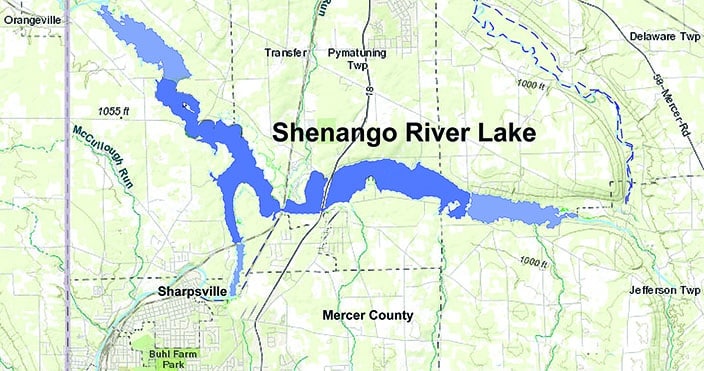 Shenango River Lake is not what you’d call a hidden gem.

It’s way too big and its audience way too varied for that.

Located north of Sharpsville in Mercer County in northwestern Pennsylvania, the U.S. Army Corps of Engineers lake covers a hair more than 3,500 acres at normal pool. That’s about one-fifth the size of its neighbor to the north – Pymatuning Lake – but still sizeable.

And lots of people visit. In addition to offering camping – Shenango’s campground includes more than 350 sites – it boasts hiking trails, some of them with historic ties to the old canal that once existed here. There are areas managed for hunting and day-use sites for picnickers. ATV riders frequent this area, too, flocking to its Bayview off-road vehicle area.

Then there are the boaters.

Shenango has no horsepower limit, and unlike many other Corps lakes, no boat launch fees, so plenty of people descend on this lake on nice summer weekends to water ski, tube and ride personal watercraft.

For all that attention, and sometimes because of it, the lake is sometimes, at least, overlooked as a fishery. That’s too bad. Shenango River Lake actually holds lots of fish of lots of kinds for those willing and able to cast a line into its waters.

One highlight is its crappies. They are probably the most sought-after species in the lake.

It’s no wonder why.

Black crappies predominate, though you can catch the occasional white one, too. Taken together, they are, as a general rule, superabundant in Shenango.

If there’s been one complaint, it’s that all that angler pressure and harvest was limiting their size.

Looking at the situation a few years ago, big fish showed up on occasion. Fifteen inchers were not unheard of.

But most topped out at about 10 inches. Any bigger and they ended up in someone’s boat.

Starting in 2018, the Pennsylvania Fish & Boat Commission put Shenango in the panfish enhancement program. That limits anglers to keeping 20 crappies per day, all of which must be at least 9 inches long.

Previously, there was no size limit and the creel limit was 50.

The regulation change seems to be having some effect. Reports from the lake this year indicate fish in the 10- to 12-inch category are plentiful.

Then there are the larger predatory fish in Shenango. They offer some really good fishing, too.

For starters, there’s its bass. As with crappies, this is a twofer – Shenango holds both largemouths and smallmouths. The former are most common. They’re generally bigger, too.

But the lake’s bass fishery is remarkably consistent. Fish & Boat Commission biologists survey the lake’s bass population periodically. The most recent look occurred in 2017, though other efforts date as far back as 1990.

Bass numbers have been steady over time, and the number of bass longer than 12 inches and longer than 15 inches – the commission’s benchmarks – continue to be “very good,” according to agency reports.

Catfish are another highlight – and as with the crappies and bass, there are two kinds of them, as well.

Shenango River Lake is home to a naturally-reproducing channel catfish population. It’s a healthy one, too – among gamefish, biologists get more channel cats in their trap nets than anything but crappies.

But this isn’t just about numbers; it’s size, too. Channel cats in the 28-inch range are not uncommon at Shenango.

Then there are the flatheads.

Flathead catfish are not native to the lake, nor has the commission ever put any in there. But someone did somewhere along the line and the population seems to be growing, with big fish turning up.

A fourth twofer the lake offers is its white and hybrid striped bass, the latter a hatchery mix of whites and purebred stripers.

White bass are native to the lake and reproduce on their own. As a result, their numbers can go up and down a bit on occasion. But they’re a pretty consistent factor in the lake’s fishery, with anglers finding them near shore and moving up and down the river that feeds the lake when they spawn.

The commission stocks hybrid stripers in the lake and has done so pretty much every year since 2007. Hybrids are great fun: they grow fast, reaching 24 to 28 inches and more; fight hard, going on powerful runs; and hit everything from live baits (kids targeting channel cats even get them on chicken livers at times) to minnow-shaped crankbaits and other artificials.

Just make sure you can tell the two fish apart. White bass are managed as panfish, with no minimum size and a 50-fish-per-day creel limit, while the rules say stripers must be at least 20 inches long to keep, with a two-fish daily limit.

One easy way to differentiate them is to look at their tongues. White bass have one tooth patch, while hybrid stripers have two.

Beyond all that, Shenango River Lake holds lots of northern pike, with some pushing 40 inches. There are a few muskies in the lake as well, though they’re rare enough that few target them specifically.

Efforts to establish a walleye fishery in the lake via stocking have been hit and miss over time. As a result, there are some fish to be caught – including some very nice ones, pushing 25 inches or more – but they’re hard to bank on, too.

But with everything else swimming in Shenango River Lake, it’s hard to be too disappointed.

What you should know: Campground includes more than 350 sites

Biologists have caught flatheads 42 inches and longer in nets, and anglers report catching fish even bigger