Cedar Hedge Lake is easy to overlook as nearby and larger Long Lake and Lake Dubonnet usually get the nod from most anglers. But for those looking for a side trip during a day of angling consider a stop at Cedar Hedge. 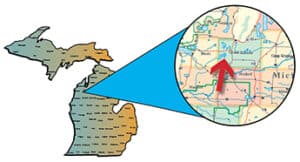 “It’s a good largemouth bass and northern pike lake,” says David A. Rose owner of WildFishing Guide Service in nearby Grawn. “It’s a very deep lake and there are also some herring (cisco) in there, along with some bluegills and crappies, but it’s mostly a bass and pike lake.”

Surprisingly, of Michigan’s 11,000 inland lakes, only about 200 of them are known to support cisco, which makes Cedar Hedge a bit of an anomaly.

Cedar Hedge is an oblong lake with an irregular shoreline and one island. According to a DNR report following a 2017 survey of the fishery in the lake, multiple small inlets and seeps flow into Cedar Hedge, including one that connects to Round Lake. There is also one larger outlet that flows south out of the lake and connects Cedar Hedge to Tullers Lake, then Bridge Lake, and finally Green Lake, making Cedar Hedge Lake part of the Betsie River watershed.

The bottom of Cedar Lake is composed mostly of sand and marl, with some muck areas around the northeast shoreline, around the island, and in the deepest basin.

The lake bottoms out in about 70 feet of water in a hole north of the DNR boat launch on the southwest side. The majority of the lake, however, is 10 feet deep or less.

“Angler reports from Cedar Hedge Lake are generally positive. This is a popular lake to ice fish during the winter months, particularly for anglers who like to target bluegill, cisco, crappie and yellow perch,” DNR fisheries biologist Heather Hettinger wrote in the report. “Summer months see a lot of bass angling effort, along with the panfish fishery.

“Property owners and anglers who made contact with the survey crew during this effort were happy with the quality of the fishery here but did note that Cedar Hedge Lake seems to be becoming more heavily used than in the past.”

Management efforts on Cedar Hedge have been documented as far back as 1910 when the Michigan Department of Conservation – the precursor to the DNR – first stocked the lake with walleye and smallmouth bass fry. There are no records of any more stocking until between 1940 and 1944 when a combination of panfish, black bass and lake trout were stocked. No other fish have been stocked in Cedar Hedge Lake since, except for a one-time plant of brook trout in 1964.

The DNR established an access site on Cedar Hedge in 1967, located on the south end of the lake off Gonder Road.

The first survey of the fishery in Cedar Hedge was conducted in May of ’67. The survey crew reported a “well balanced population for this type of lake.” At that time Cedar Hedge was full of bluegills, rock bass, cisco, largemouth bass, northern pike, bullhead, pumpkinseed sunfish, yellow perch, longnose gar, white suckers and bowfin.

The composition of game fish hasn’t changed much since then.

In the 2017 survey, a total of 1,391 fish were collected representing 24 different species.

Bluegill was the most abundant species with fish ranging up to 9 inches. The survey also found good numbers of largemouth bass between 1 and 19 inches, rock bass between 1 and 10 inches and yellow perch between 2 and 8 inches, although most of the yellow bellies were on the small side.

The DNR survey produced decent numbers of northern pike between 14 and 34 inches and pumpkinseed sunfish, although none were over 3 inches in length.

Light numbers of black crappies to 10 inches and smallmouth bass to 17 were also captured in the survey, along with one 27-inch walleye, which biologists speculate was released into the lake by an angler.

“In the past anglers have expressed a desire to have walleye in Cedar Hedge Lake,” Hettinger wrote. “However, given the close proximity to Long Lake, which has a robust walleye fishery, and the presence of cisco in this lake, Cedar Hedge would not be a suitable candidate for walleye stockings.”

Cisco are currently listed as a threatened species in Michigan.

Fish that were caught in the 2017 survey that had not been collected in prior surveys included Iowa darter, banded killifish, common shiner, brook silverside, bluntnose minnow, black crappie, green sunfish and longear sunfish.

Rose suggests that anglers targeting largemouth bass and northern pike work their way around the shoreline and the shore of the island while casting spinnerbaits and crankbaits.