Reliable Lida lakes offer both walleyes and crappies in OTC 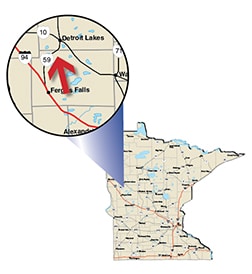 Connected by a navigable channel, North and South Lida lakes in Otter Tail County offer a wide range of fish species for anglers to target. For that reason alone, they are two of the more popular lakes in the Pelican Rapids area.

While both lakes support walleyes, panfish, bass, and northern pike, there are some differences between the two Lidas. Knowing what to look for and expect from each lake will tip the odds in your favor when fishing them.

The walleye populations of both Lidas have been maintained through natural reproduction for decades. The lakes hadn’t been stocked since the 1980s – until last year.

A DNR survey conducted in 2018 showed walleye numbers took a recent nosedive in North Lida, dropping from an average of 15 walleyes per gill net in 2012 to 3.5 per lift in 2018. Catch rates also dipped in South Lida, down to 7 walleyes per net, but the decline was not as dramatic as it was for North Lida.

As a result, both lakes were stocked with walleye fry last spring, and an additional 1,2000 pounds of walleye fingerlings were stocked in North Lida last fall.

“We’ve seen a drop in catch rates on North Lida the last six years, and it’s been a concern. While we sampled eight different year-classes, the overall numbers of walleyes weren’t there,” said Jim Wolters, DNR area fisheries supervisor in Fergus Falls. “Catch rates were down a little on South Lida, (and) we seem to be missing year-classes. That’s what we’ve been hearing from anglers, too.”

Walleyes from 17 to 26 inches are required to be released by anglers on both lakes. This regulation was implemented in 2005 in order to protect prime spawning fish. It’s worth noting that quality spawning habitat exists in the lakes.

The survey results suggest anglers should adjust their expectations regarding walleye catch on both lake.

“South Lida currently tends to have larger fish – 86% of the walleyes sampled in 2018 were within the protected slot,” Wolters said. “We see very few walleyes over 25 inches from North Lida, and more under 17 inches, so they’re two different types of (walleye) fisheries in that respect.”

While largemouth and smallmouth bass are present in both lakes, the species differ in numbers in each. You’ll find more vegetation in South Lida, making it a much better largemouth bass fishery. North Lida features more rock, which is why smallmouth bass thrive in it.

“It’s pretty well-known around here that North Lida is the better walleye and smallmouth bass lake (because) it has the right stuff – rocks and gravel – just ideal structure,” said Nick Adamczyk, of Gene’s Sport Shop in Perham. “South Lida has more of that shallow and deep vegetation, along with reed islands, so it produces more largemouths.”

Panfish get quite a bit of angling pressure on both lakes, although crappies seem to be the main attraction. These lakes are the only ones in the state that have an 11-inch minimum  size limit in place to keep crappies robust. It was implemented in 1997, has the support of local anglers, and seems to be working.

The 2018 survey revealed consistent crappie year-classes in the system, and 67% of the crappies sampled were 11 inches or longer.

“Anglers seem fine with the regulation and they’re catching plenty of crappies over 11 inches,” Wolters said. “They’re both very good crappie lakes, and you will catch quality bluegills from both.”

On the northern pike front, South Lida tends to mostly produce small fish, but North Lida does kick out a few bigger pike. Adamczyk said pike aren’t targeted much on either lake.