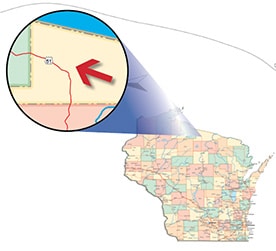 Vilas County has more lakes than any other county in Wisconsin with 563 named and 755 unnamed lakes that cover 93,889 acres. That’s a lot of water. With that many lakes, what’s the chances that most anglers, if asked to name a well known Vilas County lake, would come up with the same name on the first try?

My money would be on Trout Lake being the best known lake in Vilas County.

And why not? It’s a huge lake with clear water and an unending maze of structure supporting an oily forage base (ciscoes and whitefish) that help walleyes, muskies, and – what? – lake trout grow to trophy sizes and shapes.

Eric Wegleitner, out of the Woodruff office, is the new DNR fish biologist for Vilas County. Wegleitner has been on the job in Vilas County for nine months now, and has quickly familiarized himself with one of his county’s most popular lakes.

The local fish crew is in the midst of working up a comprehensive survey on Trout Lake. That means anglers who visit Trout this winter may be approached by a creel clerk who will interview them about their fishing success.

While winter fishermen do key on Trout’s walleyes, believe or not there is a growing interest in the lake’s whitefish and ciscoes that they jig up over deep water. Trout Lake also has a unique seining season for whitefish and ciscoes that has become mildly popular. It runs from the Saturday nearest Oct. 10 to Feb. 1. On Trout Lake, there is a 10-fish daily bag limit (in aggregate). That’s somewhat different than other cisco waters where the limit is a little unusual in that it’s described as “25 pounds, plus one fish.”

Open-water anglers may fancy Trout Lake’s unique lake trout fishery. Lakers must be longer than 30 inches and the daily bag limit is one fish. The lake trout season opens at 5 a.m. the first Saturday in May (May 2 this year) and runs through Sept. 30.

The DNR surveys lakers out there in the fall and winter. The crew did a population estimate in 2018-19 that came in at .5 adult fish per acre.

“That lake trout fishery is unique. There aren’t too many inland lakes in Wisconsin that produce a lake trout population like that,” said Wegleitner.

Most recently, the crew saw fish up to 30 inches, with quite a few lakers running 25 to 29 inches. Anglers will notice what’s called FLOY tags in their dorsal fins. The DNR has been tagging Trout Lake lakers since the 1970s to help in monitoring the population.

“We ask that anglers return those tags if they keep the fish. If releasing the fish, record the tag number and color, and fish length, and return to the DNR (at the Woodruff office),” said Wegleitner. “We can provide anglers with information about that fish. The tags should be pretty noticeable.”

He said those lake trout are slow-growing fish with the population bolstered by stocking. They have estimates of lakers out there being more than 40 years old. The DNR stocked about 14,000 fish in 2019. They are raised at the DNR fish hatchery in Bayfield from genetic material gathered at Trout Lake. Extra Trout Lake lakers are “stored” in nearby White Sand Lake in the event the Trout Lake population ever crashes.

Once anglers get past Trout Lake’s whitefish, ciscoes, and lake trout, they’re left with nothing but walleyes, muskies, both bass species, and northern pike. Trout does have panfish, but because of the lake’s game fish trophy potential, Trout is not known as a panfish destination, said Wegleitner.

The most recent survey shows that walleye numbers and size remains fairly steady  at about 2.4 adults per acre, with fish up to 30 inches and even beyond.

“Looking at the last 20 years or so, we’re averaging about 2.5 adults per acre. It does get stocked with small fingerlings on an odd-year rotation. We haven’t seen much for natural reproduction – about three young-of-the-year per mile of shoreline in the last fall survey,” said Wegleitner. “It’s stocked at 25 fish per acre, so a little lower than other lakes because of its sheer size. It’s still producing a good walleye fishery.”

Multiple muskie estimates over the last four years shows a decline. Wegleitner said the DNR’s treaty unit is developing a muskie management plan to address that issue. The last estimate came in at just 44 fish for the whole lake.

“That’s not ideal. There is a lot of work going on out there on muskies,” he said.

Muskies are being stocked out there every other year. The crew handled 21 fish in the last survey and 24% were 40 inches or longer. The biggest taped out at 45.4 inches.