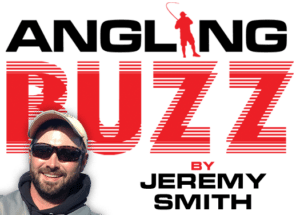 One of the oldest lures in most angler’s tackle boxes gets overlooked this time of year. It might surprise some readers that this lure is Rapala’s Jigging Rap, which hit the market in the 1960s, and developed into one of the most popular ice-fishing lures of all time.

But today I’m talking about late summer and early fall situations where the Jigging Rap is a great option for walleyes, but also a deadly option for crappies, lake trout, and smallmouth bass. While this lure has earned a spot in every ice  walleye pro’s box, I think too many folks whom I meet at boat ramps across the Midwest ignore this option for fall.

For soft-water walleyes, I most often use the No. 7 size that weighs 5/8 ounce. I cast it in most situations, and its weight enables you to chuck it out across deeper flats or humps, so you can cover a lot of water. The Jigging Rap is at its best over bottoms of sand, gravel, and mud, or transitions between them. It tends to hang up in bigger chunk rock, as well as brush or vegetation.

The retrieve is critical for success. Leave the bail open on the cast until it touches bottom. Then quickly flip the bail with your finger and raise the rod to make the lure rise about two feet off bottom; then repeat that cadence back to the boat.

Most bites come as it falls back to the bottom, so you feel a fish when you start to snap it again. The rod also is important. Use one rated extra-fast action that’s of medium power and from 6 feet, 8 inches to 7-foot. Match it with a 2500-size spinning reel with 6-pound mono. Mono works well since it has some stretch, so you can set the hook at a good distance.

During fall, you often find crappies suspended off bottom in 15 to 40 feet of water. This lure works well for them, too, generally in a No. 5 or 3 size. Watch your sonar to identify pods of fish and drop on them vertically. It performs for fishing lake trout vertically in fall and winter as well. One advantage of vertical fishing is that the lure glides out to the side when you give it a short snap, then it turns and glides back. This action is similar to a jerkbait so you can catch smallmouth in deeper water, too.

You probably have a few of these lures stashed in your ice-fishing box, so consider working long before the lakes freeze this winter. I promise, it’s a hidden jewel, so don’t wait to put this class lure through the soft-water paces.