Tom Spence was looking for moose. He found something much bigger.

An experience of a lifetime.

Spence, an amateur photographer from Tofte, spent this past weekend as he often does – cruising the backroads near Tofte, on the North Shore of Lake Superior in northeastern Minnesota, looking for wildlife photo opportunities.

“This trip, I was hoping to find some moose as I had been seeing tracks lately,” said Spence, 44, who makes a living as a carpenter in the Tofte area. 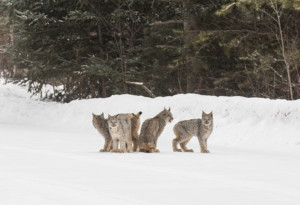 These days, even in northeastern Minnesota, moose sightings are something to behold. But thoughts of moose were quickly forgotten on this day.

A rare sighting of a family of Canada lynx interacting in the wild will do that.

Spence said he was in his truck on a backcountry road when the first lynx appeared on the roadway about 50 yards away. He said the lone cat saw him, but didn’t seem to mind. Then, one after another, the cats kept coming, five in all – the mother, followed by four kittens, Spence figured, adding that one was as close as 25 yards or so away from him when it emerged and joined the group. 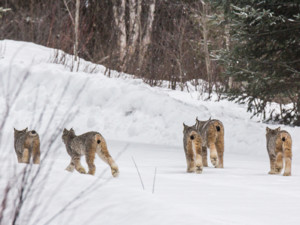 “I have been seeing lynx in the approximate area for the past two winters – always solo animals,” he said. “Last week I saw one solo cat about six or seven miles from where this group was.

“The four joined in the road and sniffed, snuggled, laid down, rubbed up against each other … it was incredible,” added Spence, who said his rare previous lynx sightings were mostly from long distance and always involved just one cat. “They all knew I was there and didn’t seem to mind. The fifth one came in as I was photographing the group of four. I was giggling as I took photos. I couldn’t believe it was happening. At one point, I put the camera down and just watched as they cuddled and all laid down at the feet of the mother.”