Home » Minnesota » Hunting » Whitetail warmup via squirrel: A solid start to the making of a hunter

Whitetail warmup via squirrel: A solid start to the making of a hunter

After two seasons of heading into the woods with a small-bore rifle, my 9-year-old son bagged his first animal as a small game hunter. He zeroed in on a squirrel and shot it from 20 yards, killing it on the spot.

He was very proud, and I was very proud, too, but I wondered how he would react when he approached it. I could see that it wasn’t kicking around but told him to approach it slowly and pay attention to its eyes.

Once we’d confirmed that it was dead, we exchanged a big hug and picked up the squirrel to clean it. We thanked the squirrel for giving its life and promised to put it to good use.

My son received a lesson in skinning an animal and removing the guts. He’s seen a deer being gutted before (two years ago thanks to my indecisiveness in 2016). This was definitely a different experience for him because it was his animal we were cleaning. 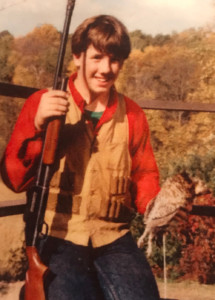 Just before the squirrel was shot, it had come down from an oak tree and my son had stalked it from across a clearing. This was right near my parent’s home in the Brainerd lakes area so my Dad was on hand for the cleaning. He showed me how to clean squirrels after my first kill 30 years ago, so this was a really special moment for our family.

We pointed out the different organs and my son had a thousand questions for us. After removing the major pieces of meat from the carcass, we put the remains in a wire basket behind the garage. My son’s science teacher should have a pretty cool skeleton to use next school year, if they want. Otherwise, my son will have the beginning of a skull collection.

We bagged the tail in some borax with plans to use it for making a few spinners and jigs once it’s thoroughly dried. My son is looking forward to putting this squirrel to use in the spring to catch panfish.

The meat spent a night marinating in the refrigerator and tasted great after being grilled the next day. It’s been a while since I’ve eaten squirrel, and while it’s not a taste I missed, it was definitely edible. My son liked it enough that he would like to get another one.

More than anything, I was most impressed with how my son handled the experience. He cared about making a clean shot and then putting the animal to good use. We talked a few times about how it feels to take a life, and he has a good understanding of the balance between feeling sad for taking a life, but satisfaction of a hunt well done.

Consistently shooting the 20-gauge is still something he’s working on, so a fall turkey hunt is probably not in the works, but we are definitely on pace for him to take to the woods this coming spring. If he takes to the shotgun, we might get in some waterfowling next fall and maybe even the special October youth deer hunt.

Introducing a child to hunting definitely has been a different experience than introducing a child to fishing. Hunting is a more intensive kind of activity for several obvious reasons, most of all being the intention of taking a life. Fish don’t look much like the stuffed animals kids have in their bedrooms, but squirrels do.

The making of a hunter is a very personal experience and one we shouldn’t force or rush. Time will determine whether or not I’ve started my son off on the best journey.

Safe firearms handling skills are important, too. This is something we spent the past two years developing and hard-wiring in the brains of both of my children. They are constantly monitoring where the muzzle is pointing and being aware of the area they are aiming, more than just the backstop.

During the last two years, both kids have gone through several cans of pellet gun ammo and I’ve been either right next to them or within eyesight of them for every shot. The rule in our house is that before you can bowhunt or firearms hunt, you must be able to safely and effectively handle the weapon and consistently hit the target.

My daughter still says she wants to hunt someday, but for now enjoys shooting a pellet gun and bow. She likes to fish but not with the same intensity as my son, so we’ll see what happens with her hunting future.

Either way, it’s been such a gift to spend time with my children in the outdoors and it’s something we all hope to do for decades to come.