I often say that while I love that my kids are heavily involved in sports, I also get upset that this participation takes up so much time. It just doesn’t leave much to time hunt, fish, or camp when there are tournaments and state league games and so on for just about all four seasons.

But on a recent Friday, I was able to take about one-third of Hunter’s varsity baseball team out on the water. After all, spring ball was done, there were no American Legion games that day, and football camp didn’t interlope.

I let them pick the lake and they decided on Okauchee because they had never been there (and had heard me talking about how good it could be in the spring). I gave in, but did warn them the fish were probably going to be deeper than they like fishing for them because summer patterns were starting.

Since we were getting up at 5 a.m. I decided to let the gang all sleep over. Other than Hunter and I, on the water were Jack Olin, 16, Justin Hendrickson, 16, and Trevor Ulesich, 16, who all live around the Slinger-Richfield area.

We motored through the no-wake area and the fellas were pretty fired up. I mean, they really were. I just kinda sat back and enjoyed the fact that for this brief moment I wasn’t just the chaperone or the dude that owned the boat. I almost felt like one of the “guys,” which made me feel a little younger than I really am.

But I did put on extra sunscreen to bring me back to the age of 45.

We slid into a shallow bay in the north end of the lake and things looked pretty good. Lots of baitfish, good clear water, and nice weeds.  The plan was to pitch plastics in the pockets of the weeds and try some topwater lures while the sun was still low.

My first two casts with a topwater resulted in two strikes. I swung and missed on them, but it was enough for most of my crew to immediately switch from plastics topwaters. I let them have the topwater fun, but it didn’t last long when I started catching fish on plastics. 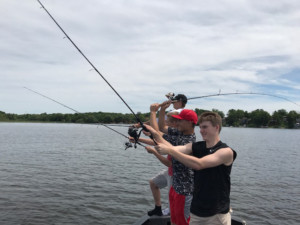 In a flurry, they all switched from topwaters back to the plastics. It felt like a fishing version of Follow the Leader and I’d be lying if I said I wasn’t eating it up. I mean, I can no longer, and may never have been able to, keep up with them in sports, but here – on a lake – I was a player-coach to be reckoned with.

As we drifted, the kids all got in the game. Ulesich popped a good one.  Then Olin, then Hunter, then Hendrickson. Some came on grubs, others wacky rigs, but the action was pretty constant.

We moved spots with everyone pretty tied up and tried another area – deeper – to try and catch some bigger fish. We did catch a few more, but the guys were having such good luck in the shallows that we went back to that type of water. It was then that Hunter caught on fire.

“This one is huge. Grab the net,” Hunter said.

The guys looked at each other with a smirk as Hunter can tend to turn every fish he lands into an ESPN moment (as if he were on camera). But this time he wasn’t hamming it up. A giant 20.5-incher was landed that had to weigh close to 5 pounds. Then Hendrickson nailed a 17-incher. Then another 17-incher for Hunter.

I could not believe all of the big fish that were still in about 5 feet of water.

The day ended with 34 bass caught. The guys thanked me with sincerity like they really did have a good time with the buzz-killer old man on board.

In reality, I should have been thanking them.