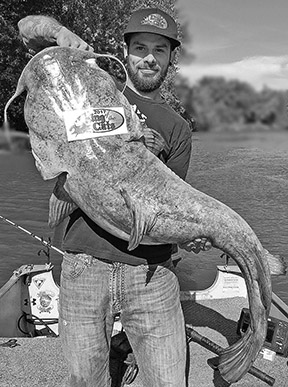 Shakopee, Minn. — For the second spring in a row, Jacob Robinson has landed a 49-inch flathead catfish on the Minnesota River on May 15.

The hefty fish, this one an inch thicker in girth (33½ inches) and likely heavier, tied last year’s fish in Minnesota DNR’s catch-and-release length record program, which was launched last year to highlight and celebrate big flatheads, muskies, and lake sturgeon that anglers catch and release.

“The head on that thing is like a buffalo,” said Mike Kurre, who curates Minnesota’s record fish program.

Robinson, who did not weigh the fish, said he thought both of the 49-inchers topped 65 pounds, at least. He was using 100-pound test fishing line.

What he did do was properly document the fish for the purposes of the record-release program. That meant taking a high-resolution photograph of the fish sitting on a bump board. The picture can be zoomed in on, verifying its length.

To best a record in the length-based program, a fish must be an eighth of an inch longer, Kurre said.

“You need a good photograph of the whole thing on a ruler and a witness,” said Kurre, noting that many submissions, including another flathead catfish that was caught the same day, have not met all of the requirements.

In fact, that particular fish, also a 49-inch flathead, was caught by a friend of Robinson’s, near Redwood Falls on the Minnesota River.

Robinson, who has been a dedicated flathead catfish angler for 11 years, said that mystery surrounds the catfish species.

“There is a group of us who fishes cats really hard,” he said. “You can tell – one day, it’s all big fish, then four days of just small fish biting. Then the next day, it’s all big ones again. It’s crazy. I don’t know what it is.”

In fact, it was catfish enthusiasts who successfully worked to change what was a continuous, year-round season on flatheads, to be only open April 1 to Nov. 30, to protect the fish when they stack up in winter holes and become vulnerable to snagging and potential overfishing.

Robinson said one can tell, looking at pictures of the two 49-inchers, that they are not the same fish. Prior to the record-release program, Robinson said, he’s caught larger flatheads, including a 49¾-incher.

He does think there are larger ones still out there.

“These 49s are healthy, and they are mean, you know,” he said. “Who knows (how big they are capable of growing), really?”

If a bigger one is caught, don’t be surprised if Robinson catches it, too. Or at the very least, one of his fishing buddies.

“The guys who are catching them, the big ones, we fish more than we work,” said Robinson, who said he literally fishes more hours per week than he works. It helps that he lives a mile from the river.