The Lake sturgeon is an ancient fish species that inhabits large river and lake systems in the Great Lakes Basin and elsewhere.

These monstrous fish can grow up to 7 feet long and weigh 200 pounds, providing Michigan hook-and-line anglers trying to catch them an extraordinary thrill.

They are the largest fish native to the Great Lakes, and because of habitat loss – mostly the loss of spawning habitat by the creation of dams – and overfishing in the past, the lake sturgeon is a threatened species in Michigan. Specific regulations limit sport fishing, and no commercial harvest is allowed.

Only at Black Lake in Cheboygan County can sport anglers use spears to harvest a sturgeon. There is a strict quota limiting total angler take and, individually, anglers can harvest only one sturgeon per season.

Across Michigan, fishing seasons for lake sturgeon can extend several months, depending on the water body, but the Black Lake season often lasts only a matter of hours.

This year’s season, which just recently concluded, was no exception.

The winter Black Lake sturgeon season opens the first Saturday in February and continues through the following Wednesday, or until the quota is reached, whichever comes first.

He was up at 3 a.m., getting the dozen of shanties he rents or loans to anglers ready to go. He then helps transport anglers out to the spearing grounds for the 8 a.m. season starting time.

“It’s bigger than it’s ever been,” said Archambo, who has been renting shanties to those who spear sturgeon virtually his entire life. “There’s more interest and enthusiasm than ever.”

“Last week, when it warmed up, there was no way you could get a shanty out there anywhere on the lake, and it didn’t 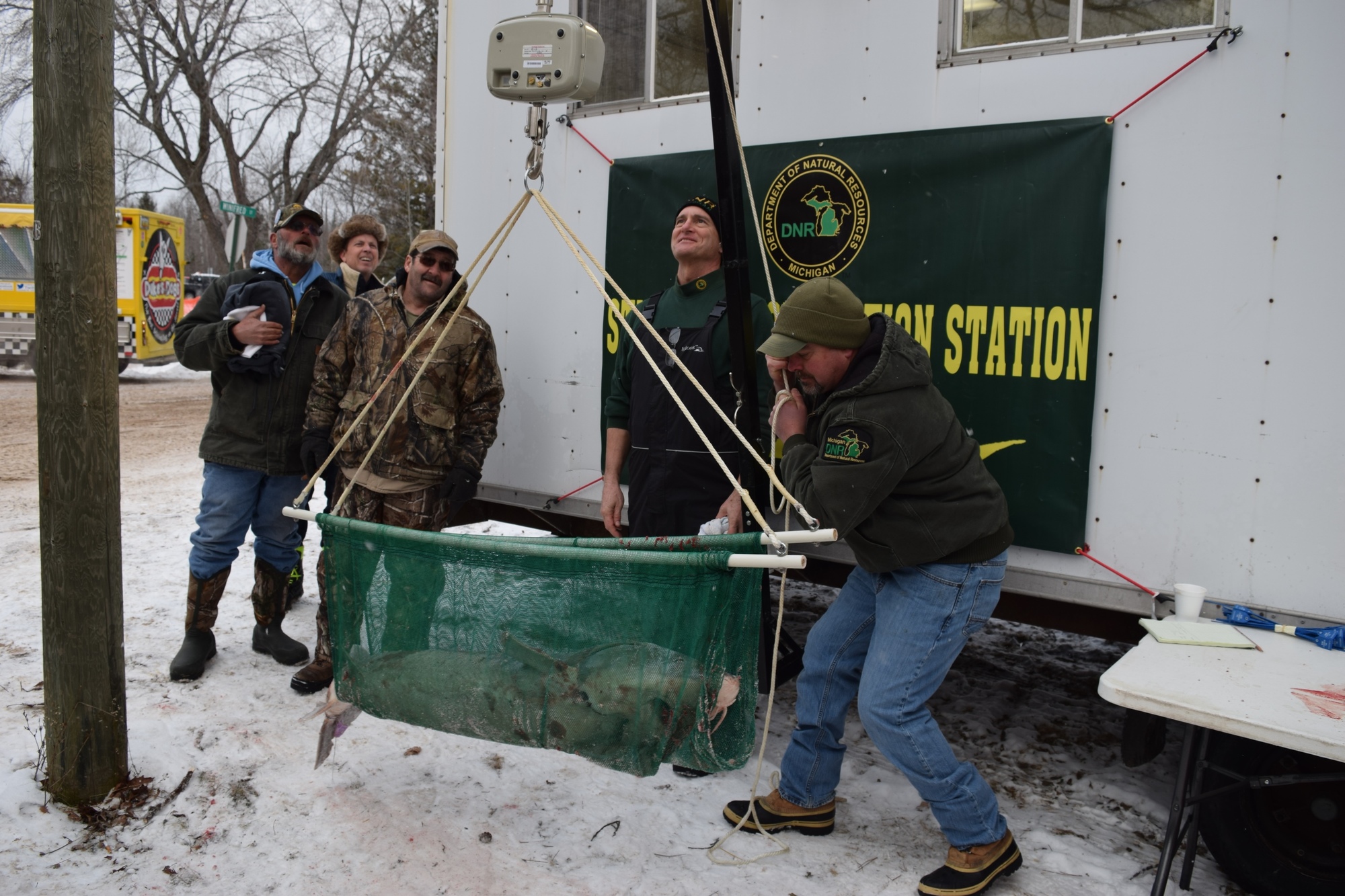 look like there would be many shanties out there,” he said. “But it froze up the last couple of days before the season and it worked out like a champ. Everything went real well. I don’t think it could have been any better.”

Sturgeon season lasted just a little longer than an hour this year, which isn’t unusual in recent seasons. Given the relatively low allocation of seven fish allowed, more than 300 anglers signed up to participate, as well as good ice conditions, clear water and fish moving, Archambo said he figured it might not even last that long.

There were 332 registered anglers on the ice, up from 261 in 2016. Angler registration since 2010 has ranged from 197 to 332. Most anglers pre-registered Friday, Feb. 3, allowing for a more streamlined process.

Fishing for sturgeon on Black Lake has become a must-attend event. Not only do hundreds participate, but thousands more show up to watch, and to celebrate the mysterious fish that have lived in Black Lake since dams trapped these Great Lakes denizens inland decades ago.

“This is the sturgeon population we feel the most confident in,” said Dave Borgeson, Michigan Department of Natural Resources unit manager for the Northern Lake Huron Management Unit. “It’s become one of the most-studied sturgeon populations in the world. We’ve expended a lot of effort to figure what’s going on here, and we’re on what we think is a path to recovery.”

Not many years ago, Michigan fisheries biologists considered the Black Lake sturgeon population imperiled. Long-lived fish that take decades to reach sexual maturity and don’t spawn every year, Black Lake sturgeon were not reproducing as quickly as they were being harvested. 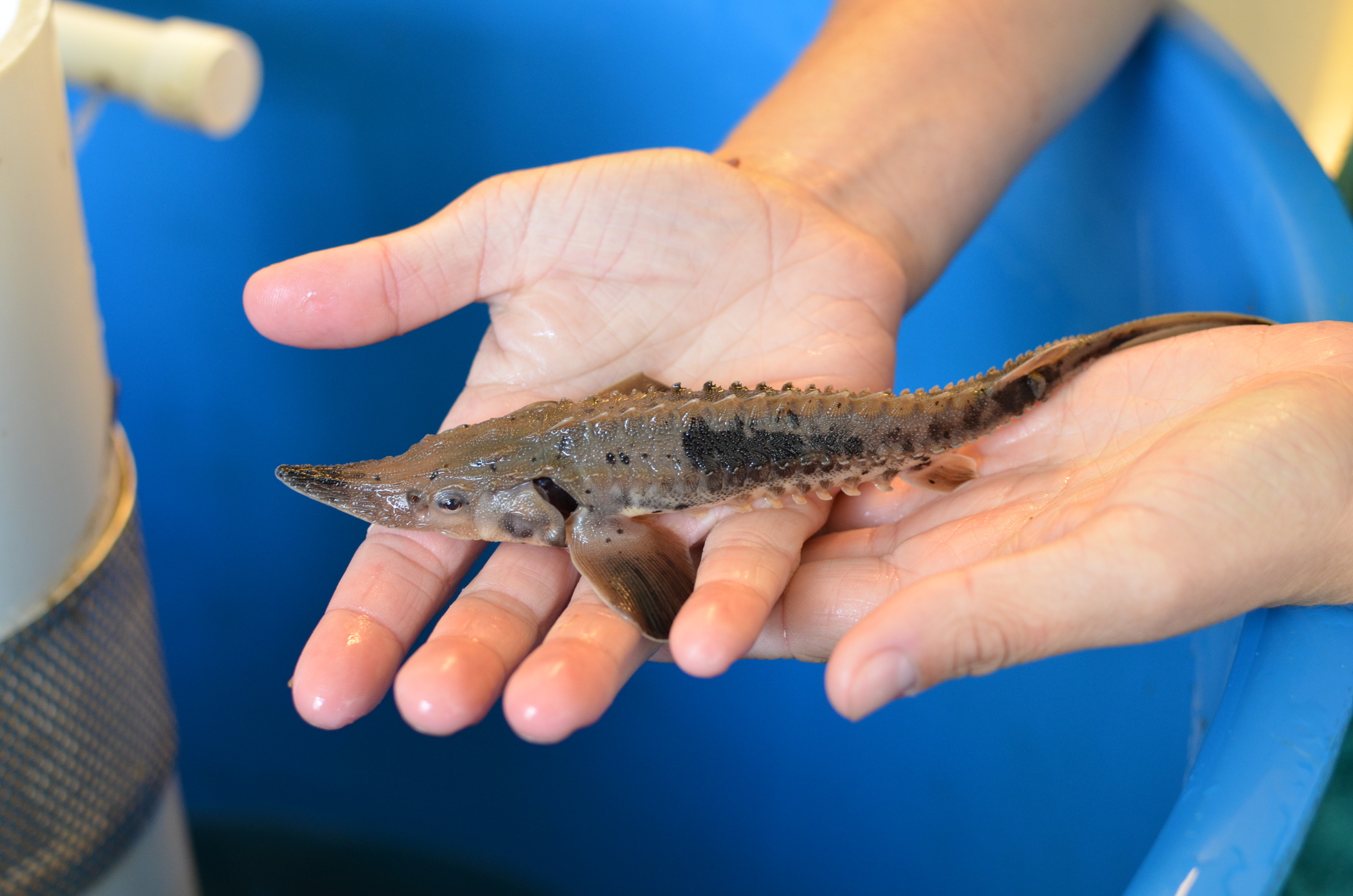 A 1997 survey indicated the population had shrunk to just over 500 adults from a population once estimated at 1,600. It caused the DNR to ponder closing the lake to spearing.

But the area residents, who consider sturgeon spearing an integral part of the local culture, dedicated themselves to preserving this population of primitive fish. They formed Sturgeon For Tomorrow, a non-profit organization dedicated to patrolling the Black River where the big fish spawn in the spring, to guard spawning sturgeon from poachers.

In addition, the DNR partnered with others – including Michigan State University and Tower Kleber LP (owner of the Black River dam) – to build a hatchery facility to give the sturgeon population a helping hand. The results have been dramatic.

“Our current estimate after last spring’s run was 1,113 adults, basically double,” Borgeson said. “Every year we’re learning at that facility. We’ve learned that if we stock them at six inches or greater, we get really good survival of fish. We’ve even reduced our stocking rate because the survival rate of stocked fish is higher than originally thought.

“We’re not seeing huge increases in adults yet, but what’s different now is we’ve got lots of year classes of younger fish represented. The age distribution is representative of a healthy population. Our ultimate goal is to get a naturally reproducing population.”

The DNR uses a model that takes into account harvest from a given year and population data to produce a harvest quota for the following year.

Based on the makeup of the population, fisheries managers figured anglers could harvest 14 fish this winter – roughly 1.2 percent of the adult population – a quota divided evenly between state-licensed anglers and tribal fishermen.

The DNR has experimented with how to allocate the quota over the years and, in recent seasons, has allowed unlimited access. 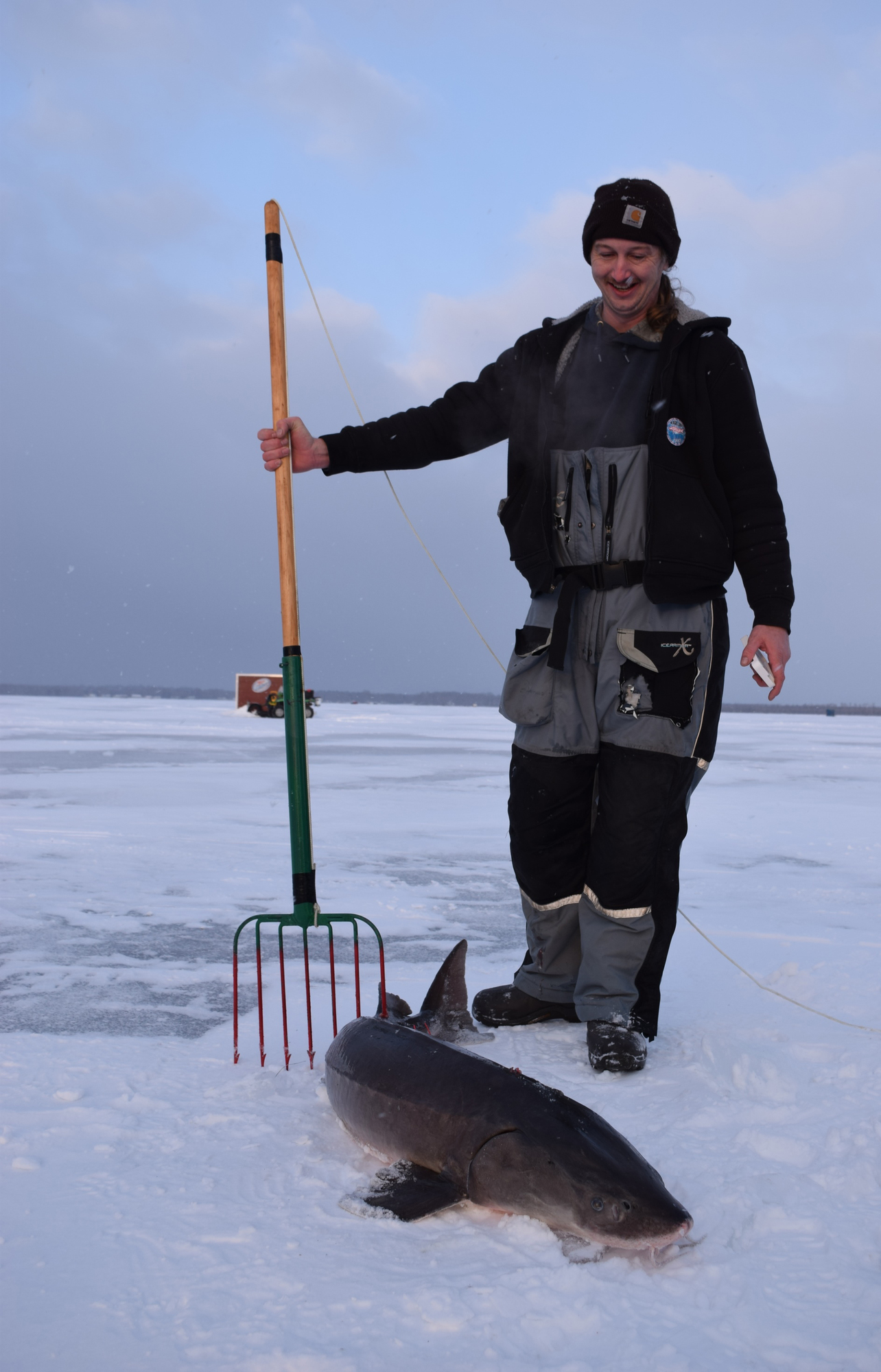 “We‘ve been able to monitor the fishery closely enough that we can shut it down,” Borgeson said. “So whoever wants to come to fish for sturgeon can register and come out – knowing that it could be a very short season.”

“I had to walk to the other side of the hole to spear it,” the 35-year-old auto body shop owner said. “I hit it and I thought it was going to break the spear – you could hear it cracking. It got all tangled up in the decoy line and the spear rope. I couldn’t even get out of my shanty.”

As soon as he could, Trepanier notified fisheries officials and brought the 78.3-pound behemoth into the headquarters.

Minutes later, 34-year-old Scott Ash, a ranch caretaker from Onaway, speared a 72-pound, 67-inch sturgeon just a few yards away from Trepanier. It was Ash’s second sturgeon; he speared one in 2014.

“It came in on the bottom, in 16 feet of water,” Ash said, saying he speared the fish and it didn’t fight at all.

That’s quite a contrast to Rick Taylor’s experience. The 38-year-old carpenter from Fostoria had to struggle to get his fish off the bottom.

“I looked down the hole, saw it, threw the spear and got it in the tail,” he said. “I told my buddy to go get the other spear and he got it in the head and we hauled it out.”

At 9:05 a.m., with a sixth fish reported, the DNR began notifying anglers that the season was closed, but two more fish were on the ice within the next two minutes before everyone could be notified.

That put the state anglers one over the quota. While Borgeson said this is not a desired outcome, there is an agreed-upon system in place to address the situation. 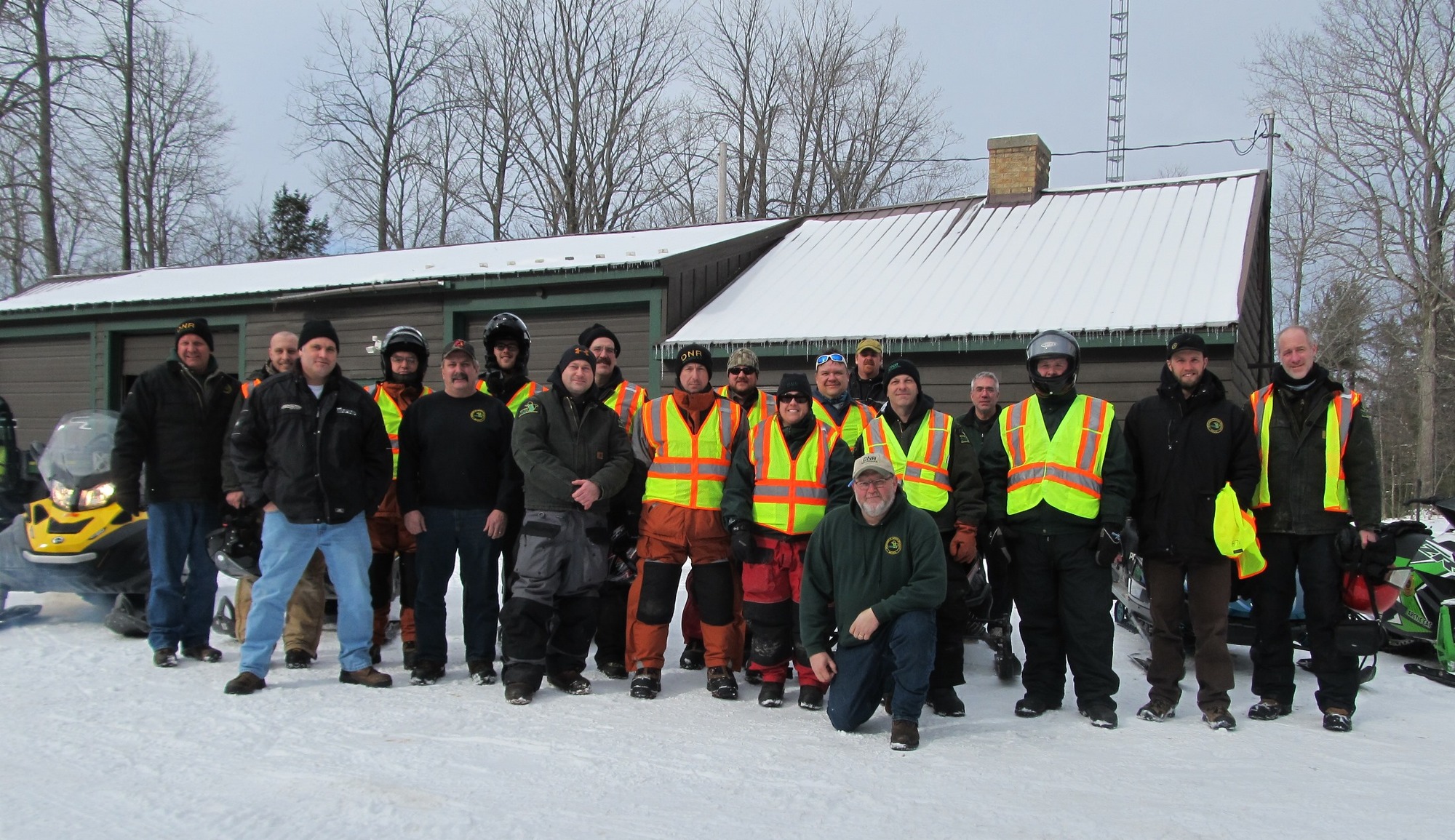 Cole Hudson, a 13-year-old seventh grader from Bishop Baraga School in Cheboygan, was the last to check in with a 33-pound, 55-incher. He had been fishing with his father.

It was a far cry from the state record, which was 193 pounds, 87 inches, taken from Mullet Lake in 1974. However, Hudson said this fish is one he’ll remember for a long, long time.

DNR fisheries biologists said six female and two male lake sturgeon were harvested this year at Black Lake. The females ranged in length from 55 inches to 67 inches and 33 pounds to 79 pounds. The two males were 46 inches and 59 inches and weighed 14 pounds and 42 pounds, respectively.

Six of the eight fish had some sort of identifiable tag from previous years, providing the DNR with valuable information regarding spawning regularity and fish growth.

An example of this is one fish caught by the DNR in 2001, when it measured 61 inches long. It was speared this year and measured 62.5 inches, illustrating just how slowly sturgeon grow, especially once they get big.

The DNR continues to provide an open fishery for lake sturgeon while still recovering the species in the Black Lake watershed. The state’s current harvest rate of 1.2 percent of the population is a safeguard against over-harvest.

This is a rate that has been agreed on in the past with tribal governments. In addition, annual stocking and protection of adults in the river during spawning help to keep building the population.

A Black Lake Sturgeon Rehabilitation Plan was recently approved, having been crafted by the DNR and representatives of the five tribes.

For more information on the history of Michigan’s lake sturgeon and fishing for sturgeon in the state, visit www.michigan.gov/sturgeon.

A Year's Subscription starts at
$25
per year
Subscribe/Renew Today!
Give a Gift

An appalling proposal from the Pennsylvania Game Commission

Why and when do whitetail bucks shed their antlers?

In New York, making a point – and losing one – on new state record buck