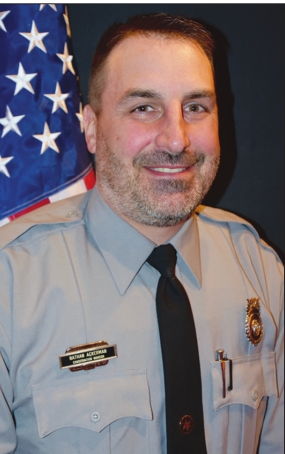 Nathan Ackerman is the Department of Natural Resources (DNR) field warden in Pepin County. The Iowa native was hired 16 years ago.

Besides his field duties, he teaches a portion of the DNR’s “duck school” for warden recruits in the La Crosse area each fall before the waterfowl opener. Recruits make up most of the four-day session and one recruit usually works with Ackerman during the opener.

New wardens are teamed with more experienced wardens during the waterfowl opener, just as is done during most gun deer seasons where two wardens work some of the busiest spots.

“There are hundreds of waterfowl hunters in places here. There are no longer hidden spots. Hunters are everywhere, often using surface-riding boats to get into tight spots,” Ackerman said.

“We generally do high volumes of license checking and sometimes find multiple hunters who don’t have licenses, the two stamps, and things like plugs missing in shotguns.”

During the 2022 duck season opener, Ackerman encountered multiple hunters who didn’t buy a license. He found several in another group without plugs in their shotguns.

“One individual said he knew about the shotshell regulation but chose to hunt with no plug in his gun,” Ackerman said.

“He stuck the gun in the boat hoping to not have it checked, so when we asked to see all the guns, his was missing. When checked, there was no plug in it.”

Ackerman said an ethical hunter understands the need for a shotshell limit and can fix the situation with a pencil, but the plug must be one that’s unable to be removed without taking the gun apart.

Another hunter said he was aware of the regulation for licensing, but said he didn’t plan to hunt beyond the opening weekend and was simply going to take the chance of getting checked.

Yet another hunter didn’t think he needed the state and federal duck stamps.

“We do checks with patrol boats and at landings. This particular season had a onebird bag limit on pintails and there were a good number of this duck in the area, so it would have been easy to over-bag,” Ackerman said.

“We had a case of a hunter getting his limit and coming back for a second limit of ducks the same day.”

Citations for many of these violations run about $200. If there are birds illegally taken into possession, there’s a restitution fee.

While the Wisconsin wardens may check for federal waterfowl stamps, that potential violation is turned over to federal wardens. DNR wardens do not write a citation for that violation.

With licenses and both stamps available for purchase online with an instant record, a hunter without a license and stamps could be cited, accept the citation and restitution for no license, then buy those items from the field using a cell phone and continue to hunt.

The restitution does not go toward the cost of the newly purchased license, however.

“The licenses and stamps are instantly valid and we can check to see if it was entered into the Go Wild system,” Ackerman said

Another Mississippi River DNR warden, Bob Jumbeck, citied three hunters who shot their limits and then double-tripped that same day, too.

“This past season this area was a very good waterfowl season with conditions, birds, and weather being favorable,” Ackerman said.

“A few hunters are still talking about Nov. 11, 1941, when a storm came up quickly and stranded numerous hunters, many of whom lost their lives.”