Poaching With An Unregistered Firearm

• ECOs Doroski and Lovgren recently received a call from a witness claiming they saw two men shoot a deer out of a truck in Orange County. When the Officers arrived on scene, they found two subjects field dressing the deer. Both hunters admitted to discharging their respective firearms, killing the animal. ECO Wood and K9 CJ arrived and located a freshly fired, spent 9mm shell casing, consistent with ammunition found in one of the weapons. Officers ticketed the men for the illegal take of protected wildlife, using a motor vehicle to take wildlife, and discharging a weapon within 500 feet of a dwelling. One of the subjects received a felony charge for unlawful possession of a firearm.

• On Nov. 29, ECO Crain received a report about a dead deer with a crossbow bolt sticking out of it that had been found on a property in the town of East Greenbush. The ECO arrived, located the carcass, and determined it was several days old. Scavengers had picked at the carcass, revealing the stomach filled with corn. With few crop fields in the surrounding area, ECO Crain concluded one of the neighboring properties likely had a backyard bait pile where the deer had been shot. The Officer collected evidence from the scene and took photos as part of the investigation but had no subjects of interest to interview. More than a month later, on Dec. 21, the same property owner contacted ECO Crain reporting a second dead deer on his lawn in nearly the same location. The deer had cut marks consistent with a crossbow bolt. Officer Crain backtracked the faint blood trail in the snow to the backyard of a neighboring property. The following day, ECO Crain returned to the caller’s property with Lieutenant Maloney. The two Officers followed the remainder of the blood trail to a neighboring backyard where they discovered a large area of corn and birdseed strewn adjacent to a homemade shed used as a hunting blind. Inside the blind, the Officers found a crossbow with a thermal scope mounted to it and multiple crossbow bolts with blood and hair. ECO Crain and Lt. Maloney contacted the homeowner and interviewed him about the blood trail leading to his home. The subject claimed that while he is a hunter, he had not hunted recently. However, when presented with the evidence, the hunter admitted to shooting three does over the bait pile without possessing any doe tags. The subject was issued 12 tickets for offenses including illegal take of protected wildlife, hunting over bait, illegal take of antlerless deer without deer management permits, hunting with a crossbow during the late season without the proper license, and multiple tagging violations.

Rimfire Shots In The Night

• On Dec. 4, Lieutenant Buckley, ECO Wood, K9 CJ, and ECO Parker completed an investigation into an illegally harvested deer in the town of Highland. The Officers received a call a day earlier from a local resident who witnessed a deer being loaded into the bed of a pickup truck. The witness obtained a license plate number and shared it with ECOs. The Officers interviewed the subject who admitted to shooting a deer with a rimfire rifle several hours after sunset the previous night. ECOs also determined through the investigation that the same hunter took two other deer during the bow season without a bowhunting privilege. The Officers seized all three deer and charged the subject with illegally taking three deer, taking two deer during the bow season without a bowhunting privilege, hunting with rimfire ammunition, discharging a firearm within 500 feet of a residence, hunting game at night, failing to tag deer as required, and failing to report his harvest.

ECOs Doroski and Lovgren received a call from a witness claiming they saw two men shoot a deer out of a truck. When the officers arrived, they found two subjects field dressing the deer. Both hunters admitted to discharging their respective firearms, killing the animal. ECO Wood and K9 CJ arrived and located a freshly fired, spent 9mm shell casing, consistent with ammunition found in one of the weapons. Officers issued several tickets and one of the subjects received a felony charge for unlawful possession of a firearm.

Too Late for Turkey Sausage 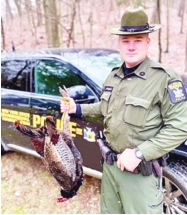 • On Dec. 10, ECO Wamsley received a call from the Town of Hyde Park Police reporting an individual hunting from their porch near several homes. Officer Wamsley responded to the location, interviewed the hunter, and asked to see his hunting license. While the hunter was retrieving his license from the home, ECO Wamsley noticed a freshly killed wild turkey hanging from machinery on the property. The hunter, who returned with his license, said he shot the turkey that morning as it was walking through the yard and planned to make sausage from the illegally taken bird. The 2022 turkey season in Dutchess County was only open during the month of May and from Oct. 15 to 28. Officer Wamsley ticketed the hunter for taking a turkey out of season, illegally taking a protected species, failure to immediately fill out a hunting tag, and failure to tag the turkey upon harvest. Since measurements determined the hunter was further than 500 feet away from nearby homes when he shot the bird, the hunter did not receive tickets for hunting too close to a residence. The case is pending in Hyde Park Town Court.

Online Maps Are Not Infallible

• On the afternoon of Dec. 16, ECO Levanway responded to a complaint by a landowner who found a truck parked on his wooded property in the town of South Bristol. Utilizing the landowner’s UTV, Officer Levanway traveled on snow-covered trails to the truck parked almost one mile off the road. Footprints in the snow led in the direction of the nearby Honeoye Inlet Wildlife Management Area. ECO Levanway and the landowner speculated the subjects were trying to get to the state land without the steep climb from East Lake Road. No one responded to repeated horn honking. ECO Levanway opted to wait at the nearby public road to wait for the pickup truck to leave the area. About a half hour after sunset, the pickup truck reached the road and Officer Levanway interviewed the two men inside. As suspected, the pair advised they had gone up the trails to access State lands using online maps to navigate. The driver also possessed a fully cocked muzzleloading rifle behind the front seat. ECOs remind hunters and others headed outdoors that online maps are not infallible. Hunters should also obtain permission before entering private property, always unload firearms before placing them in a vehicle, and be familiar with how their firearm works. In this case, the rifle was a traditional sidelock muzzleloader. The safe way to carry this style of rifle is at half cock, never at full cock unless the hunter is ready to shoot. The violations for trespassing and possessing a loaded firearm in motor vehicle were addressed with tickets and warnings as deemed appropriate by the landowner and the ECO.

Several agencies and police forces helped local efforts with rescues, food deliveries, snow removal. Utilizing 4×4 patrol trucks and other equipment, ECOs responded to more than two dozen calls to help protect the public and the communities they serve. Over the course of the weekend storm event, more than 30 ECOs worked almost continuously to conduct welfare checks, assist power company workers with restoring power service, and helped rescue approximately 100 motorists from multiple roadways. The Officers were placed on strike teams comprised of New York State Forest Rangers, State Troopers, Department of Transportation workers, and employees from the power authorities where they utilized their specialized training and equipment to push through adverse conditions to restore power and help the public.