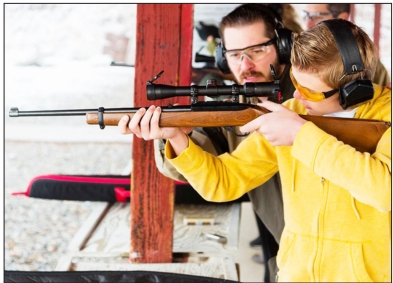 Illinois’ ban on concealed carry by young adults has many concerned about the future of hunting and shooting sports. A lawsuit filed in 2021 challenges the legality of such a ban. Photo courtesy of IMD

Latest move is part of fight that includes lawsuit

Springfield — Attorneys for the Second Amendment Foundation and its allies filed a brief supporting their previous motion for summary judgment in a federal challenge of Illinois’ ban on concealed carry by young adults in a case known as Meyer v. Raoul.

The state’s gun owners – including hunters and shooting sport enthusiasts – view the ban as a potential precedent for groups wanting to outlaw hunting and shooting sports among young residents. The brief was filed earlier this month in U.S. District Court for the Southern District of Illinois.

The lawsuit was filed in May 2021 by SAF, the Illinois State Rifle Association, Firearms Policy Coalition, Inc., and three private citizens in the 18- to 21-year age group, David Meyer, Eva Davis and Mitchell Nalley.

As noted in the new brief, the Illinois carry ban for young adults “must be declared unconstitutional, and its enforcement enjoined, because the Plaintiffs’ Second Amendment rights ‘demand our unqualified deference’,” as explained in the Supreme Court’s Bruen ruling last June. “The text of the Second Amendment leaves no doubt that it extends to typical, law-abiding 18-to-20-year-olds.”

SAF Executive Director Adam Kraut said the Supreme Court has made it clear that the right to bear arms applies to all Americans.

“Based on our nation’s history and tradition, there is no basis for excluding young adults between the ages of eighteen and twenty from being able to exercise their Second Amendment rights as any other adult over the age of twenty-one may,” Kraut said. “The Second Amendment is enshrined in the Bill of Rights and continuing to deprive these individuals of their ability to fully exercise their rights amounts to nothing more than treating the Second Amendment as a second class right.”

Gottlieb noted citizens are considered adults at age 18 for all kinds of other purposes, including marriage, joining the military, starting a business, and entering into a contract, so it makes sense they should be considered old enough to exercise a constitutionally-protect right to bear arms outside the house or in an automobile.

“We’ve been pursuing this case for 20 months,” Gottlieb said. “It is time for the court to bring this case to a conclusion for the benefit of all young adults.”

The landmark Bruen decision reiterated the fundamental right to carry a firearm outside the home, FPC Director of Legal Operations Bill Sack noted.