Stan and Christine Thomas collected photos of skunks, coyotes, red-tailed hawks, crows, blue jays, and even mice on a pair of processed deer carcasses they placed in front of a trail camera in November. They won’t know what other critters might have visited the site because the camera battery died in December. Photos courtesy of Christine Thomas

“A red-tailed hawk flew off the carcasses when I drove into the north field today,” my husband, Stan Thomas, reported when we chatted on the phone.

I was in Austin, Texas, for the annual meeting of the Boone and Crockett Club. I serve on several of their committees, including wildlife health, policy, and university programs. The club is part of a university program, the Douglas Stephens-Boone and Crockett Club Research Fellowship, at the UW-Stevens Point College of Natural Resources. Each year, at least one wildlife student performs research that is mentored by a faculty member and receives a stipend from interest from the endowment named for Doug and the club. 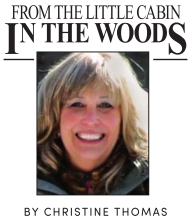 My trip to Austin involved discussions around creation of another such endowment, one to support bear research.

More on that in a future article. The current program has been highly successful. Many of the students have received awards for papers or presentations that arose from their projects. The students become part of a national network of Boone and Crockett professors and research fellows, increasing their potential for career and graduate school opportunities.

Stan’s hawk report was welcome news. Dan Honl, my son-in-law, and I each harvested deer this past gun season. The processing of the meat was a big job. After the last package of meat was in the freezer, we bagged up the carcasses to return them to the little cabin. It is sort of an “ashes to ashes and dust to dust” ritual, that we see as contributing to the circle of life on the land. It is part of the reason we only use nonlead ammunition for deer hunting. We have bald eagles there and care deeply about their welfare. I should also add that, thus far, we have had no reports of CWD in the wild deer herd in our area. We get our deer tested before consuming them. So, our ritual has not caused harm as it relates to CWD.

This year, we put the carcasses on the northwest edge of our north field. We reasoned that the spot might attract woodland scavengers and those that like more open area feeding, like eagles. It is far from the little cabin and not an area where we walk our Airedale, Major, thus minimizing the chance that he will become one of the scavengers. Dan placed the skeletons and anything that did not go into burger under a bushy jack pine. Stan trimmed enough low branches to facilitate affixing a trail camera in view of the bones and meat. Since we processed our deer on Friday, the carcasses went into the field on the second Saturday of the season.

The first visitors were blue jays. Based on the time stamp on the camera, it took them just 45 minutes to find the free lunch. However, I would not know that for a week. The Boone and Crockett meeting always occurs just after deer season. I would not be able to check the camera until I returned. Hence my interest in hearing Stan’s hawk report. It meant that venison eaters had arrived at the scene.

You may recall a column I wrote for Wisconsin Outdoor News two winters ago, when I put trail cameras on a coyote-killed fawn and on a buck that a neighbor arrowed, but which was not discovered until early winter. If you missed that one, you could catch it on my website, www.christinethomasoutdoors.com. Those cameras were in the woods. That column is mostly focused on the fishers that came in. Had I written it later, I could have described a wider variety of critters. There were hawks, owls, and eagles. We had coyotes, raccoons, and bobcats. The photos were magnificent and provided a lot of entertainment that winter. I was expecting to see a similar cast of venison consumers this time. It was not to be.

The blue jays were followed by crows. There was an occasional downy woodpecker. I guess suet is suet! We started seeing photos where two tiny, beady eyes glowed in the frame. I had to enlarge the image and put on my cheaters to see that they were mice. Deer mice? You would need better glasses than mine to answer that question. A house cat showed up one night. A taste for venison or a taste for mice?

There were quite a few coyote photos. This is no surprise.

We seem to have a lot them around this year. I picked up SD cards yesterday. There are photos of an adult and two pups on a trail near the cabin.

The real surprise was that we had a striped skunk on the carcasses. In fact, it was the most frequent visitor. We have had very few skunks at the little cabin in the 16 years we have owned it. Once we found a flattened, meatless skunk skin on a trail. There have been less than five trail camera photos of them, over the years. Apparently great horned owls and perhaps barred owls find them to be tasty treats. This is another reason to appreciate owls. Don’t get me wrong. I do not begrudge the little cabin skunks a venison dinner.

However, Airedales and skunks are not a good combination. I know this from personal experience.

Until yesterday, our last trip to collect the data card from the carcass camera was Dec. 13. We had extensive travel between then and now. Also, that brutal 2022 holiday weather caused our trails to drift in. We were unable to access the camera.

Yesterday, I was really looking forward to seeing what came to feed during the past month. There was not a scrap of meat, or a bone of any kind left on the south side of that jack pine. Nada! Clean as a whistle.

Surely, there would be some fantastic photos documenting the scattering of ribs and legs. I suspected coyotes would be the forces of nature’s entropy. Alas, we will never know. The batteries died in the camera. There is not a single photo documenting whatever drama took place in the darkest nights of December.

Perhaps it is good to need to use your imagination from time to time. Still, wouldn’t it be nice to know?