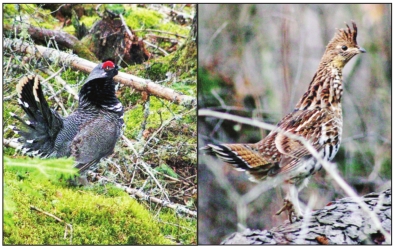 DEC is asking hunters to know the difference between the endangered spruce grouse (l) and the more common ruffed grouse (r). The male spruce grouse pictured above shows the more blackish-gray feathers and the chestnut band on its tail. Females also have the chestnut band but are lighter gray in color and are more likely to be mistaken for a ruffed grouse, which can be identified by the black band on its tail and the distinguished ruffed crest on its head. Spruce grouse photo courtesy of the Ontario Ministry of Natural Resources. Ruffed grouse photo by Dan Small

Grouse, hares are species of concern

The Bureau of Wildlife wants to learn more about the occurrence and distribution of various furbearers throughout New York. DEC is collecting observations of snowshoe hare, fox squirrels, weasels, marten, fisher, bobcat, and otters. These data help the agency better understand the distributions of these species, improving management

A link to the online survey can be found on DEC’s Furbearer Sightings web page www.dec.ny.gov/animals/30770.html.

Hares and rabbits are of great concern because of rabbit hemorrhagic disease virus 2 (RHDV2, a highly lethal and easily transmissible disease that impacts rabbits and hares. It is spread through direct contact between rabbits or contaminated materials (including hunting equipment, shoes, etc.).

RHDV2 is extremely hardy, able to survive freezing temperatures and remain contagious on surfaces for 3 months. Although RHDV2 does not pose a risk to humans or other species, it represents a significant threat to New York’s wild rabbit and hare populations.

Hunters can help protect these species by following these steps:

• Properly dispose of rabbit carcasses in trash that’s taken to a landfill or by burying deep enough to prevent scavenging;

• Disinfect all hunting gear after out-of-state travel with a 10% bleach solution;

• Avoid travel to states that have confirmed RHDV2 outbreaks, and do not bring rabbit carcasses killed in other states to New York;

Although dogs cannot get sick from RHDV2, they can transmit the virus, so minimize contact between dogs and rabbit carcasses.

To learn more about RHDV2, including a map of states where it has been discovered, visit: https://rhdv2.org.

DEC is also reminding hunters to know the difference between spruce grouse and ruffed grouse, and to avoid shooting the former. The Northern Zone, specifically Wildlife Management Units 5C, 5F, 6F, and 6J, is home to both species.

Spruce grouse occur in lowland conifer forests in the Adirondacks. Spruce grouse frequently make their way to roads to eat gravel, especially in the fall, and occasionally travel into upland hardwood forests where ruffed grouse occur.

They can be identified by:

• Both male and female spruce grouse have a chestnut-colored tail band on a blackish tail that contrasts with the ruffed grouse’s dark tail band on a brown or gray tail.

• Spruce grouse tend to sit still or fly to a nearby branch when disturbed unless disturbed by dogs, in which case they may fly away.

• Male spruce grouse appear darker than females and have a red eye comb that can be seen only during the breeding season (May).

• Female spruce grouse are very similar in appearance to ruffed grouse in size and coloration. Differences in the tail band are evident between the two species.

Small game hunters in the Adirondack region must be able to distinguish between these species so that spruce grouse are not shot by mistake. For tips on how to discern the two species, view the Hunting and Trapping Regulations Guide.