After autumn has passed, most fly-fishermen hole up for the winter. Many spend their time huddled next to woodburners, reading books and magazines about their favorite sport.

Some also lean over fly-tying vises, whipping up bunches of flies to re-stock their fly-boxes for the upcoming season.

Only a few fly-fishermen hit the water in quest of trout.

Although you might encounter a hatch of midges and find some fish rising to them, hatches of aquatic insects during the winter are rare.

However, as winter eases into early spring, you want to be on the lookout for hatches of blue-winged olive mayflies, sometimes as early as mid-February, though it is more likely that you’ll first see olives in mid-March. Still, it doesn’t hurt to be prepared.

The usual method of fly-fishing in winter is nymph-fishing. The flow of the stream will determine how large you might want your nymph to be. Winter flows can vary considerably.

Also, water temperatures over 35 degrees appear to be necessary for respectable action.

During high flows you might want to use heavily weighted nymphs and attach a split shot or two to your tippet to sink the fly or flies if you choose to use multiple rigs.

Over the past several years, however, I have gone away from multiple-fly rigs and excessive amounts of split shot.

Like many other fly-fishermen, I have discovered Mop Flies with their heavy tungsten beads, which sink rapidly. 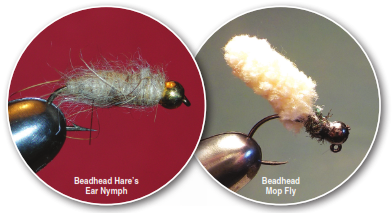 Though I am not sure I catch and release any more trout when using Mop Flies than I do when using regular size 12 beadhead nymphs, I experience far fewer tangles, which is a good thing in winter when your hands get cold when wet.

Last Feb. 23, provides an example of an average day with a Mop Fly. My fishing journal reads, “I hit the creek at 11 a.m. The water was 44 degrees on a 48-degree, overcast afternoon. The water was high and a little discolored, so I used a drab Mop Fly.

“I managed eight trout between 9 and 14 inches before I ended the outing at 1 p.m. Though I hoped to do a little better, it was better than sitting at home.”

When stream conditions are more average, I knot on a weighted size 12 nymph, most often a beadhead Hare’s Ear Nymph.

This nymph works well all season, and winter is no exception. I have caught some large trout on the Hare’s Ear. In fact, the largest winter wild trout I have ever landed was a 23-inch brown on the last day of December a number of years ago.

This trout inhaled a Hare’s Ear Nymph in the middle of the day on a hard-fished central Pennsylvania trout river.

He was a good trout to end the year on.

Another nymph that has been working well for me during the winter is one of my own design. I call it a Bhshpid Nymph, named for the materials I use to construct it: a gold bead head, a couple of wraps of soft hackle, and a body of peacock ice dub.

I use 12 wraps of .015 lead wire under the ice dub to help sink the fly. I like to think I invented this nymph; but with all the creative fly-tiers out there, I imagine someone else has dreamed up this easy-to-tie nymph as well.

Anyway, drifting a beadhead Hare’s Ear or Bhishpid nymph along seams of varying speeds of water or broken water at the head of a pool is the main method of winter fly-fishing in my arsenal.

Trout streams can often flow low and clear during the winter. This calls for smaller flies.

Over the years, I have come to rely on size 14 Copper Johns with either copper or green bodies or size 16 Muskrat Nymphs during low flows.

What do I consider a good winter outing? Feb. 14 of last year provides an example.

Again, from my journal:

“The creek was up some and was 41 degrees. I decided to use a Bhshpid. I fished from noon till a little after 2 p.m. on a day that reached only 36 degrees. I landed 14 trout, including a 21-inch rainbow, which was the last fish of the day.”

There is a small cadre of fly-fishermen who use large streamers to target big trout during the winter. I am not among them. I have used streamers at times during various winters but have not enjoyed much success with them.

However, some dedicated winter fly-fishermen swear by them.

One caution about winter fly-fishing: The water is cold, and you could easily become hypothermic if you are not careful. I got an unpleasant reminder about this only a couple of days before writing this article.

I was fishing a small, 42-degree creek, slipped, and fell in. I was soaked, partially because I was wearing hip boots instead of chest waders.

With chest waders, I would not have gotten very wet. Luckily I was only 100 yards from my truck and three miles from home, and got into warm clothes quickly.

I do try to remind myself to cache a change of dry clothes in my truck when fishing streams that are not close to home – just in case. 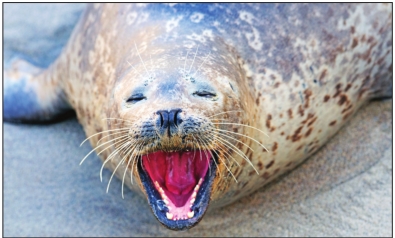 The DEC advises keeping a safe distance and refrain from attempting to intervene during stranding events. Stranded animals will need 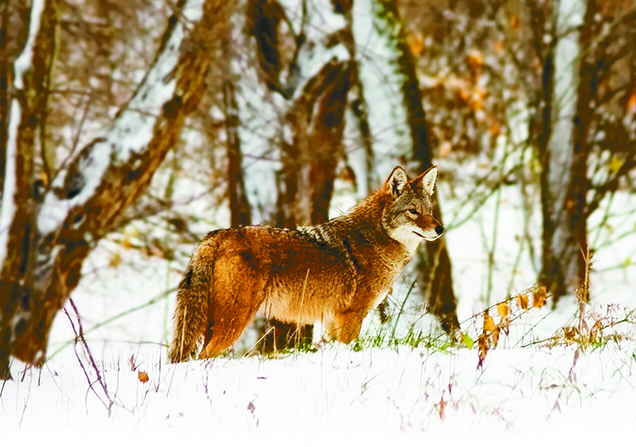 While traditionally thought of as a creature of wide-open spaces, the adaptable coyote has pioneered timber country in untold numbers