The title of Cormac McCarthy’s classic novel, No Country for Old Men, could not more aptly describe a November/December Coues deer hunt by two old men, one almost old man, and one young pup in the Santa Rita mountains of southern Arizona.

When Kevin Wallenfang, of Middleton, Kris Johansen, of Alma, and I packed into the Coronado National Forest on Thanksgiving Day with my cousin, retired Arizona warden supervisor Kurt Bahti, the trip had been in the makings for several years. 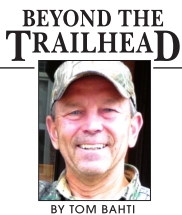 Johansen and I drew tags for a hunt for the diminutive Coues deer in 2019, but an unfortunate accident prevented him from hunting. That year Kurt and I camped in a remote basin where I shot a spike buck on the sixth day of the hunt. In 2021 the three of us did not draw, so we crossed our fingers and applied in 2022. Fortune smiled on us; we drew tags.

Kurt said our most important equipment would be the best optics we could get our hands on, as well as the toughest boots we could afford. Second priority? A flat-shooting rifle and the confidence to squeeze the trigger on shots out to 300 yards or beyond.

The three of us flew from Madison to Tucson the day before Thanksgiving, with the vagaries of airline travel routing us through Atlanta. Our packs and rifles arrived in Tucson on schedule, where Kurt picked us up and ferried us to his home outside Sonoita.

We packed into the mountains on Thanksgiving morning.

Kurt and I are in our 70s, Kevin in his 50s and Kris in his 40s, so we elders vowed to work those young pups like rented mules. Kurt, an old-school cowboy game warden is still tough as nails, although he’s battling a horrible disease. 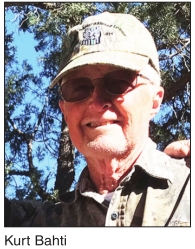 We made the four-mile haul into a campsite, next to a small bench above a spring where we’d be able to pump filtered drinking water over the course of the week. Glassing that afternoon from a vantage point not too far from camp resulted in the sightings of three bucks and several does – encouraging sign just hours before the Friday opener.

A 5 a.m. opening-morning breakfast of Jetboil stove oatmeal and instant coffee prepared us for a climb to the glassing point. I spotted a nice buck some 500 yards away at the top of the basin, where Kurt assured us it would bed down for the day. Johansen decided to make the climb to get into position and wait for it to move later in the day.

Wallenfang and I moved to a different glassing point just before noon, then moved again early in the afternoon. As we began to set up a short distance apart at the new spot, I heard Kevin hiss that there were bucks in the canyon below.

Deer started to move up the hill across from us. I got out the shooting sticks and ranged a buck and doe at just over 180 yards. As Kevin watched two other bucks move upslope and out of sight, I squeezed off a round and watched the 6-pointer tumble down the slope.

It took us a solid half hour to cross the canyon and get to the deer, by which time Kurt had left his glassing spot and joined us for the celebration. Shortly thereafter we heard Kris shoot from far above us, but he let us know that he had missed the buck I’d spotted earlier in the morning. After boning out the buck and making the haul back to camp, we completed the day with a dram or two of good sip ping whiskey and tenderloins grilled over the campfire.

On Saturday morning, Kurt and I packed the meat out to the trailhead and drove to his house to begin processing the venison. A hot shower, followed by a great cheeseburger at The Copper Brothel Brewery recharged our batteries.

After a good night’s sleep in a real bed, we finished packaging the deer meat, drove to the trailhead, and packed into camp. We were back at the glassing point by early afternoon.

It didn’t take Kurt long to spot a nice buck bedded in the shade of a juniper. The young pups were on the far hillside looking for the same buck. Kevin maneuvered in as daylight waned. As we watched through binoculars, he closed the distance and the buck bolted from its bed, but made the fatal mistake of stopping for a quick look back at about 60 yards, where Kevin made an outstanding off-hand shot.

Kurt and I got back to camp as darkness closed in. We watched their headlamps on the far hillside as they cut up the buck and began packing it back to camp. Celebratory libations, followed by a venison tenderloin and loin fondue, cooked in smoking-hot rendered bear lard and skewered on yucca cactus spears, topped off the evening.

Monday was spent in camp, doing chores, caping out Kevin’s buck, and glassing for Kris. We didn’t see any bucks that day, and made plans for all of us pack out to Kevin’s deer on Tuesday to process venison, take out extra gear, and replenish food supplies. An excellent Mexican meal at The Copper Brothel, hot showers and good night’s sleep had us ready to go early Wednesday morning.

Kurt had told us that he just couldn’t take the grind of more trips back into the mountains, and he’d be staying behind. He did, however, have an idea of an excellent hunting route back into camp that would give us great glassing points of some new country and an approach to camp from above, albeit from a much rougher approach.

Wednesday morning we hiked in, set up and began glassing from new vantage points, finding three bucks about 300 yards out after an hour or so. The trio kept moving and never gave Kris a clear shot. Moving further up the ridge, we were watching a doe on a far hillside when Wallenfang peeked over the lip of the bowl and began signaling that he had a bedded buck spotted on the far side.

Kris bellied into a prone position, used his pack for a rest, and shot at 300 yards. The buck was hit hard, but stumbled into some brush. Kevin and I continued to glass the area while Johansen moved. Kevin spotted the buck laying down near some rocks. Kris made another good shot and the buck vanished behind a huge boulder and never emerged. After about 20 minutes, Kris made the long trek down and across the basin, finding the buck lying dead where we had last seen it disappear. We quartered the deer, packed it out to the trailhead, and returned to Sonoita for celebration and grilled fresh Coues deer backstrap.

On Thursday morning we humped into camp empty, broke down the tents, and packed everything out to the trailhead.

It was a bittersweet moment for me, as Kurt had said this was his last backpack hunt into that area. I knew I would probably not be able to physically repeat what was necessary on a hunt like that in the future.

Getting old isn’t for sissies, and, in this “no country for old men,” I said my goodbyes to the Coues deer of southern Arizona.

Tom Bahti is a retired Wisconsin DNR wildlife biologist and deputy conservation warden from Sobieski, who values public lands and the many wild places that they harbor.