We’re in between seasons, so not much to report. Ice anglers ready once conditions allow access.

Although anglers have been getting on the ice, extreme caution is advised as well as following local weather conditions. There have been too many days, and some nights, with the temperatures well above freezing. Some anglers uncovered their boats and hit the lakes during the warm spell. One piece of good news is that local deer herds – short on winter food sources – are sure getting a break so far this winter.

Ice conditions are spotty across the region. Best bets may be at higher elevations, like Grafton Lakes State Park. Extreme caution advised.

Stream fishing may trump ice fishing for a while until things cool down.

The water is down to 32 degrees and is on the dirty side. But there has been a steady bite off the high wall. Running jigs under a slip float or plugs off a side planer are two proven techniques. Otherwise, we recommend fishing the slow edges along the shore with egg sacs and jigs. 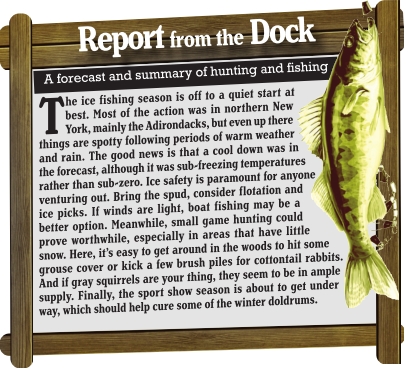 With the river temperatures hovering right at freezing, the increase in flow will have the steelhead moving to the edges. We recommend concentrating on the slow seams and inside edges. Egg sacs have been the bait of choice with white, pink, and blue being the most consistent colors. Other good baits are pink worms, jigs, and the occasional bead. When fished under a float these baits have been producing plenty of action. Fly anglers have been finding success running stoneflies in a variety of colors: copper, blue and chartreuse. An egg sucking leech or woolly bugger in black or olive has been productive.

For now, there are no reports from DEC for other fisheries in this region. Things should pick up during the ice fishing season.

DEC is always looking for new participants in the Angler Diary Cooperator Program.

If you fish Cayuga Lake, Owasco Lake, Skaneateles Lake, Otisco Lake or any of their tributaries and want to learn more about this program and how to sign up, please contact the Region 7 Fisheries office at 607-753-3095 ext. 213, or on-line at fwfish7@dec.ny.gov.

The warmer trend with some rain has made Maxwell Creek’s flow decent. Fish the pools on both sides of Lake Road. Currently there is no ice build-up on the shores. January is steelhead time so use egg sacs, beads, flies, or small jigs. Keep everything bright. Don’t forget the piers at Sodus. The trout will be in the current. Always use caution fishing the channel. Use a long-handled net and stay safe on the pier.

Ice fishing is on hold. There was a recent incident on the south end of Sodus Bay when an ice angler broke through the ice. All the bays and ponds have open water and if you launch a small boat to fish for perch make sure you use caution. In the Erie Canal, Widewaters also has open water. If you do launch a small boat beware of slippery ramps.

For now, there are no reports from DEC for other fisheries in this region. Things should pick up during the ice fishing season.

I hope the holiday season was a great one for everybody and their families. It motivated me to start the organization of the gear section of my garage. Quite a few plugs I’ll be retiring that served me well over the years.

Quite a few others getting a tune up with split rings and front trebles and many others getting the update of a single rear hook instead of a treble.

The convenience and safety of a single hook in the back is one thing. I’m hoping to see another impressive run of blue fish come late April. The past couple of years using plugs with a single rear hook made for much easier and quicker landings, along with reducing the chance of ending up with a treble in my hand. In respect to stripers, the single hook preempted any heartbreak of losing bigger fish that can break off with the tail treble sticking into the fish and giving it leverage to get free. More importantly, is reducing release mortality.

The tease of warmer temps after the Christmas deep-freeze gave just enough motivation needed to get out a cast a line. I didn’t hear of anyone getting holdovers off the beach but there were a few bass caught in shallow waters of the back bays. With no real fluctuation in water temps, the best bet is small paddle tails with an ultra-slow retrieve to entice resident fish conserving their energy and very picky on what to strike at.

Some nice white perch catches were had in brackish waters on light tackle with sized down plastics. In fresh water spots a few pickerel and crappies were taken. While there was some ice before the new year, that quickly disappeared and dashed hopes of ice fishermen.

Duck hunters got some time in but a bit of a disappointment for the number of targets around in the past week or so.

There continues to be some thin unsafe ice covering parts of the south basin, while the north basin remains open. There has been no measurable fishing activity lately.

There has been a basin-wide blowout. With high winds, frigid temps and a pile of snow. This season’s steelhead run has been excellent with quality catch numbers and fish sizes. The streams should continue to produce when conditions are favorable. In cold water conditions, drifting techniques with egg sacs, trout beads, egg flies, jigs and nymphs fished at the bottom is a dependable approach. Slow down the drift and target tailouts, seams and current breaks.

Unfortunately for Western New York fishermen, many of the local waters are still feeling the effects of the Blizzard of 2022. Waves more than 30 feet high were reported on Lake Erie during that historic storm, creating a very turbid situation. Winds continue to be a bit of a problem, but now there’s more than an inch of rain being added to the system in addition to any remaining snow melt.

The rain will help the smaller tributaries off Lake Ontario. Most have been low and clear, with little to no impact from recent snows. There should be some trout at Burt Dam and Fisherman’s Park, but pressure has been light. To the east, there have been some boats heading out into the lake when the winds cooperate. Fish the shoreline in 15 to 25 feet of water with Stinger spoons or stickbaits in bright colors like orange, chartreuse, or firetiger. Look for a distinct mud line coming out of the creeks and troll the fringe areas of the breaks. Normally it’s browns, but lake trout and steelhead have also been reported.

Following the holiday weekend storm, things were finally starting to slowly clear according to Lisa Drabczyk with Creek Road Bait and Tackle in Lewiston. As we’ve mentioned previously, the shore casters in the Niagara Gorge will be the first to find slightly clearer water, in tight. The water clarity is still very limited, especially when you figure in the recent rain storms. It’s still difficult to catch fish, but not impossible.

Some steelhead are hitting on spinners and eggs or egg imitations. Boaters have picked up some steelhead in Devil’s Hole and Artpark, as well as lake trout and brown trout along Fort Niagara and out on the Bar. Beads, live emerald shiners, Kwikfish, and MagLips are catching fish, but you do have to work for them. Plan on losing some hardware when fishing from shore.