Allegany County’s Cuba Lake is one of those waters where, in a typical year, there are two fishing seasons. And if Mother Nature cooperates this winter, that “second season” could begin soon.

Located just north of the village of Cuba, the 445-acre lake is known as a popular ice-fishing destination for anglers targeting panfish, walleyes and northern pike.

“Our last survey of the lake was in 2017, but credible angler reports suggest that the yellow perch population could produce some good catches this coming winter and the next few years,” says DEC Region 9 fisheries biologist Justin Brewer. “Although slow growth and lower abundance is typical for some species, Cuba Lake continues to produce some impressive-sized yellow perch, bluegill, black crappie and smallmouth bass.” 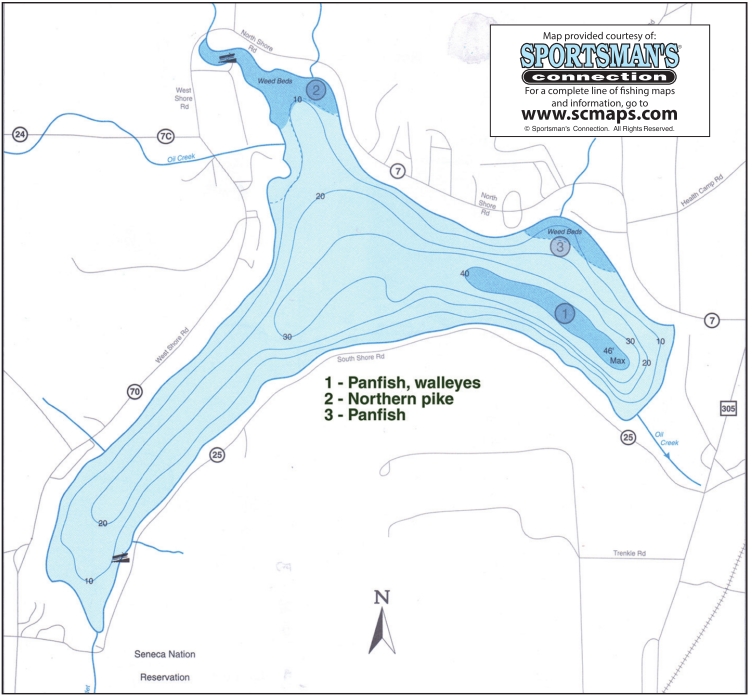 That said, ice fishing can be a hit-or-miss proposition, so some running and gunning (drilling) may be required to locate the panfish or the larger species. If you find them, it can be a memorable day on the hard water – so much so that DEC recommends a conservative harvest or even catch-and-release fishing. “It’s important for all fish populations in small, heavily fished lakes like Cuba Lake, but especially for species like bluegills, largemouth bass and black crappie that can easily be impacted by over-harvest,” Brewer said.

It’s generally a pretty standard game when taking to the ice: panfish pursuers commonly use jigging rods tipped with ice flies, wax worms or maggots, or set a series of tip-ups with minnows as the bait. The pike and walleye crowd usually go the tipup and larger minnow route.

When it comes ice fishing opportunities, anglers target the panfish, pike and walleyes. That said, Cuba Lake has good numbers of both smallmouth and largemouth bass, and the bronzebacks in particular are seeing good growth rates, topping the 12-inch size minimum by age four. The 2017 DEC survey of the lake turned up smallmouths topping 20 inches, and local bass tournament anglers have in the past weighed in some lunkers of both species.

DEC began stocking walleyes in Cuba Lake way back in 1927, a practice that was halted in 1999 when surveys showed a self-sustaining population. “Despite a lack of large, old, trophy-sized walleyes during the 2017 survey, the age and size structure of the population was fairly balanced and there were plenty of legal-sized – and sub-legal – walleyes to be caught,” Brewer said. But Brewer adds that anecdotal evidence from Cuba Lake’s angling community suggests that older, larger walleyes are occasionally caught. And since it’s now been over 20 years since walleyes were stocked in the lake, it’s safe to say that a stable spawning stock exists and walleye are here to stay.

The northern pike were accidentally introduced in the lake in the early 1990s, Brewer said, and have since taken off and are now available in good numbers.

Within the panfish lineup, yellow perch are the stars of the show; DEC’s 2017 survey indicated the ringbacks are reaching and even topping nine inches by age four, with fish over 12 inches available. “The excellent growth rates suggest a fairly balanced, sustainable population that should continue to provide abundant forage for predator species and quality perch fishing opportunities in the coming years,” DEC’s survey reads.

Bluegills reaching 10 inches and rock bass up to nine inches were also seen during the 2017 survey, and angler reports indicate the lake supports a solid population of black crappie, which were not a target of the survey. 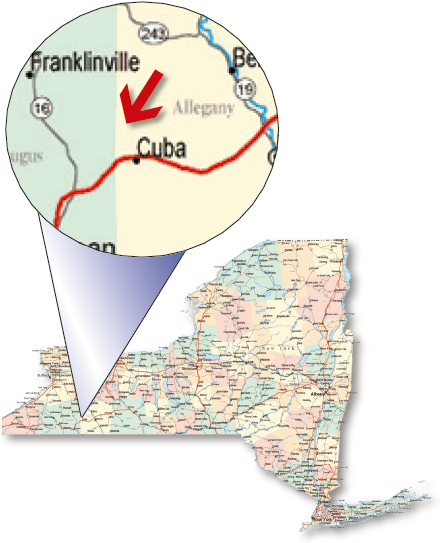 Cuba Lake is managed under statewide fishing regulations, with one major caveat. A small portion of the lake’s southwest corner near the spillway lies within the Seneca Nation of Indians territory and is therefore subject to SNI regs, which require anglers to have a Seneca Nation fishing license.

Cuba Lake lies north of the village of Cuba, and can be reached off Interstate 86 to Route 305 North. County Route 25 takes you along the south shoreline, while Route 7 follows the east side of the lake up to West Shore Road.

As always, exercise extreme caution when taking to the ice, not only at Cuba Lake but any water you target. Four inches of solid, clear ice is a good yardstick, but keep in mind ice thickness can vary from one area of a waterbody to another.

While access can be had during the open-water season at DEC’s six-acre public fishing access site off West (North) Shore Road near the Rawson Creek inlet, that’s not the case during the winter due to a lake drawdown, which lowers water levels to 6-8 feet (the manmade lake was created in 1858 as a water source for the Genesee Valley Canal system). Instead, public access for ice anglers is available at a parking area at the south end of the dam on South Shore Road. All other access is by permission only via private property.