What were you doing when you were 8 years old? Watching cartoons? Playing video games? Causing trouble with your neighborhood friends?

Todd Koenig was working on a “small project” that would foreshadow his future occupation. He took the brain from a pocket gopher and used it to tan a weasel – his first brush, he said, with taxidermy.

“Braintanning is something Native Americans did, and I read about it as a kid,” said Koenig, who grew up hunting, fishing, trapping, and incessantly reading Fur Fish & Game, Outdoor Life, and other outdoors periodicals.

Because Koenig didn’t have any money or access to “fancy chemicals,” he improvised. “There are acids in the brain that help break down the membranes of the skins, but also preserve it and convert it over to leather,” said Koenig, now 49. “That’s kind of how I got started.”

In 2020, just days before the COVID-19 pandemic hit, Koenig opened a taxidermy business. His journey to becoming a full-time taxidermist relatively late in life has taken many twists and turns. 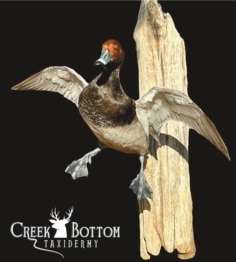 Before opening his taxidermy business, he left a Bostonbased corporate sales and marketing job that focused on science and technology, a job that had him traveling as many as 180 days a year.

“It was too much,” said Koenig, who, despite his busy schedule, always made time for his outdoor passions. “After many years of doing a job that wasn’t core to me and my values, I had a conversation with a close friend who inspired me to pursue my dreams and go all-in, full-time. That was the best decision I ever made, and I wished I would have done it many years prior.”

Koenig takes immense pride in his work. He considers taxidermy an art form and obsesses over the smallest details, whether he’s working on a fish, deer, or game bird. His work is starting to get recognized, too. At Game Fair in Minnesota in August, Koenig won a “People’s Choice” award for what he calls his five-bird dead mount, which incorporates five drake ducks (mallard, woodie, green-winged teal, hooded merganser, and bufflehead) and other traditional elements common to waterfowl hunts.

“The mount was inspired by a hunt my dad and I did eight years ago,” said Koenig, adding that the mount was designed to evoke memories of hunts past and to give hunters an option beyond basic bird mounts. “So I wanted to create something tangible for people to consider. Larger taxidermy work or ‘wildlife art’ have always been popular, and hunters seem to enjoy them.”

When meeting with potential customers, Koenig said he spends considerable time interviewing them to determine what they want. Several considerations are made, from space to budget and more.

“I want to create a memory, and the more information I have, the better,” he said. “Sometimes the smallest things – the smallest details – can add so much to what I’m trying to create for a customer. When they look at the final product, I want them to love the mount, yes, but I also want them to feel some nostalgia for the hunt. It’s about preserving memories.”

Koenig said he loves to hunt birds, especially ducks and geese, with his father.

This season will be the 42nd year they’ve shared a duck blind.

As the bird-hunting seasons continue in earnest, Koenig offers his thoughts and tips for hunters who want to mount one (or more) of their birds.

“All taxidermists have personal preferences and recommendations, so be sure to ask them before you bring in a bird to be mounted,” he said. “In general, if you want to mount a bird, make sure you handle it with care in the field as much as possible. My goal as a taxidermist is to mirror what we see in nature.” 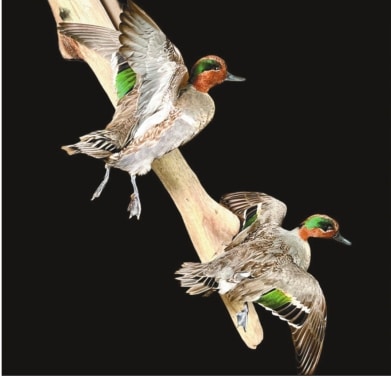 • Keep the bird as cool and dry as possible. Don’t let it sit in the sun – the shade is better.

• Handle the bird as gently as possible. Do not use a game strap or carry it by its head, neck, or bill.

• If possible, cool off your bird in a cooler with ice. Keep it dry, though.

• Wipe blood off of feathers with paper towels. Tear off some small pieces of the paper towel and gently place them in both nostrils and in the mouth to absorb any additional blood.

• If you shoot a bird and you think you want to mount it, retrieve it yourself. Dogs can damage the body and the feathers.

• When it’s cold outside, do not lay birds on any metal surface, such as the floor of a boat. The bird will freeze to the metal and when you grab it, the feathers could pull off or be damaged.

• Take some reference photos for your taxidermist. In particular, photograph the head and bill, feet and legs.

“I do all my finishing work by custom painting every bird, fish, or animal per customer photos, so the more references you provide, the better,” he said.

When you’re on a hunting trip or don’t have time to get your bird to a taxidermist promptly, freezing your bird is a viable option. It helps preserve it.

When freezing, gently place the bird inside a large or extra-large freezer bag in a resting position with the head facing forward (like its sitting relaxed) and the legs/feet against the body.

“Do not tuck the head under the wing like most people have done historically, because it usually stretches the neck and puts the neck and chest feathers out of place,” Koenig said. “Make sure the feathers look streamlined, and squeeze out as much air as possible. Place this bag in another freezer bag and squeeze out the extra air.”

• For pheasants, he says to “staple the freezer bag up to the base of each side of the tail and sandwich the feathers in cardboard to protect them.” Then use duct tape to seal the edges of the freezer bag, as well as the cardboard to hold it in place.

• If you’re worried about the bird getting moved around and damaged in the freezer, wrap the freezer bag in a wet towel like a burrito and freeze it in a flat position. The towels will act like a cast and protect it.

“But get to the taxidermist as soon as possible,” Koenig said. “Try not to use vacuum-sealer bags because the texture can leave imprints on the feathers and skin.”

• Be honest. Tell your taxidermist about any shot damage, broken wings or legs, as well as feather damage from a dog. That way you and your taxidermist can choose the best position for your mount.

“For me, don’t use socks or nylons to put the bird in. There is no way to adjust the feathers once it’s in there … and if you pull them out to do so, you’re wrecking most of the feathers,” he said.