Blue Ash, Ohio — “About a C- for the first part of the season, but I’d give myself a B+ to an A- for the last three events.”

That was Alex Redwine’s evaluation of his first season on the Bassmaster Elite tournament trail. Sitting in his Blue Ash dining room, the 23-year-old professional angler took time to discuss his experiences after a full year of competing on professional bass fishing’s most prestigious circuit.

This young man started making footsteps into competitive fishing well before making tracks in the Bassmaster Elite series. He joined the Cincinnati Youth Bass fishing club when he was 13. The competitive drive he had on the baseball diamond followed him to the deck of a bass boat.

His youth fishing club experience culminated in an Ohio Junior Federation Championship at Rocky Fork Lake. He identified his father, Steve Redwine, as his primary influence when it came to fishing. 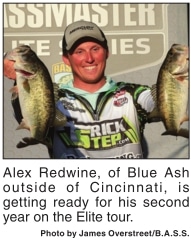 He further explained that his father had fished several bass tournament circuits, including BFL and FLW events.

Following high school graduation, Alex Redwine enrolled at the University of Cincinnati. He was also expanding his tournament fishing at this time. Midway through his sophomore year, he took stock of where he was headed. He then changed courses from a UC classroom to a Ranger bass boat.

“I was in college, but couldn’t justify why,” he said.

The time and the expense would have made sense if he had had a clearcut idea of where he wanted a college education to take him. He was also expanding his tournament participation at this time. When he realized he was having more success catching bass than he was taking classes, Redwine decided to follow his heart.

He entered the Bassmaster Opens, spending two years on the circuit that offers an angler a shot at the Bassmaster Elite Series. Fishing two Open divisions in his second year was only taking the hopeful angler home at the end of each tournament. Then his luck went from bad to worse before the tide turned in his favor.

“I was heading to a Southern Open tournament when I got rear-ended,” he said. “I had to tell Dad the boat was totaled. I had to borrow a boat so I could fish the tournament.”

With the insurance money for the totaled Ranger, Redwine’s father bought a Phoenix bass boat from Wieda Marine in northern Kentucky. The Phoenix proved to be the silver lining as Redwine had a tremendously successful “second season” on the Northern Open series.

Outstanding finishes in the three Northern Opens had Redwine tied for first. A series of tiebreakers put him third place, but that finish earned him an invitation to the 2022 Bassmaster Elite circuit.

Qualifying for the Elites is a monumental task. So is covering the expenses, where the
entry fee for each tournament is $5,000. Despite his professional
inexperience, Redwine followed his dream to compete on the Bassmaster
Elite Series. The dream, though, had more of a nightmare edge after the
first five tournaments of his rookie season.

“I was 71st for the season. I was wondering if I belonged on the Elites,” he admits.

Much like the second half of his last season of fishing the Opens, the Elite
trail took its annual northern swing for the final three events of the
year. Redwine had fished five tournaments up to that point in the
season. He had cashed two checks for a total of $5,000.

By the time the final event of the season on the Mississippi River at
Lacrosse, Wisconsin, concluded, Alex had garnered three checks in the
final three tournaments, earning a total of $30,000. His attitude on the
water transformed from doubting he belonged to what he describes as a
“sixth sense” that is totally positive.

“As soon as the tournament was over in Lacrosse, I was ready for the next one to start,” he said.

Now that the 2023 Elite schedule has been released, he knows the first stop
will be at Florida’s Lake Okeechobee. The Elite schedule takes its
professional anglers all over the country, which is another hurdle
Redwine must clear.

“Fishing a lake for the first time against guys who have fished it for 15 years can be intimidating,” he said.

This aspect puts a premium on the limited practice days prior to the first
day of competition. Redwine describes pre-fishing time as finding his
comfort zone on whatever body of water the Elite trail schedules for
that event.

“Twelve feet and in is where I’m most comfortable,” says Redwine.

No doubt his early fishing experiences on the Ohio River have had an
impact on his preference for shallow water over deep. That statement
propelled our interview forward, as in forward facing sonar technology
that has become a controversial topic among anglers.

“It allows us to learn fish behavior and catch fish we’ve never been able
to catch before,” is how Redwine describes forward facing sonar. He
added that Elite anglers have five sonar units on their boats.

“Most guys have three up front and two on the dash,” he said.

Redwine has never been more anxious to start his Elite season than he is now.
His 26th place at the St. Lawrence River, 29th at South Dakota’s Lake
Oahe, and 16th place on the Mississippi River convinced him that he does
belong on the Bassmaster Elite trail.

Many Elite anglers travel and stay together as they crisscross North America. For Redwine, that
fellow Elite angler is Jay Przekurat, of Wisconsin. Both are 23 years
old, but one has already owns a blue trophy.

“When Jay won at the St. Lawrence River, I was a little jealous,” admitted Redwine, “but it lit a fire in me to keep working.”

Przekurat won the event with a four-day total of 102 pounds, 9 ounces. And all
were smallmouth bass. It was the first time any Elite angler had won an
event with all smallmouth bass that surpassed the century mark in
weight.

Being on the Elite trail has meant Redwine has had to increase his marketing skills.
The $45,000 in entry fees and nearly as much in expenses mean an angler
relies on sponsors even more than tournament winnings.

His strong finish in 2022 has led Redwine to quickly identify his two main
goals for the 2023 Elite season. Earning a spot in the 2024 Bassmaster
Classic and making a top 10 for an Elite event this year are on his
tournament to-do list.