Ways to become a better lakeshore property owner in 2023

As a young reporter many years ago, I was assigned to write a story about a lakeshore owner who, according to my editor, was “doing some work to protect the lake.” I was to report to the man’s house at a specified time the following week to do an interview and to take some pictures.

With little else to go on by way of background, I assumed he’d started a water-protection group or had another big-picture idea to protect the lake.

Several days later, I pulled into his driveway and found myself parked among big trucks and a whole host of landscaping equipment. I gathered my camera and notebook and walked to the back of the house, looking for my interviewee. The lake was evident, of course, but so too was a relatively steep hill that led from the house to the water. The lawn had been torn up and there wasn’t much but black dirt where the grass should have been.

It didn’t initially strike me that I was looking at what I’d come to see. Moments later, the owner walked out the back door and we started chatting.

Turns out, the black dirt and all the construction equipment – along with landscaping materials, seeds, and other native vegetation I hadn’t yet seen – were exactly what I’d come to see. He wasn’t forming a new group or taking water-protection advocacy to some new level. He was simply doing what he could on his property to keep the lake clean.

“We can sit and talk about how much we enjoy a clean and clear lake, but without actually doing something about it, they’re just a bunch of meaningless words,” he said. 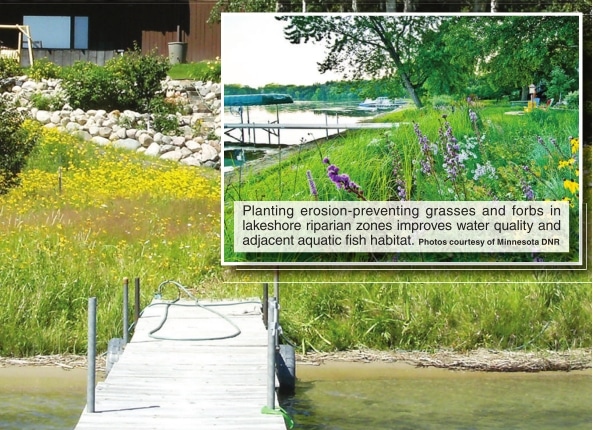 Years later, all the native vegetation planted that day had grown. To people who expect to see a neatly manicured, urban-type lawn leading down to the lakeshore, his property may have looked like it was owned by someone who’d pulled the plug on lawn maintenance. To me (I don’t own any lakeshore property, but I fish on this particular lake a fair amount), and to anyone else who looked carefully, it was a constant reminder that every owner of lakeshore has a role to play in ensuring future generations of people have the opportunity to enjoy the same, or better, water quality that we do today.

As you look ahead to 2023 and think about all the fun that awaits on the lake, keep these things in mind to ensure you’re doing your part as an ethical riparian area owner.

Whatever the zoning authority in your area, it’s likely there is a degree of
limits on the amount of impervious surface you may have on your lot.
Impervious surface is anything that doesn’t allow water to pass through,
such as a concrete driveway or stairway, or perhaps a wooden structure
next to the lake.

Water flows over impervious surfaces, so pollutants such as nutrients,
pesticides, and sediments more easily enter the lake. Completely
removing surfaces isn’t the only option. Pervious pavers, for example,
in some instances can be used in place of concrete. They’re designed to produce less stormwater runoff than impervious products.

One of the keys to maintaining water quality is to limit the amount of
potential pollutants that enter the water in the first place. If you
still have natural vegetation along the shoreline, keep it. If you
don’t, consider planting it. The vegetation’s root system helps to hold
soil in place, which in and of itself goes a long way toward preventing
erosion, even during strong rain events.

In addition, natural vegetation slows runoff, thus allowing more nutrients
to be filtered out of the water before it reaches the lake (fewer
nutrients, fewer summertime algal blooms).

Many lakeshore property owners use boats or personal watercraft as a way to
enjoy the water. Whether they’re leaving or coming back to their dock,
or out for a cruise, they have a role to play in helping to minimize
shoreline erosion. According to the Minnesota DNR, large wakes can
result in shoreline erosion, impaired water quality due to increased
amounts of sediment entering the water, and a loss of shoreline
vegetation that reduces runoff and provides habitat for fish and
wildlife. 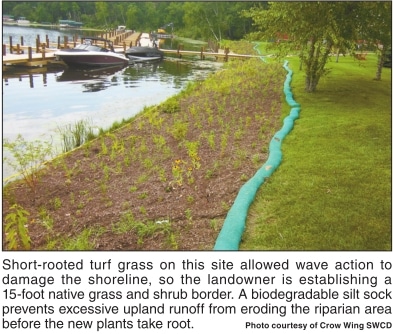 Don’t blow leaves or grass into the water

Some leaves are going to blow into the water on windy days. There’s not much
to be done in that regard (although a thick stand of natural vegetation will block a lot of them). However, there’s no reason to blow
leaves into the lake, or for grass clippings to end up there. Grass clippings, in particular, can result in undesirable nutrients winding up
in the water. If you’re going to mow right to the water’s edge, make sure you’re bagging the grass clippings and disposing of them elsewhere.

Know the regulations for cutting vegetation

It isn’t uncommon for lakeshore property owners to want to cut or remove aquatic vegetation, whether it’s to
improve their access to the lake, their enjoyment of it, or for some
other reason. Before they undertake any work, though, they should make
sure they’re clear on what requires a permit.

Tell others about what you’re doing, and why

Many people who own lakeshore have a desire to protect water quality,
whether their motivation is natural resource protection or financial.
However, they may not know the best way to go about
it, or even understand they have a role to play. The landowner at the
beginning of this article understood his role, and wanted to tell people
about what he was doing. Helping other property owners understand what
they can do to protect the lake may be just the nudge they need to take
action.