Several inches of snow covered the ground, but temps warmed a bit, and sleet and mist were in the air when I exited my truck to hunt with my flintlock in Warren County.

Using the vehicle to block a stiff breeze, I dumped 80-grains of FFg black powder into the barrel and pressed a patched, .50 caliber, lead ball down the muzzle. Adding three grains of “4F” powder to the pan, I quickly pulled the frizzen into the firing position, which simultaneously covered the pan.

A leather flap was flipped over the rifle’s action for added protection. “If it doesn’t fire, that’s okay,” I told myself, “The challenge is fun!” 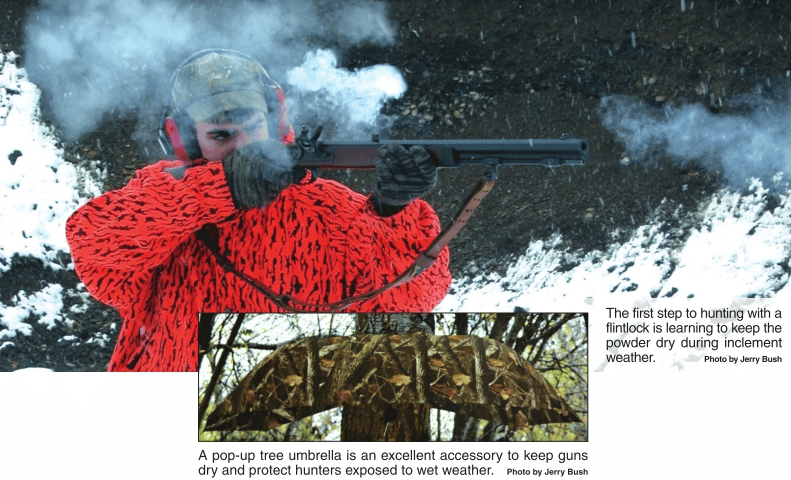 Mist and sleet remained throughout the 34-degree day. I own quality hunting garments, but by 3 o’clock, cold dampness permeated my bones. Some movement would warm me, so I decided to stillhunt toward my truck.

I had not moved many yards when I spotted three antlerless deer galloping my way.

I flipped the leather flap to the side as I shouldered my rifle. The cold caused me to shake but holding the rifle’s forestock against a nearby tree steadied my aim.

As the animals stopped, I pulled the hammer back and aligned the V-notch and bead on the chest of the largest deer. When I squeezed the trigger, a click and fizzle resulted.

Desperately, I flicked damp powder from the pan, but the animals bounded away, with their tails waving goodbye as only a white-tailed deer can do. I had nothing to show for my valiant efforts that day. Maybe a flintlock that doesn’t fire isn’t much fun after all!

Before offering some general, late-season hunting tips, let’s focus on avoiding the experience I just shared.

The leather flap over the hammer and pan was a good thought, but since that hunt, I learned that a small amount of beeswax spread on the pan edges will help the frizzen base seal out water.

A thin film is all that is needed. Too much may work against you.

Eyeglass cleaning cloths will effectively absorb moisture from the flint, pan, and frizzen face. It’s a good idea to remove and replace powder in the pan now and then throughout the hunt. Consider covering the muzzle with electrical tape.

I haven’t found that it affects accuracy, and numerous other shooters recommend it as well. Keeping the muzzle pointed down isn’t only a safety issue, but will also keep water from entering the barrel.

Pop-up, camouflage umbrellas that strap to trees can be purchased, which are excellent accessories to shield the firearm and the hunter.

Though extra challenging, archery enthusiasts can hunt in the late season with a bow and arrow. They will at least know for certain moisture will not cause a misfire.

But it is a difficult time for bowhunters because tens of thousands of deer have already been harvested and the remaining animals are extra skittish after months of pressure.

In addition, the cloaking advantage of foliage is practically non-existent. Archery enthusiasts with compound bows might consider dropping their bow’s draw weight for winter hunts. Cold, stiff muscles do not perform as they do when warm.

I was ecstatic when the Game Commission finally legalized crossbows. Mine has become my go-to, late-season weapon if I hunt on rainy days after Christmas.

It does limit my shots to fewer than 50 yards, but I know that if the animal does come within that range, wet weather will not affect the outcome.

Other tips for late-season hunts are worth knowing. Make every effort to access the woods after fresh snow has fallen. Snow not only exposes fresh beds and scrapes, but it reveals trails currently being used, which may differ greatly from the most popular pathways deer used before mid-December.

Do not believe the misconception that most bucks have lost their antlers or that few legal bucks remain.

Unfortunately, after months of pressure and reduced testosterone levels, the bucks are mostly nocturnal. Hunters still hoping to kill a buck would do well to look for fresh scrapes and predominant bedding areas.

It’s a good tactic to be within eyesight of scrapes during the first and last hours of daylight. Consider slow still-hunting practices for most of the rest of the day.

Resist the temptation to turn your back to the wind. Alert, skittish deer approaching from downwind will likely catch your scent and never show themselves. If you can’t face the wind, at least position yourself crosswind.

Most foliage is gone, but low-hanging evergreen boughs help hide ground hunters. If you choose to hunt from a portable stand, hang it where your silhouette will be cloaked by evergreen trees.

Most cornfields are harvested, but loose kernels remain.

If you have permission to hunt where beets, carrots and pumpkins were planted, you are a lucky hunter.

Some of the vegetables are always missed during the harvest and are highly prized by winter deer.

Hunt inside woodlots, near trails leading to those food sources, because the animals are likely to hang back before shooting hours conclude.