Baudette, Minn. — The Wheelers Point area of Lake of the Woods experienced change recently when four owner-operated resorts were bought for roughly $20 million.

The resorts were purchased by co-owners Joe Swanson and Pipasu Soni, and the focus is to keep the same faces and same priorities under new ownership.

Lake of the Woods is known for its fishing and other outdoor activities such as snowmobiling and hiking through the area’s miles and miles of public land. Swanson and Soni say they wish to promote the popularity of these activities while adding some improvements to make the experience more enjoyable for people who visit the area.

“We bought it because it’s special,” Swanson said. “The secret sauce when buying these resorts was the location and the people. That’s why we’re by Lake of the Woods.”

The journey started in October 2021, when Swanson and Soni traveled to Lake of the Woods to check out properties for purchase. They found four resorts by Wheelers Point and say they were hoping to finalize the transactions by February 2022.

That hopeful deadline was pushed back due to various circumstances, but eventually the team bought Sportsman’s Lodge, Border View Lodge, Wheelers Point Resort, and Rainy River Resort during the spring of 2022.

Swanson and Soni say they met when they were neighbors in Plymouth. Swanson grew up along Minnesota’s North Shore, while Soni grew up in Tennessee. Both had outdoors interests including hiking, fishing, and more. Those interests made the decision to invest in the four resorts an easy one.

“It’s been a fun adventure,” Jeff Andersen, the new general manager of Lake of the Woods Family Resorts, said Dec. 3 on Outdoor News Radio. “What we’re doing is we’re bringing the teams together but keeping the cultures at each individual resort the same. A lot of the same staff still remain and they are great, hard-working people.”

Swanson said the purchase allows all four resorts to share ideas rather than being competitors. One example is that three of the four resorts are sharing one ice road to help the flow of traffic.

Joe Henry, executive director of Lake of the Woods Tourism, said it’s a win-win for both the new owners and the previous owners. He added that there will be more opportunities for the resorts in the future with new ownership.

“The people (at the resorts) I’ve spoken to have been very happy and they feel like they are getting treated with respect,” Henry said. “There’s a
lot of pluses. The majority of the employees who are running these
resorts are the same employees who ran them when they were owned by
individual ownership, so the faces haven’t changed much.” 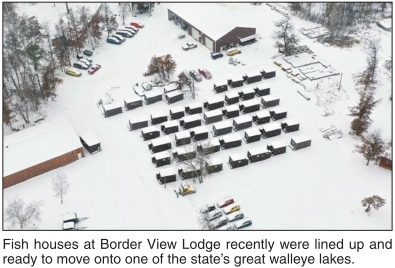 Swanson added that the
focus has been on the behind-thescenes components. They’ve been trying
to work on improving the guest experience, whether that’s making the
system easier for reservations, adding more information on the website,
or improving the food menu for guests.

Swanson said he works only on the business side so he’s finding new ways to
continue improving the experience to show how special Lake of the Woods
is to both first-time visitors or longtime guests.

“People would never believe all the hats that a resort owner has to wear when
they run a business like this,” Henry said. “They work so hard. For the
people who had to run these resorts for years and years, kudos to them
and congratulations on being able to sell their resorts. Again, what a
nice opportunity like this to come in and buy some resorts that are
right in the same area. You get economies of scale.”

Swanson and Soni hired Leisure Hotels and Resorts, a Minnesota-based company,
to run operations of the properties and Andersen is the new general
manager. Andersen is a fishing pro of about 25 years and is highly
regarded at Lake of the Woods.

Swanson and Henry say Andersen is the perfect manager for the collective Lake
of the Woods Family Resorts because he understands the area and can
interact with the community. He also brings great ideas and understands
the vision of new ownership.

“The feeling of being up here is truly special,” Swanson said. “The amount
of space you have up here, it’s like a whole city on ice. That’s what
makes Lake of the Woods so special, and we’re excited for what’s to
come.”