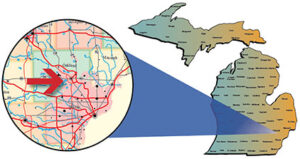 Diversity is the name of the game for anglers heading out on Oakland County’s Cass Lake.

It’s the largest lake in a county that is full of game fish. In a 2018 survey of the status of the fishery in Cass Lake, DNR biologists collected 29 different species of fish.

“Cass Lake provides a quality fishery for many species; that is partly due to the natural shorelines that remain and the high lake volume that supports suitable dissolved oxygen levels in the lake,” wrote DNR Fisheries Biologist Cleyo Harris in a summary of a 2018 survey of the status of the fishery in Cass. “Efforts should be made to protect the remaining natural shoreline around Cass Lake as it benefits many fish species.”

Fisheries biologists captured a dozen species of game fish in the 2018 survey. The lake features robust populations of walleyes, bass, pike, and panfish and also has a fair number of cisco, and a few remnant lake trout. Occasionally a rainbow trout or two show up, likely remnants of an annual fishing derby for which rainbow trout are stocked. There are also plenty of rough fish including carp, bullhead, suckers, and gar.

Located in central Oakland County, southwest of the city of Pontiac, Cass Lake features 1,280-acre of surface water, 28.6 miles of shoreline, and a maximum depth of 121 feet. It features an irregular shoreline, several islands, sunken islands, points, and an array or coves, bays, and canals.

Although it’s the deepest lake in the Oakland County, about 40% of the water in Cass lake is 10 feet deep or less. It has a pretty large shoal area.

The shallow areas are sparsely vegetated, mostly right at the drop-offs. But because the lake is so big, there is still enough vegetation to provide ample fish habitat.

Cass Lake’s stocking history is as deep as its water and dates back to 1933 when bluegill and bass were stocked. Since then fisheries managers have stocked trout, salmon, splake, northern pike, redear sunfish, walleye, even crayfish (as a food source for bass). Since 1982 the focus has been on walleyes.

In the 2018 survey of the status of the fishery, the DNR collected a total of 1,958 fish representing 29 species.

Bluegill was the most abundant game fish collected in the survey. The ’gills ranged up to 9 inches and averaged 5.3. The survey also found good numbers of pumpkinseed sunfish up to 9 inches long, yellow perch up to 9, light numbers of black crappies to 11 inches, and redear sunfish to 9.5 inches.

“Cass Lake offers a quality panfish fishery with a variety of species for anglers to target,” Harris wrote. “Since 2001, Master Angler awards have been issued for two bluegill, two rock bass, one black crappie, and one pumpkinseed caught out of Cass Lake. Bluegill is one of the dominant species in Cass Lake and is the most harvested by anglers according to the 2016 angler survey (Harris 2018). All metrics for the bluegill population suggests a good quality fishery.”

The 2018 fishery survey also found good numbers of largemouth bass to 15 inches, smallmouth bass to 19 inches, walleyes to 24, and northern pike to 30.

The shoreline of Cass Lake is nearly all developed. Bass anglers take advantage of this by fishing around the docks and rafts for largemouths. The best action occurs in the mornings on topwater baits and tubes.

Coles Bay in the northeast corner of the lake, and the area around Wards Point both hold smallmouth bass. Crayfish-imitating baits and spinnerbaits work well for catching smallies.

To catch walleyes, target the steep drop-offs along some of the lake’s deeper holes with crankbaits. Crawler harnesses and jigs tipped with crawlers, minnows, or leeches will catch fish along the breaks and sandy flats.

“The walleye population in Cass Lake provides a fair fishery and has good growth rates,” Harris wrote. “The walleye stocking program was successful and provided a successful fishery in Cass Lake. It is recommended to continue the stocking program at the prescribed rate of 75 spring fingerling walleye per acre (96,000 walleye per stocking) on an alternate year basis because the system has inadequate natural reproduction.”

The only downside to Cass Lake is that it attracts an abundance of recreational boating activity, which makes fishing tough on weekends. Your best bet is to take a mid-week trip to the lake or fish very early on the weekends.

The lone public access site is located at Dodge Park No. 4 off Baywood Road on the north shore of the lake.