• On Nov. 7, ECOs Wood and Doroski responded to a complaint about someone shooting a deer from an ATV in the town of Thompson. During the investigation, the Officers located several pools of fresh blood and a crossbow bolt where the deer was taken. The ECOs also received information from the complainant leading to the location where the deer was moved after being shot. At that location, ECO Wood located a fresh gut pile and the subject who shot the deer. The hunter admitted to shooting the 10-point buck with a crossbow while trespassing on property without permission. The crossbow used to shoot the deer is illegal because it does not meet specifications for crossbow hunting in New York. The Officers confiscated the deer and ticketed the hunter for the illegal take of deer, trespassing, and using a crossbow not lawful for hunting.

• On Nov. 2, ECO Powers received word from a landowner in the town of Allegany that two raccoons were caught in foot-hold traps on his property. In addition, the landowner reported he’d found a tree stand and trail camera set up in the area that he did not want on his property, but first he wanted assistance to free the trapped raccoons.

Officer Powers responded to the area and began searching with only about an hour of daylight remaining. The ECO eventually located the animals and removed the traps. Both raccoons were freed without incident. ECOs are investigating to determine who is hunting/trapping on the landowner’s property without permission.

Almost Made It (Suffolk County)

• On Nov. 5, while monitoring his Suffolk County Police radio, ECO DeRose heard reports of a twin-engine plane crash in North Babylon. Officer DeRose joined other first responders to find the small passenger plane crashed in a local cemetery. Fortunately, the two passengers inside walked away from the wreckage with only minor injuries. ECO DeRose did not observe a fuel spill related to the crash. The plane had run out of fuel less than a mile from its destination airport. 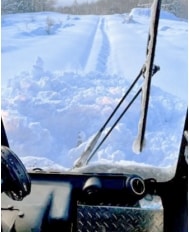 • On Nov. 20 at 9 a.m., Forest Ranger Lieutenant Hogan and Rangers Benzel, Evans, and Hanno responded with Lewis County Emergency Management to help two Diana area residents stranded in a storm that accumulated approximately six feet of snow. One of the two had experienced a cardiac issue. The Long Pond Snowmobile Club used its groomer to break a trail for DEC’s tracked SUV.

At 10:45 a.m., Rangers reached the subject, who was in stable condition, and helped him into a Lewis County Search and Rescue ambulance. His companion followed the ambulance to the hospital. Rangers also assisted a third subject trapped in a hunting camp approximately four miles from a plowed road.

• On Oct. 29, ECOs received a complaint about a group of anglers poaching striped bass and placing the fish at a dock in Howard Beach. However, by the time the Officers received the information, the fishermen already had left the area. The next day, ECOs Milliron and Michalet patrolled Jamaica Bay with members of the U.S. Coast Guard when they received a report that the same boat was out on the water. The ECOs returned to shore and split up to search for the boat. While driving over Cross Bay Bridge, ECO Michalet spotted the boat described in the complaint, notified Officer Milliron, and headed back to the dock. The Officers confronted the anglers, discovered 16 illegal striped bass, and issued 23 tickets to five individuals for possession of over-the-limit striped bass, possession of undersized and oversized striped bass, no Marine Registry, and failure to release fish without undue harm.

• On Nov. 1, while checking anglers fishing for tautog (blackfish) along the Wantagh Parkway bridges in the town of Hempstead, ECO Pabes noticed one angler talking on his phone to another angler using binoculars on the opposite side of the bridge. After the phone call ended, one of the anglers retrieved a bag from his belongings and dumped three blackfish back into the water. Officer Pabes approached the fisherman, who claimed he had not caught any fish. While speaking to the subject, Officer Pabes noticed a large bulge under the angler’s sweater. The ECO requested the subject untuck his sweater and two undersized blackfish fell to the ground. The Officer issued three tickets to the angler, all returnable to Nassau First District Court, for possession of undersized fish, failure to release fish without undue harm, and no Marine Registry.

Undersized and Over the Limit (Richmond County)

• On Nov. 12, ECOs Veloski and Currey joined U.S. Park Police to patrol a popular fishing area in Staten Island. During the patrol, the ECOs observed anglers placing undersized tautog (blackfish) into shopping bags and then hiding the bags under logs, in the sand, and in weeds nearby. The Officers approached the group, questioned the anglers, and discovered a total of 16 blackfish hidden in the area. After determining who caught the fish, the ECOs issued 14 tickets to the subjects for possession of undersized blackfish, possession of over-the-limit blackfish, failure to release without undo harm, and unlawful disposal of solid waste. The anglers are scheduled to appear in Richmond County Court at the end of November.

• On Oct. 28, ECO Johnson responded to a residence in the town of Rochester after receiving reports of multiple deer taken with the aid of bait. The subject admitted to shooting the deer behind his property and claimed the large trough of corn and horse feed in his backyard was intended for birds. A photo of the deer on the hunter’s phone indicated he shot the deer on Sept. 10, well before archery season. Officer Johnson issued multiple tickets to the hunter, including the take of big game out of season, hunting with the aid of bait, failure to tag deer, and failure to report deer harvest. All tickets are returnable to the Town of Rochester Court.

• On Oct. 2, ECOs Parker and Doroski completed a bear baiting investigation in the town of Forestburgh. Utilizing intelligence gathered by Investigators with DEC’s Bureau of Environmental Crime Investigations, ECOs identified an area of State land potentially being baited for bears. After hiking many miles over several days, ECOs located two hunting locations on the ridge that appeared to be baited, as the earth near the hunting stands and blinds was freshly disturbed. ECOs set out just as daylight broke and located an individual bowhunting for bear over bait in one of the suspected stands. The bait consisted of donuts placed in trees, smeared on tree bark, and placed in tree knots.

The hunter initially claimed the donuts, including the large package of donuts in his backpack, were for his own consumption and that he had simply dropped the others. ECOs ticketed the hunter for hunting bear with the aid of bait, failure to display a backtag, injuring trees on State land, littering on State land, failing to label stands/blinds with a name/address, and several other State land offenses. ECOs were assisted by Lt. Buckley who helped process the individual and evidence

• A Delaware County man, reported missing over the summer, may not have wanted to be found. Reported missing on Aug. 31 after failing to return home, multiple law enforcement agencies searched for the man and his vehicle. On Sept. 1, a friend of the missing man spotted the vehicle on a private logging road in the town of Middletown. A Delaware County Sherriff’s Office K9 tracked and located the missing person in good health, harvesting ginseng in a wooded area several hundred yards up the mountain from his vehicle. The man possessed two one-gallon bags of freshly harvested American ginseng. ECO Woodin interviewed the subject to determine if he had permission to harvest on the private property. While the man claimed he received permission years ago, the landowners told ECO Woodin they had not given permission to harvest ginseng on the property. The ECO seized the two bags totaling 41 harvested ginseng roots and charged the man with harvesting ginseng without landowner permission, trespassing, and petit larceny, returnable to the Town of Middletown Court. New York’s ginseng program and laws exists to ensure the survival of the species in the wild, compliance with all federal and international laws and regulations, and the viability of New York ginseng as a valuable forest product. Wild ginseng can only be collected from Sept. 1 – Nov. 30. ECO Woodin with seized ginseng in Delaware County

• On Oct. 22, the opening of the Northern Zone big game hunting season, ECOs Dewey and Nicols patrolled the Lyme Adirondack Timber Property, home to numerous hunting clubs. As the Officers approached a clubhouse to greet hunters, they observed three men butchering a doe with a battery-operated reciprocating saw. During their investigation, the ECOs determined the untagged deer had been shot on the wrong property. The Officers issued tickets for illegal take of deer, possessing a loaded firearm in a motor vehicle, and failure to tag as required.