Wooden boat building is alive and well in Cedarville

There is a secret in Michigan’s Les Cheneaux Islands that’s gaining attention.

And we’re not talking about GPS coordinates for the best places to fish in these waters well-known for perch, pike, smallmouth bass, and splake.

The secret is the Great Lakes Boat Building School in Cedarville. Established in 2005, it’s the only accredited school specializing in the marine industry in the Great Lakes. The school broke ground Oct. 1 on a $3.8 million expansion that will nearly double its 12,000-square-foot facility and potentially more than double its enrollment. Funding came from a $2.7 million grant from the federal Economic Development Administration’s Coronavirus Aid Recovery and Economic Security (CARES) Act, along with a $1.1 million match being raised through donors. Construction will begin in spring 2023.

The school, set in the 36-island archipelago where E.J. Mertaugh established the first Chris-Craft dealership in nearby Hessel in 1925, started as a place for students to learn about the tradition of wooden boat building and repair. The region known as Les Cheneaux is French for “the channels,” referring to the many channels throughout the islands, where generations of residents have relied on watercraft for transportation and recreation, creating a longstanding need for boat repair, supply, and maintenance.

The school has grown from a place where students can learn how to repair and build the wooden boats to now include programs and certifications in a marine services technology curriculum. Two year-long programs – comprehensive career boat building and marine services technology – have taken graduates to jobs around the world. Students get plenty of hands-on experience and placement for graduates is 100%, according to representatives.

“Students don’t necessarily need a background in boats or boat-building, but they do need a good work ethic,” said Nikki Storey, GLBBS president. “Many of them may not know how engines work, but they will after their time here. The handson experience they get here is so valuable, because what they do here is what they’ll be doing when they get out in the field.”

Matt Edmondson, the school’s lead teacher, graduated from the school in 2014 and soon realized he wanted to teach the school’s next generation of boat builders and mechanics. He came back to teach after working in the field for a few years.

Edmondson said students in the boat-building curriculum will build a boat from start to finish – a 13-foot rowboat modeled after the Indian River skiff. 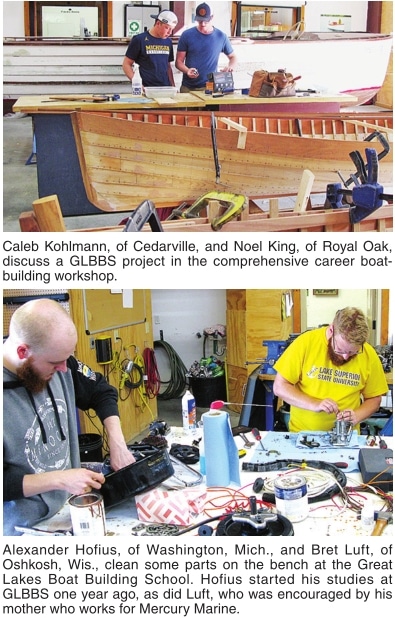 “In the beginning, we used to do contract work, but it became difficult for everyone involved,” Edmondson said. “This is a teaching situation, and the work is slower than it would be elsewhere.”

As the boating industry has grown, the number of skilled technicians has not kept up with the demand for wooden boat construction and repair, nor for mechanical support services. With its boat-building/repair curriculum gaining steam, GLBBS saw a need to train students in the
mechanical field, as well. In 2020, it began offering the marine services technology program through an exclusive certification partnership with Mercury Marine.

All told, students can complete six certifications in marine systems, diesel engines, gas engines, and marine electrical through Mercury and the American Boat and Yacht
Council. Storey said more certifications are in the works, and the school is always seeking partnerships to provide students with more opportunities.

GLBBS graduates in both programs are in demand. This past summer, a student interviewed with a firm in Sweden that owns 1,400 boat slips and has only one Mercury technician on staff. (Mercury is the largest brand in Europe.)

“One technician presents problems, even with just routine service,” Edmondson
said. “You can hardly do three oil changes in a day with just one technician.”

The need for skilled workers goes far beyond oil changes. Twenty years ago,
marine mechanics were much simpler, Edmondson said. Today’s boats come
with a great deal of electronic components.

The expanded school will address that demand, as well, with the coming
addition of a marine electronic technology program that will be the
first of its kind in the nation.

School officials said they see a bright future for students interested in
working with boats and boat mechanics, citing opportunities to
specialize in many areas, including air conditioning, electronics,
mechanical, and more.

“There are only four schools in the country offering the MST (marine service
technology) program, including us, and we’re the only school offering it
in the Great Lakes/Midwest region,” said GLBBS Director of Development Tom Coates.

“We are training 10 to 12 technicians right now, but that’s about to
change,” he said. “Right now, we can accommodate 24 students in the two
curriculums; but with the facilities’ expansion, we’ll be able to bring
in 50 students per year.”

Firms around the world are recognizing the need for more skilled marine
workers and encouraging industry investment in bringing those workers
into the fold. Tom Slikkers, CEO and president of Tiara Yachts in
Holland, Mich., wrote an editorial last June that was published in a
variety of industry publications, including Boating Magazine, in which he encouraged colleagues in the marine industry to support GLBBS and other marine industry schools.

“This is exactly the type of program our industry has been longing for,”
Slikkers wrote. “This school is a reality, not just future hype.”

Others in the marine industry have expressed similar beliefs.

At the GLBBS groundbreaking in October, Steve Van Dam, founder of Van Dam
Custom Boats, Boyne City, and chair of the GLBBS Program Advisory Board,
spoke about the shortage of qualified skilled tradespeople in the
field.

Coates said Walstrom Marine of Harbor Springs hired the first two GLBBS MST program
graduates and is looking for more of them. The firm donated a classic
boat that will be sold with the proceeds to go toward GLBBS programs. He
also said Intrepid, a boat manufacturer near St. Petersburg, Fla., has
350 employees and hopes to build that number to 500. The firm is
interested in GLBBS students for their strong work ethic.

Storey noted that although boat building and maintenance has been a
predominantly male field, more women are joining the ranks. She said
there were three female students at GLBBS last summer and they are
getting just as many job offers as their male counterparts.

Not only is the school providing an important link to a national need, it’s providing local economic benefits.

During the October groundbreaking, Mackinac County Commissioner Mike Patrick
and Clark Township Supervisor Mark Clymer discussed the importance of
GLBBS to the community. Coates said GLBBS has provided equipment at
Cedarville High School, where students in the career and technical
education program can learn about marine engines.

GLBBS facilities include a library resource center for research projects.
Students participate in mock interviews to prepare them for the real
thing at the end of their studies. GLBBS is an accredited school, and
financial aid is available.

The school’s promotional literature states, “If you love boats, the great
outdoors, and working with your hands, an education at Great Lakes Boat
Building School may be perfect for you.”