Sandusky, Ohio — While a still-visible algal bloom remained in western Lake Erie into November, the National Oceanic and Atmospheric Administration (NOAA) finally scored this year’s harmful algal bloom (HAB) as a 6.8 on its severity index. Any reading between 4 and 7 is considered to be significant, with scores over 7 categorized as severe.

The bloom was larger than was observed last year and appears to be the sixth largest HAB since the chart was developed and back-dated to 2002, despite cutbacks in the amount of commercial fertilizer, dozens of wetland construction projects completed thanks to the H2Ohio Initiative, and the greater use of winter cover crops to uptake excessive nutrients on agricultural acreage in northwest Ohio. 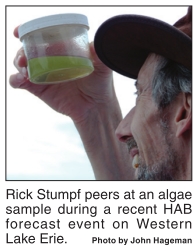 In addition to the longevity of this year’s bloom, another new twist is the appearance of dolichospermum, formerly known as anabaena, one of the troubling blue-green algal species that plagued the lake in the 1970s. It blanketed some of the far western end of the lake later than usual this season, well into November.

While capable of producing microcystin, the same toxin as found in microcystis that prevented residents of Toledo from using their water for three days in 2014, testing showed it remained in low concentrations.

During the annual early summer HAB forecast presentation at Stone Laboratory at Put-in-Bay, NOAA and its ensemble of research partners forecasted an expected 2022 bloom of 3.5, with a possible range of between 2.0 and 4.0.

The index score is based upon calculations of the peak 30-day biomass of algae in the Western Basin of Lake Erie. The highest was 10.5 in 2015, with the lowest measuring 2.9 in 2012.

After a second year in a row of the peak algal bloom reaching twice the size of the forecast, NOAA scientist Rick Stumpf fully acknowledges that something is still missing from the model used to make the annual prediction.

Legacy nutrients that are stirred up from the stream and lake sediments have been ruled out by some investigators. However, some piece of the equation is still missing that would explain the higher than predicted algal biomass being observed compared to what is expected.

The algal forecast is primarily based upon spring Maumee River phosphorous loading calculations and flow readings through the end of June.

By July, plants uptake the lion’s share of the nutrients that may wash off the landscape before the growing season. Yet, heavy rainfall later in the summer can still flush nutrients into the lake from agricultural and municipal sources.

Conservation organizations have identified Concentrated Animal Feeding Operations (CAFOs) as a major source of year-round nutrient inputs from liquified hog and dairy cattle manure spread across nearby fields in much greater concentrations than is used to fertilize row crops.

However, Ohio’s regulatory agencies have opted to ignore this obvious source of non-point pollution as these facilities continue to be approved at sites where they will wash hundreds of tons of nutrients into streams flowing into western Lake Erie.

Until the state is willing to take on these powerful agricultural industries, expect the algal blooms to continue indefinitely.

No measurable quality improvements have occurred in the eight years since Toledo’s residents couldn’t drink or shower in their tap water.