Outdoor news items from beyond Michigan

The DNR released data that shows hunters registered 103,623 deer over the weekend. That compares with 90,023 deer during last year’s opening weekend. The annual average opening weekend harvest from 2017 to 2021 was 102,347.

The higher kill total came despite far fewer hunters in the woods. Total sales of DNR hunting licenses that allow hunters to use firearms to kill deer stood at 539,550 as of midnight Sunday, down about 2% from 551,809 at the same point during opening weekend last year.

Spokane, Wash. (AP) — Conservation groups on Nov. 10 hailed a decision by the Biden administration to resume studying whether grizzly bears should be restored to the remote North Cascades mountains in Washington state.

The National Park Service and the U.S. Fish and Wildlife Service said they
would jointly prepare an environmental impact statement on restoring the
endangered bears to the North Cascades ecosystem.

Humans killed the bears off from the ecosystem long ago, and restoration there
will contribute to the general recovery of the endangered animals in
the Northwest, the agencies said.

“The introduction of grizzly bears into the North Cascades would directly,
and negatively impact the people & communities I represent,”
Newhouse tweeted.

Newhouse said introducing an apex predator to the area would threaten families, wildlife, and livestock.

The agencies began a study of restoring grizzly bears to the North Cascades
through a trapping and relocation process in 2015. But in 2020, the
Trump administration terminated the process without explanation. The
Center for Biological Diversity filed a lawsuit challenging the
termination in federal court in the District of Columbia.

Alaska Firefighters Help Rescue a Moose Trapped in a Home

Anchorage, Alaska (AP) — Firefighters in Alaska got an unusual request for
assistance in late November from the Alaska Wildlife Troopers, but it
wasn’t a mundane cat-stuck-in-a-tree situation. 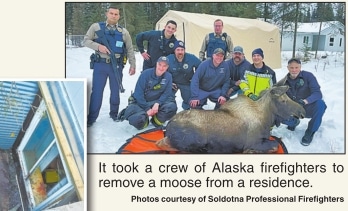 “They were looking for some help getting a moose out of a basement,” said
Capt. Josh Thompson, with Central Emergency Services on the Kenai
Peninsula.

The moose, estimated to be a 1-year-old bull, had a misstep while eating breakfast
Nov. 20 morning by a home in Soldotna, about 150 miles southwest of Anchorage.

“It looks like the moose had been trying to eat some vegetation by the window well
of a basement window and fell into it, and then fell into the basement
through the glass,” Thompson said.

That’s where it was stuck, one floor below ground.

A biologist with the Alaska Department of Fish and Game was able to
tranquilize the moose, but the animal wasn’t completely unconscious.

“He was still looking around and sitting there; he just wasn’t running around,” Thompson said.

Once sedated, the next problem was getting the moose – which weighed at least 500 pounds – out of the house.

Improvising a bit, responders grabbed a big transport tarp that’s typically used as a
stretcher for larger human patients. Once the moose was in position, it
took six men to carry him through the house and back outside.

Thompson said the moose just hung out for a while after they got outside until a reversal agent for the tranquilizer kicked in. The biologist also
treated minor lacerations on the back of the moose’s legs from falling
through the window, the Anchorage Daily News reported.

Once the sedative wore off, the moose apparently had his fill of human companionship and wanted to get back to the wild.

“He got up and took off,” Thompson said.

Juneau Alaska (AP) — A black bear cub in southeast Alaska was euthanized after
it became ill with avian influenza, the Alaska Department of Fish and
Game said.

It is believed that the cub, which was located in Bartlett Cove in Glacier Bay
National Park and Preserve west of Juneau, is the second bear diagnosed
with the highly pathogenic bird flu, the Juneau Empire reported.

Bird flu “passes really easily to poultry, but mammals aren’t really
susceptible to it,” said Dr. Kimberlee Beckmen, a wildlife veterinarian
for the department. “It’s difficult to get, but we suspect the cub
probably ate a bird that died from avian influenza.”

The bear likely became ill because it was a small, young animal with a weak immune system, she said.

Since the virus first was detected in an adult female black bear in Canada in
June, Alaska state officials have tested scavenging animals for it.

So far, it’s been found only in two other animals, both red foxes in Dutch
Harbor and the western Alaska community of Unalakleet.