Looking forward to ‘the walk’

The idea of a “patrol rifle,” a shooting companion that you can take for a walk in the hinterlands, not for any specific purpose but just because, is not new.

A patrol rifle can be anything from your favorite .22 or deer rifle to whatever, and that is OK. But I had a yen to assemble a specific model and caliber that I had in mind for a while because of its handiness and versatility: An H&R HandiRifle in .357 Magnum. 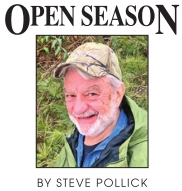 Yes, I am fully aware that Harrington and Richardson has gone by the wayside, thanks to a firearms industry that in recent years has been run – indeed run into the ground in too many cases – by financiers in suits, not calloused-handed gunmakers. The famed, popular HandiRifle was one of the casualties. Luckily, there are thousands of them around on the used market, and when one goes up for sale it goes fast.

I have owned many different HandiRifles over the years, from .22 Long Rifle to .30/06 and the “Hog,” as we called them. These had a 12-gauge rifled barrel bored on a 10-gauge bull barrel blank. My Hog was a real heavyweight, but shot like a dream.

I bagged more deer with it over the years than any other single arm I have owned. I had judiciously slimmed down and nicely refinished the somewhat clubby birchwood buttstock and added a forearm extension, a faux ebony foreend tip that nicely extended the lines of the piece. 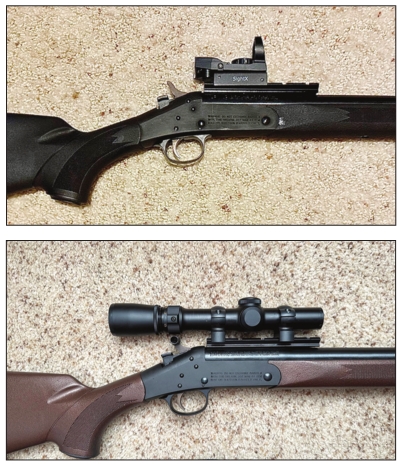 A friend bought it, and while I miss the Hog some, it was replaced by a fine Ruger No. 1 lightweight sporter in .45/70 that I am oh-so-happy with, and which faithfully has been notching deer for some years now. As you can see, I am a big-time single-shot fan and was thrilled when Midwestern states allowed straight-walled rifle cartridges in slug country.

All of which brings me to the .357 Magnum in a rifle. It sits about at the opposite end of the straight-wall spectrum from a powerful .45/70. But it is oh so versatile. It can shoot inexpensive .38 Special wadcutter rounds for plinking or small game, all manner of high-velocity jacketed hollow points for vermin, and up to heavyweight 170- and 180-grain flatnose, hardcast lead loads for deer. My sharpshooter son, Andy, has flattened deer with 180-grain heavyweights in his .357 Magnum pistol, an 8-inch-barreled Colt Python, so I had no reservations about the cartridge for deer in a 22-inch barrel rifle, which puts out 300 to 400 feet-per-second more velocity, and accordingly more energy. In fact, the Buffalo Bore load I am using rivals the power range of the fabled .30-30, which is not legal in straight-wall country.

It took a lot of patient looking to find my HandiRifle in .357. It is among the rarest, if not the rarest, of chamberings offered over the years and when one goes up for sale nowadays, it does not last long. Luckily for me, I won a bid on Gunbroker for an SB2 model, with synthetic stocks, and indeed I was lucky. The rifle was hardly used, in very good/excellent condition, and the synthetic SB2 stocks are far better proportioned than the old birch models.

Another stroke of luck for me was that my HandiRifle’s trigger was totally acceptable –fairly crisp, about a 4- to 5-pound release. HandiRifle triggers, I knew from experience, could be highly variable.

In fact I sent my old Hog back to H&R for a trigger tuneup, which helped. I even had researched an online thread for tuning a HandiRifle trigger using powdered graphite (no disassembly needed), employing repetitive firings on a protected firing pin, just in case. It was not needed.

Which brings up a point. My SB2 was built in Ilion, N.Y., which means that by then Remington had bought out Marlin, which had bought out H&R. Luckily, the actual gunmaking of HandiRifles, before Remington questionably ditched the line, did not suffer in the transfer of money and ownership. I know my SB2 .357 does not have the original “Gardner, Mass.,” H&R collector mystique. But I was assembling a working gun, not a wallhanger or safe queen.

And a fine working rifle it has turned out to be. I prettied it up (my opinion) by removing and painting the stocks with a pleasant (to my eye) swirled cocoa brown finish. I removed the red-dot sight that came in the deal and installed an excellent Weaver Classic V3 1-3X scope. Riflemen who know better treasure this model, also now sadly defunct. Optics ain’t all about magnification, brother.

My patrol rifle has been on the range and does not disappoint. It produces very good accuracy with several different types of ammunition – just fine for a patrol rifle and a cartridge where 150 yards is a long way, no matter the target. I was not building a tack-driving, benchrest behemoth, or a 600-yard gong-bonger.

So, “HandiBoy” – my nickname for this sleek, wellfitting, solid piece – has been on his first walks. We both enjoyed them. And it is going to deer camp as my second, after the beloved No. 1. I suspect I will take it for a walk one afternoon in the deer woods, just to see …