Frozen deer blood looks raspberry-red and clings in clumps to boot laces and pants cuffs, letting you brush most of it away before it melts onto truck mats, porch rugs or other fabrics and items it’s not welcome to stain.

You notice such traits when hunching your back and down-filled hood against 20 mph gusts while enduring the worst snow-filled blows. Quick calculations told me I’d spent six of the past eight hours in my tripod stand since buckling into the crow’s nest at 7 a.m. Judging by the flash-frozen blood, the air temperatures still hovered in the teens. And judging by the fact I’d seen only two coyotes and zero deer, I was enduring my slowest opener in nearly four decades at my cousins’ farm in northeastern Richland County.

Still, I’d felt warm and full of pride about 11 a.m. when reading a text from my daughter, Leah, who was hunting uphill from Cousin Peg’s house. I looked northeast across the Upper Willow Creek bottoms and cornfields to a tall tree uphill of the house, Leah’s approximate location.

Leah
trusted me to fill in the blanks. A doe had walked past her on the
hillside above, and Leah had shot. She then stood up beside a big oak
that had been her back rest, and tracked the fleeing doe’s blood and
hoof prints in the snow. Sixty yards later, she found the doe dead
beneath a web of wild-grape vines.

I texted Leah a quick congratulations, suggested she stay put, and said
I’d walk over at noon to help gut and drag the doe from the woods. With
luck, I’d chase a deer from the pine plantation below, and Leah would
get another shot.

As with most such plans, the deer didn’t cooperate. But no big deal. After
arriving, I congratulated Leah with a hug and high-five, and did some
more calculating.

“Let’s see. You didn’t get a deer last year after you got out of the Navy, and
you last shot a deer when you came home for Thanksgiving in 2013. Man,
it’s been nine years since your last kill, huh? I guess 14 years in the
Navy didn’t give you much time to hunt deer in Wisconsin.” 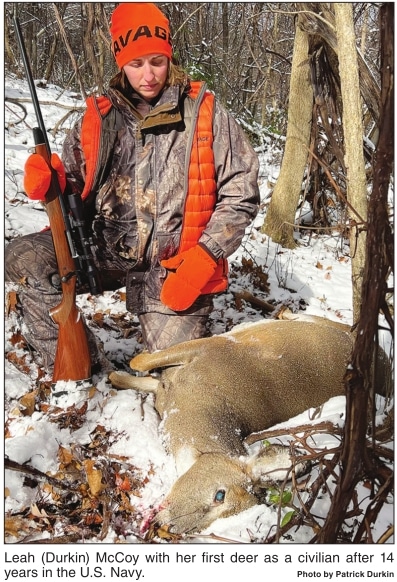 Nope. I studied the deer, judging it to be 18 months old. A divot in its side, astern the “elbow,” marked her bullet’s entry wound.

“You haven’t forgotten how to shoot,” I said.

“Yep. Tell Doug Duren I shot her right in the pocket,” Leah replied, smiling at an inside joke between the three of
us. Our friend Doug, in nearby Cazenovia, likes a good hunting story,
and laughs whenever Leah retells the tale of a long, cold, futile
tracking job in December 2001. The hunter we helped that night insisted
he had shot the deer “right in the pocket” behind the shoulder, even
after all sign suggested it was a flesh wound to the brisket.

With Leah’s doe now underfoot, she replayed the morning’s hunt. She said
several deer passed by on the hillside earlier, but she couldn’t get a
shot from the treestand I hung farther downhill.

We had never hunted the site before, so I had guessed about the deer’s daytime travel patterns.

When a big buck passed by safely about an hour later, Leah climbed down,
walked uphill 50 yards, dropped a cushion at the foot of a giant red
oak, and started over. The doe soon paid for the lessons the other deer
taught Leah.

We then gutted the doe, attached a pull-rope, and dragged it downhill to my
truck in Peggy’s driveway. My feet and hands felt warm for the first
time all day. Leah then went inside for lunch while I returned to my
tripod stand.

About 3:15 p.m., I spotted a deer bounding downhill into the neighbor’s
brush-choked black-walnut stand. Deer often move from there to my
cousins’ fields late in the day, some years targeting corn, and other
years alfalfa or soybeans. Another deer trotted in minutes later. My
binoculars confirmed both were fawns, young-of-the-year deer sometimes
confused for 18-monthold yearling does.

About 4 o’clock the fawns edged closer to the property’s fence line, and
disappeared into thick brush. Two antlerless deer moved my way along the
fence minutes later. At first I thought it was the fawns re-emerging,
but my binoculars revealed the long bottle-nosed look of adult does.
Seconds later they dodged hard right and darted away when a bigger deer
approached.

A buck! My binoculars revealed it was no ordinary yearling or 2½-year-old
spindle-rack. Its chest was deep and broad, and its head carried wide,
dark antlers.

I raised my .308 lever-action, dialed its scope to 7X and watched the trio
bouncing about the brush 125 yards away, heading for the creek where
they might cross to my cousins’ land.

Sure enough, the first doe descended the creek bank, stopped to drink and
then climbed into the narrow woods bordering the corn. The second doe
repeated those moves, confirming I had a clear shot after they crossed
over. Snugging the rifle’s stock to my shoulder, I slipped off the
safety and centered the cross-hairs where the buck should cross.

But it never did, and none of the deer stepped into the field. Where they
went, I’ll never know. I could only unload my rifle at dusk, and walk
back for dinner and a beer.

Stopping outside Peggy’s basement door, I swiped the clumped deer blood from my
pants and boot laces before enjoying furnace-warmed air for the first
time in 11 hours. I then smiled to myself and stepped inside,
anticipating the storytelling that would soon resume.

It’s nice to have Leah home once more, to embrace her companionship, boast
of her shots, and picture some-day hunts with grandchildren.