It doesn’t matter where you live in the ice-fishing belt: A walleye is a walleye, and seasonal winter moves and changes happen for these fish just as they do during the open-water period.

Where you’ll find fish during first ice is typically not where you’ll find walleyes during the middle or tail end of the ice season. There always are a few exceptions. Understanding this winter life cycle will tip the odds in your favor and ultimately allow you to put more walleyes atop the ice from now until season’s end.

That first walkable ice of the season arguably provides the most consistent walleye activity you’ll encounter all winter. This period is an extension of the really good fall feeding binge that happens with walleyes most years.

They tend to remain piled up in big numbers and feed heavily, more times than not in shallow water. Think about the last productive spot you were at in the boat, or spots similar to it: That’s where you need to start looking.

Shallow is a relative term and will vary from one lake to the next, but the most aggressive fish you’ll find at first ice will remain in less than 15 feet of water, at times much shallower, just as they were in the fall.

Work shallow points, shoreline breaks, flats, and even remaining weed edges. These spots are often adjacent to deep structure, which is the next stop for walleyes during their winter progression.

Again, these will be active fish with feeding windows well beyond the traditional sunrise and sunset periods, so don’t be afraid to work them with aggressive presentations.

Be mobile during the day and cover water, ultimately picking off those aggressive midday feeders. During the process, you’ve likely set yourself up for a solid evening of walleye fishing, too. 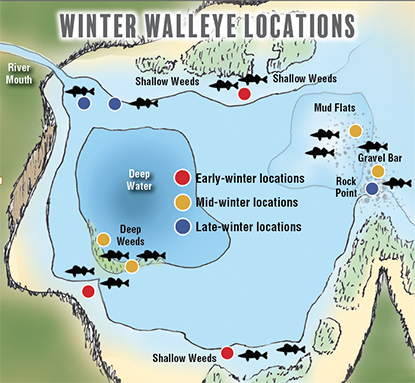 By nature, the majority of walleyes slide off shoreline structure in search of main-lake habitat and forage opportunities. Those long feeding windows are reduced to low-light periods, and walleyes tend to be more spread out.

Expansive pieces of main-lake structure – gravel bars, mud flats, rock reefs, humps, and even a deep wall of weeds – are all targets. Look for turns and fingers, any type of diversion or shift on a given piece of structure. That’s where the bulk of your midseason, offshore walleyes will relate.

Implement the old one-two approach with your presentations. Use jigging spoons and deadsticks. You’ll often spark interest with a jigging spoon, but more times than not, they’ll hit the more natural minnow/deadstick combination in the hole next to it.

Electronics are a huge part of this midwinter, off-shore structure scenario. These fish tend to roam and often suspend in the water column. Without the aid of electronics, you’ll miss those higher fish, which are often a bit more aggressive.

The feedbags return a bit during the latter stages of the ice-fishing season as walleyes again start to move shallow to prepare for their spawning process in the spring.

It’s part of their natural progression under the ice, but this period can be frustrating for anglers because walleye location and activity varies.

Expect to encounter the most unpredictable walleyes of the entire winter season during this late ice/pre-spawn period. The fish are driven by warming water, a natural internal clock that tells them they need to move, and daylight length.

The problem is that those three characteristics don’t always happen simultaneously, which means you tend to come across smaller pods of fish or individuals. There really isn’t a blueprint to work. It’s a roll of the dice!

Look for shallow to mid-depth rock or gravel, points, and sandy shoreline breaks to hold fish. The mouths of bays or inlet and outlet areas, as well as spots where they’re likely to spawn, should hold late-season walleyes.