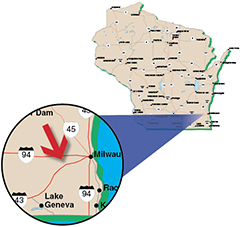 While anglers in southern Wisconsin have fewer lakes to choose from than their counterparts in the northern part of the state, southeastern Wisconsin’s Waukesha County has its share of good fishing lakes, including some big lakes like Lac La Belle, Oconomowoc, Okauchee, Nagawicka, Pewaukee, Pine, Beaver, and Muskego, to name a few.

It’s easy to get distracted by those bigger, more well-known lakes, but Waukesha County also has some smaller lakes that anglers might want to get to know a little bit, especially during the ice fishing season.

All three lakes have some outstanding attributes for being small waters in a very urban setting. All three offer good fishing opportunities winter or summer.

During the summer, the Genesee lakes are a great place to get out of the wind if anglers are getting bounced around on the big lakes. In the winter, the small lakes freeze over earlier, giving ice anglers a chance to get out sooner than they might on the bigger lakes in the area.

All three lakes are known for having healthy populations of northern pike, largemouth bass, and panfish. The lakes produce nice-sized fish of each species.

Lower Genesee Lake is often stocked with trout by the local DNR fisheries team because of its depth and dissolved oxygen levels at those greater depths. In 2021, the DNR stocked 5,057 adult brown trout in Lower Genesee. The lake is stocked with trout almost every year to provide a surprise bonus fishery for anglers who aren’t familiar with the 62-acre lake that has a maximum depth of 44 feet.

The lake has also been stocked with brook trout and rainbow trout in previous years, but the trout available for stocking largely depends on supplies available for the DNR hatchery. Brown trout are the most commonly stocked trout, followed by rainbows, then brookies. If at least two types of trout are available, the number of stocked fish usually runs about 7,000 to 8,000 per year. Lower Genesee has a three-trout daily bag limit and 9-inch size limit on trout. The trout season overlaps the game fish season.

Local anglers consider the Genesee trio as sort of sleeper lakes even though they sit in the densely populated Waukesha County because anglers with bigger boats stay away from the small lakes. Upper Genesee probably sees the least pressure of the three lakes because there is no boat landing. Upper Genesee has walk-in access only for small crafts or anglers fishing the shorelines while wearing chest waders.

Middle Genesee doesn’t have the greatest access, either, but fishermen can launch a boat there. Lower Genesee is the most easily accessible of the three lakes; Lower’s landing was renovated about eight or nine years ago and has a decent launch. All of this means Upper and Middle are great options for ice fishermen who don’t mind walking a little bit to reach some decent fishing.

Boat traffic between Lower and Middle is not possible. There is a seepage between the two lakes, but there is no open water connection that would support boat traffic.

All three lakes provide good panfish action based on anecdotal reports from fishermen who visit the lakes regularly. Legend has it that anglers have caught northern pike into the high 30-inch range and largemouth bass up to 21 inches on Upper Genessee Lake.

Lower Genesee gets the most fishing pressure because of its improved boat landing. Ironically, it also has the largest pike, when compared to Middle. Middle Genesee is stocked with northern pike every year. Lower Genesee is not stocked with any fish other than the trout mentioned earlier. The DNR does survey Middle and Lower, but surveys on Upper are difficult because of the lack of boat access. Those surveys have never turned up smallmouth bass nor muskies, but a walleye was once netted in Lower Genesee, but none of the lakes are known to sustain a walleye population.

There was no pike estimate available for Middle because of a small sample size, but 12%  were longer than 26 inch limit. The largest measured 40 inches. The bass profiles always look good for Middle and Lower. Lower has a high density population, but the biggest bass went almost 22 inches. In Middle Genesee, the crew caught fish up to 20 inches.