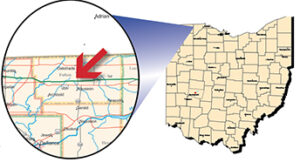 Delta, Ohio – The two reservoirs in this Northwest Ohio city supply nice, clear drinking water to the city of Delta but  neither will make anyone’s list of top fisheries.

Relatively small at 39 and 50 acres respectively, Delta Reservoirs No. 1 and No. 2 serve as an outlet for nearby Toledo anglers traveling just west of the metropolitan area.

Delta No. 1 was excavated in 1933 by the village of Delta to serve as its municipal water supply. It is shallow and fertile, with heavy vegetation.

Northern pike were stocked through 1991, but planting was discontinued because of poor survival and recruitment.

Channel catfish stocking was discontinued after 1992 because of habitat problems, according to the ODNR Division of Wildlife.

The largemouth bass population is high, but fish are slow-growing and generally small, with 6-10 inches being the most common length range. But, for catches per unit of effort, Delta No. 1 at one point ranked in the top 25 of all northwest Ohio reservoirs, said Mike Wilkerson, fish management supervisor for the Division of Wildlife in northwest Ohio.

“No. 1 has better bass,” Wilkerson said. “It’s not a true upground like No. 2 is. There’s not really an improved (boat ramp) on No. 1, but you can fish the entire shoreline around both of them. No. 1 is more of a pond-type situation where you’ll get bass, catfish, and bluegills. There’s better growth rates in (No. 1)”

Asked what species he would recommend fishing for here, Wilkerson said far and away largemouth bass.

Bluegills also are very numerous but slow growing, and most fish are less than 5 inches.

Delta No. 2  was constructed in 1984 and serves as both a water supply and for recreational purposes. It is the deeper of the two reservoirs, topping out at 50 feet in some spots, said Bryan Kinter, a fisheries biologist for the Division of Wildlife in Findlay. Water clarity is high; the bottom is clearly visible in 20 feet of water throughout most of the year. The lake is very infertile, reducing fish populations, according to the Division of Wildlife.

Reservoir No. 2 is quite clear, said Wilkerson.

“The water is super clear,” he said. “You can see 15-20 feet down in the water there. If you can fish those conditions, that’s quite different than most other places in northwest Ohio and the rest of Ohio for that matter.”

Yellow perch, bluegill, and crappie populations are low, and growth among the species is poor.

Rainbow trout of catchable size are stocked in the spring for an interesting variety. About 2,000 of these fish are stocked every year, although future stockings of rainbows here is in doubt due to a new Division of Wildlife plan to alter where it stocks trout in the spring.

Saugeyes were stocked here until 2005, though that practice was stopped due to diminishing returns, according to the Division of Wildlife.

“We just weren’t getting any returns on our gill netting up there,” said Wilkerson. “Historically, it’s never done well for survival of the young (saugeyes). They just didn’t grow very much.”

Yet, Delta No. 1 is far and away the superior fishery.

“Nice bass have been taken from both reservoirs,” notes writer Tom Cross in Fishing Ohio. “I wouldn’t hesitate to fish either of them.”

“We hear reports of pike every now and then,” he said. “But, it’s not a destination fishery.”

Channel catfish are also an option, though they are no longer stocked in either reservoir.

“Especially up in our area, we’ve really backed off on channel catfish stockings in a lot of places because recent research has shown that these things can live 20 years and they often do,” Wilkerson said. “We see fairly slow growth rates on them, so we’re backing off on places that we’ve sampled for catfish where we see decent growth rates.”

For boating anglers, only electric motors are permitted. Delta No. 2 does have a concrete boat ramp on it, primarily for car top boats.

Ice fishing is permitted at both reservoirs.

The older reservoir No. 1 has an abundance of shoreline cover, overhanging trees, and brush.

“You can fish from the shoreline all the way around both of them,” Wilkerson said.

“They get a fair amount of pressure,” he said. “Now, it’s nothing like a Pleasant Hill as far as the number of hours spent fishing it. But, it’s consistent because it’s local to the Delta area.”

Reservoir No. 2 is a true upground with a large limestone rock and boulder shoreline and a fishing pier. The reservoir averages 30-35 feet deep with some deep 50-60-foot pockets. There are a few shallow rock reefs in the lake, and over the years fish structures were anchored to those reefs at specific locations.

Not much goes on in the way of stocking these two reservoirs, said Wilkerson.

“We’ve cut back quite a bit, just because nothing really grows in there,” he said. “They’re pretty clear and not a lot of production in those lakes.”