A look at the top trends in modern blackpowder hunting

The introduction of the Knight MK-85, in 1985, is widely recognized as the beginning of the modern muzzleloading era in terms of developing more “user friendly” rifles.

Company founder Tony Knight improved on a 17th century design that moved the percussion cap, nipple, and hammer from a sidelock to directly behind the chamber, where it was sheltered from rain, snow and spark-robbing humidity to introduce spark to the propellant reliably and consistently. 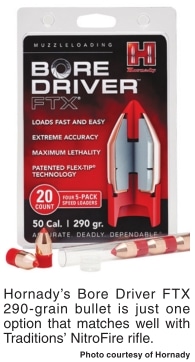 He added an innovative knurled safety on the muzzleloader’s plunger-style hammer that alleviated concerns about a negligent discharge with a simple twist of the knob.
There also was a trigger safety. Receivers were drilled and tapped for
scope mounting. Sling swivel studs and a recoil pad rounded out the
design.

The popularity of Knight’s rifle spurred companies to begin offering inline
muzzleloaders. From the earlier spring plunger Knight models, we’ve had
bolt actions, falling-bock inlines and break-action inlines, which are
currently the most popular.

During the next three decades, hunters have seen numerous technology and
design innovations in rifles, powders, bullets, and accessories.

In 2020, Federal Premium, Hodgdon, and Traditions combine to produce the
NitroFire muzzleloader system. While it looks like a typical
break-action muzzleloader, the Federal Premium/Traditions NitroFire
collaboration pioneered the use of the Firestick encapsulated powder
charge from Federal Premium using clean burning Hodgdon Triple 8 powder.

Federal Premium FireStick is the critical component of this ignition system. It
significantly changes the way a powder charge is loaded and alleviates
hunter concerns regarding reliability, consistency and safety.

Loading the bullet is done in typical muzzleloader fashion through the muzzle
with a ramrod. The bullet is pushed down the barrel and seated on a
“shelf” within the barrel that stops the bullet to provide a consistent
starting point.

Once the bullet is seated, the NitroFire action can be opened with the
release button located near the trigger guard. The Federal Premium
Firestick is then inserted into the breech.

Finally, a 209 primer is placed into the primer pocket of the Federal Premium
Firestick. Close the NitroFire and the muzzleloader is loaded. It can be
easily and safely unloaded by opening the breech and removing the
Firestick.

Three loaded FireStick charge levels are now available:
80, 100, and 120 grains. FireSticks are sold in 10-count packs. Users
can expect projectile velocities equal to, or better, than equivalent
loads from other types of in-line muzzleloaders. Learn more about
Hodgdon’s Triple 8 muzzleloader powder on the company’s website.

Even though bullets are loaded from the muzzle, the design and the charge it
uses are so revolutionary that the current ATF classification requires
purchasers file a Form 4473 with a licensed firearms dealer.

Currently, a few states do not allow the NitroFire to be used during dedicated
muzzleloader seasons because of this ruling. Hunters should check the
regulations in their home state, although the NitroFire may be legal for
use for traveling hunters in their destination states. 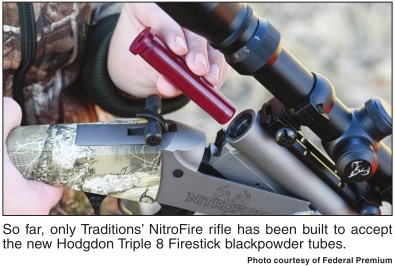 When muzzleloader hunts require longer shots, it can’t hurt to have a CVA Paramount shouldered up.

The CVA lineup includes the original Paramount, Paramount Pro and now the HTR, which is an acronym for “Hunter.”
At first glance, the HTR may surprise some folks, since it appears to
be a bolt-action rifle. Its centerfire appearance is accentuated by the
lack of a cleaning/loading rod that usually is cradled under the barrel
in a compartment fabricated into the fore-end of the stock.

Instead, the HTR includes a collapsible, carbon fiber field loading rod complete
with a handy pouch for ease of deployment. Apparently, engineers at CVA
determined that to achieve the highest accuracy possible, the ramrod
should not be attached to the barrel because it negates some of the
benefit of the 26-inch free-floating Bergara barrel. They found that
lack of barrel contact with the stock or a ramrod reduces vibration and,
thus, increases accuracy.

The safety is a two-position toggle that moves forward to fire and back for
safety. Just opposite of the safety is a button on the action frame to
depress that smoothly releases the bolt for removal. The HTR trigger is
adjustable from 2 to 4 pounds, with a factory setting at 3 pounds. The
receiver is drilled and tapped for Remington 700 short-action scope
bases.

The CVA Paramount not only looks like a centerfire, but also performs like one
with muzzle velocities reaching beyond 2,500 fps. The caliber selection
also is somewhat surprising. CVA testing has led them to choose the .40
and .45 as the calibers for best velocity, efficiency and precision.

CVA joined forces with its sister company, PowerBelt Bullets, on bullet
design. To ensure the Paramount series, including the HTR, shoots
accurately at extended distances, they designed the ELR bullet
simultaneously.

The smaller bore diameter of the .45 allowed a projectile of the same
weight for a .50 to be designed longer. This allowed engineers to
lengthen and taper the projectile to create a bullet with a .333
ballistic coefficient when shot from a 26-inch barrel with a 1:22-inch
twist rate.

CVA used Blackhorn 209 propellant for its velocity and consistency, then
added the VariFlame adapter – a device that securely holds a large rifle
primer. CVA discovered early that standard 209 primers tended to swell,
making them difficult to remove after igniting the hotter Blackhorn
loads.

CVA offers load information for Blackhorn 209 in volume and weight
recommendations. For best results, loading by weight is advised.

To load the rifle, pull the bolt rearward, use the VariFlame rifle priming
tool and insert the primed VariFlame into the breech plug. Close the
bolt and it’s ready to fire.

Another bonus to the Blackhorn 209 system devised by CVA is that a dry patch
between shots and a damp patch every 10 shots, is the recommended
cleaning. 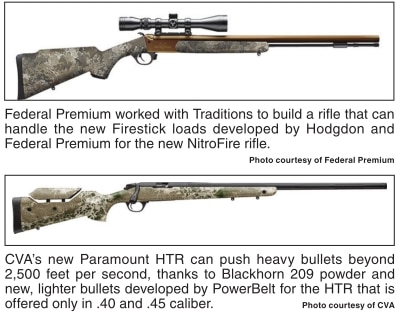