Does a state-record smallie lurk in Little Birch?

Before you can even talk about what you’ll catch in Todd County’s Little Birch Lake, it’s probably just as important to take a look at the system’s physical characteristics. 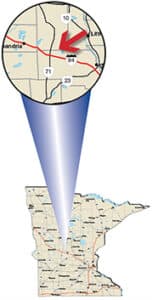 Little Birch consists of some unique structure, including sharp-breaking shorelines that drop quickly into deep water, a diverse  plant community with extensive areas of submerged and emerged vegetation, and a bottom content that ranges from sand and gravel to muck.

According to Eric Altena, DNR fisheries supervisor in Little Falls, Little Birch is a solid multi-species lake, in which a single piece of structure often holds a mixed bag of fish.

“The shorelines drop fast and you’ll find thick vegetation right next to 20 feet of water,” Altena said. “There’s some unique habitat in certain areas and that’s what makes it a productive lake.”

While still considered a fine walleye fishery, overall numbers aren’t as strong as they once were and don’t compare to its productive walleye neighbor, Big Birch. The cupboard isn’t empty here, but stocking efforts in recent years haven’t provided the return they historically have.

Walleye fry are stocked annually in Little Birch and if they don’t take, fingerlings are also stocked when available. Unfortunately, neither have added much to walleye recruitment in recent years.

The number of short walleyes in recent DNR surveys has been minimal and concerning. Improved water clarity since zebra mussels showed up in the lake, increasing numbers of northern pike, and inadequate forage, mainly a decline of perch, are likely having a negative effect on the lake’s walleye population.

“We used to have good success with stocking in there and we’re looking at new strategies,” Altena said. “There’s still plenty of walleyes to be caught; numbers just aren’t as good as we want to see it.”

Largemouth and smallmouth bass currently will provide your most consistent fishing on Little Birch. Both bass species are available in healthy numbers, which includes a very good size structure.

There’s plenty of rock habitat for smallies to thrive and quality vegetation for largemouths to maintain high numbers of both. Largemouth and smallmouth bass over 18 inches in length are sampled regularly in surveys.

Rex Campbell, owner of Nancy’s Bait and Tackle in Grey Eagle, says the bass fishing, especially the smallmouth bass opportunities, might be some of the best not just locally, but across the entire state. It’s truly a phenomenal fishery.

“A lot of people don’t realize how high the smallmouth population really is in Little Birch and just how big some of those fish get,” he said. “ I wouldn’t at all be surprised if someone caught a state record smallmouth out there. The potential is there.”

Campbell added that Little Birch is one of those lakes where you can fish for just about anything and almost always catch numerous smallmouth bass in the process.

Bluegills tend to be more abundant than crappies; they also tend to provide a better average size, and are targeted more than crappies on a year-round basis.

According to Campbell, ’gills in the 8-inch class are fairly common with some bigger fish mixed in. He says the lake also has nice crappies, they just aren’t as easy to find much of the year.

“There were big sunfish caught out there this summer, nicer than what some people might think,” he said. “You’ll find bigger crappies, not huge numbers, but they do get fished a lot in the winter.”

The lake does have some bigger pike in it as well, but they’re often overlooked due to the abundance of hammerhandle variety fish.

Little Birch also holds a population of channel catfish, which seems to be a growing angling opportunity. Altena says anglers have been targeting them more recently.