No better spot for fall trout fishing than Kettle Res. 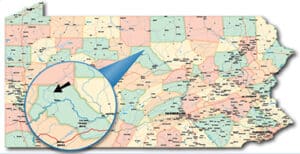 You don’t have to have a soul to fish at Kettle Creek State Park, but if you don’t, you’re missing out.

This park, located in western Clinton County, is among the most beautiful of places in the Keystone State. Surrounded for the most part by Sproul State Forest – the largest forest in the state system – Kettle Creek is a secluded, mountainous treasure.

Something like 94% of the Kettle Creek watershed’s 245 square miles is publicly owned.

You could be excused for visiting and doing nothing more than sitting back and taking it all in.

But then, you’d miss out on some fine fishing.

Kettle Creek and 167-acre Kettle Creek Reservoir – as well as Kettle Creek Dam, a 7-acre impoundment on the creek dating to the Civilian Conservation Corps era of the 1930s – all offer terrific trout fishing.

They’re all listed among Pennsylvania’s Best Fishing Waters for stocked trout. The reservoir is noted for some of its warmwater fishing, too.

Kettle Creek itself is stocked through much of its length in this part of the state. The portions that flow into the park from the north and back out from the south typically get fish three times each spring, once each in March, April and May. That’s a mix of brown trout, rainbows and golden rainbows.

The creek, where it flows through the park, is managed under general statewide regulations, meaning there are no restrictions on tackle type. And people do fish here with everything from bait to lures to flies.

But fly-anglers are maybe more common here than on other streams managed similarly, simply because of the bug life.

Kettle Creek is a freestone stream, but it’s pH levels typically hover right around 7. That’s perfectly neutral and more reminiscent of a limestone stream. What that means is bug life is abundant; there are assorted mayfly hatches throughout the year.

Plus, the stream is wide enough in many places that casting is easy. Add in an abundance of roadside parking and the stream’s gentle grade, which makes it easy to wade, and this is water suitable and accessible for everyone.

Anglers who want to explore can also find wild trout in this area. The portion of Kettle Creek north of the reservoir – as well as all of the tributary streams in that area – are classified by the state as “exceptional value.”

There’s no larger contiguous chunk of Pennsylvania with that much clean water in one place.

Best of all, most of it holds wild brook and brown trout.

Downstream of the reservoir, meanwhile, there’s Kettle Creek Lake. It’s a small impoundment on the stream, right next to the state park’s Lower Campground. Some people put small boats on it; it’s also a good place to fish from the bank and has an ADA accessible fishing pier.

For as good as all that is, anglers who visit shouldn’t overlook Kettle Creek Reservoir. Also known as Bush Dam – named for Alvin R. Bush, a one-time lawmaker – it’s long, stretching about two miles end to end, and narrow. It’s also relatively shallow for the most part.

But it holds trout through much of spring, especially along the eastern shore, opposite the park’s one boat launch. The water’s a bit deeper there, and cooler, too, courtesy of some inflow from Sugar Camp Run.

That area is best reached by boat. Canoes, kayaks and smaller boats with shallow draft are perfect. Many daytrippers bring their own. But a concessionaire rents boats seasonally, or – with a permit – anglers can moor their boats on the shore.

The lake is open to trout fishing year-round, though with special rules in place at certain times. From Sept. 6 through Feb. 20, “extended” season rules apply, limiting anglers to three fish per day. All fishing is catch and release only from Feb. 21 through opening day of trout season.

Right now is a good time to look for those fish, too. The Pennsylvania Fish & Boat Commission stocks the lake with rainbow trout each fall. This year’s stocking, as of press time, was scheduled to have taken place on Oct. 4.

There are other fish to take in the lake, as well. The reservoir is relatively fertile, all things considered, and its largemouth bass benefit. Growth rates for those fish are, according to Fish & Boat Commission biologists, almost surprisingly high. The number of bass here is likewise strong.

Panfish populations are also good in Kettle Creek Reservoir. Yellow perch are a somewhat unlikely star, but there are lots of bluegills and pumpkinseeds, too, along with some bullhead catfish.

A map available online from the Fish & Boat Commission shows the location of fish-holding habitat structures in the lake. Those are good places to target the bass and panfish.

Add it all up and the question is not whether you should visit and fish Kettle Creek State Park, but why you haven’t already.

Kettle Creek State Park is located in Clinton County, about 16 miles east of Renovo. State Route 4001 cuts through the park; reach it via Route 120 from the south or Route 144 from the north.

Visitors can stay here in either of two campgrounds. Upper Campground overlooks Bush Dam and has 27 sites, some with electric hookups, and vault toilets.

Lower Campground, by Kettle Creek Dam, has 41 sites with electric and a modern shower house.

Both are open from the first Friday in April. Upper campground closes in mid-October, Lower Campground in mid-December.

WHAT YOU SHOULD KNOW: Kettle Creek is surrounded for the most part by Sproul State Forest, the largest forest in the state system.

The creek, where if flows through the park, is managed under general statewide regulations.

Gas-powered motors are prohibited on the reservoir.

HOW TO GET THERE: State Route 4001 cuts through the park.